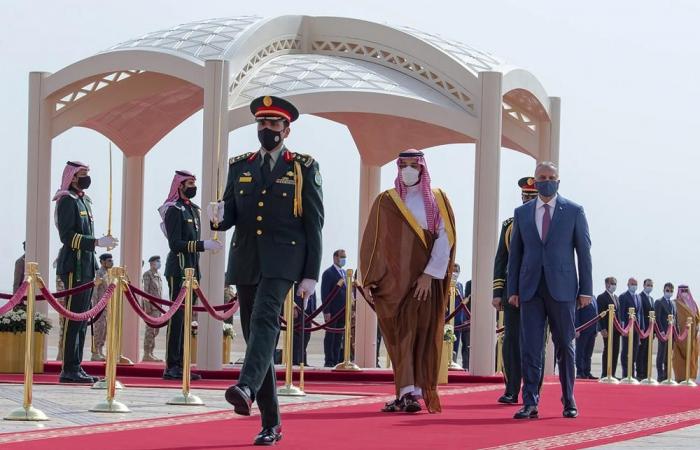 You are now following the details of the Iran, Saudis hold talks in Baghdad, few expect quick results news and now we leave you with the details

Mohamed Nass - Cairo - BAGHDAD (AP) — A first round of direct talks between regional rivals Saudi Arabia and Iran signaled a possible de-escalation following years of animosity that often spilled into neighboring countries and at least one still-raging war. But few expect quick results.

The talks, hosted by Iraq earlier this month, were confirmed Tuesday to The Associated Press by an Iraqi and a Western official in Baghdad.

They came as the Biden administration paves the way for re-opening diplomatic channels in the region. Saudi Arabia is recalibrating its regional position after losing an unflinching supporter in President Joe Biden’s predecessor, Donald Trump. Iran, meanwhile, has calculated that a gradual detente with Riyadh, a long-time US ally, will work in its favor during renewed nuclear talks with Washington and world powers.

Saudi Arabia has sought talks with Iran as the kingdom tries to end its years-long war in Yemen against Iran-backed Houthi rebels. In recent months, the Houthis have increasingly launched missiles and bomb-laden drones at the kingdom, targeting crucial sites and oil infrastructure. Ending that war could be a bargaining chip for the Iranians as they seek sanctions relief from from nuclear talks in Vienna.

The hosting of Saudi-Iran talks is also a significant step for Iraq, which has ties with both the US and Iran and has often borne the brunt of Saudi-Iran rivalry.

A senior Iraqi official said recent trips by Prime Minister Mustafa al-Kadhimi to Riyadh and the United Arab Emirates have been key in bringing Iranian and Saudi interlocutors to the table.

Details of the initial meeting, first reported by The Financial Times, have been sparse. The thorny subject of the Yemen war figured prominently, the Iraqi official said. The Saudi-Iran rivalry has played out on multiple fronts, mostly in Yemen, as well as in Iraq and Lebanon — both home to powerful Iran-backed militias. A breakthrough in Iran-Saudi talks could have far-reaching repercussions in those countries and across the region.

It was not clear how much progress, if any, was made in the talks, but the Western diplomat suggested there will be more meetings. The pro-Iran Lebanese newspaper, al-Akhbar, said a new round of talks would be held in Baghdad next week, following a “very positive” first meeting.

“My understanding is that these talks will be ongoing and mediated by Baghdad,” the diplomat said. Both the diplomat and Iraqi official spoke on condition of anonymity because they were not authorized to discuss the secretive contacts with the media. They declined to elaborate, saying they wanted to give Iraqi mediation efforts a chance to succeed.

Neither Iran nor Saudi Arabia have offered official confirmation that the talks took place, though Iranian officials have alluded to them, and welcomed them.

The Iranian ambassador to Iraq on Tuesday praised Baghdad’s recent diplomatic efforts, hinting at the Saudi-Iran talks without mentioning the kingdom.

“It seems that the regional and international situation has created a more positive atmosphere for the resolution of some problems between Iran and other nations,” Iraj Masjedi told the state-run IRNA news agency in an interview in Baghdad.

“We would be happy if Iraq could be able to play any role in the direction of Iran’s closeness with nations that we have some challenges with.”

When asked whether Iraq’s mediation has borne fruit, he said the talks “have not reached any clear result and not met any remarkable progress.”

Iran and Saudi Arabia have long been regional rivals. Relations worsened considerably in 2016, when Riyadh removed its diplomats after protesters attacked its embassy in Tehran and consulate in Mashhad in retaliation for the kingdom’s executing the Shiite cleric Nimr al-Nimr. Those posts have remained closed ever since. At the time, Iraq offered itself as a possible mediator between the two countries.

Apart from Iraqi lobbying efforts, other key shifts in the wake of the Biden presidency paved the way for the talks.

Saudi Arabia is seeking to improve relations with the Biden administration which, unlike the Trump administration, has criticized the kingdom’s human rights record, particularly after the 2018 killing of dissident Saudi writer and Washington Post columnist Jamal Khashoggi.

The Saudis also want to test “whether Iranians have control over the Houthis, whether they are willing to exercise it,” said Randa Slim, director of the Conflict Resolution and Track II Dialogues Program at the Middle East Institute. “It’s a testing phase of wills, and interest.”

This change of guard was key in bringing Iranians to the table in Baghdad, Iraqi officials said.

“They have a new view, a new discourse, they want a stronger Iraq,” one Iraqi official said of the Intelligence Ministry officials. “The (Guard) calculated differently, they wanted the opposite, a weak Iraq was more beneficial to them.”

These were the details of the news Iran, Saudis hold talks in Baghdad, few expect quick results for this day. We hope that we have succeeded by giving you the full details and information. To follow all our news, you can subscribe to the alerts system or to one of our different systems to provide you with all that is new.