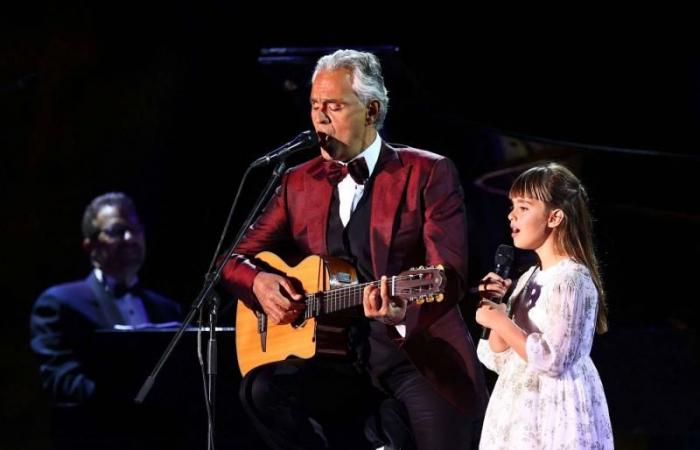 Italian tenor and opera singer Andrea Bocelli and his daughter Virginia sing during a concert at the Hegra World Heritage Site in the northwestern Saudi city of al-Ula on April 8, 2021. (AFP)

AL -ULA, Saudi Arabia – Against the backdrop of rock-cut tombs and sand-swept ruins, Italian tenor Andrea Bocelli regaled an audience on Thursday in an ancient Saudi desert city at the centre of the kingdom’s tourism push.

Bocelli performed alongside his family members at UNESCO World Heritage site Hegra in the kingdom’s Al-Ula governorate, a long-isolated area widely seen  as an open-air museum.

Saudi Arabia has allocated huge budgets to develop sites like it in an attempt to build a tourism industry from scratch, as part of efforts to diversify its oil-reliant economy.

Bocelli, who has performed in the kingdom at least twice before, was the “first artist in known history to stage a concert within the city walls of Hegra”, organisers of the televised event said.

The singer belted out Leonard Cohen’s “Hallelujah” in a duet with his young daughter Virginia to an audience that organisers said was limited to less than 300, due to the coronavirus pandemic.

The centuries-old Al-Ula, an area roughly the size of Belgium where Nabatean tombs and art are chiselled into caramel-hued rock, is seen as the centrepiece of Saudi tourism attractions.

The once reclusive kingdom began issuing tourist visas for the first time in 2019. It has launched a programme to develop tourism sites and upgrade its hospitality infrastructure.

Saudi Arabia has invited international musicians — from Janet Jackson to 50 Cent and Korean pop group BTS — for concerts that were unimaginable in the conservative country just four years ago, loosening decades-old restrictions on entertainment.

But the pandemic has put a brake on the country’s ambitious push to revamp its global image and draw tourists.

These were the details of the news Italian tenor Andrea Bocelli serenades ancient Saudi city for this day. We hope that we have succeeded by giving you the full details and information. To follow all our news, you can subscribe to the alerts system or to one of our different systems to provide you with all that is new.