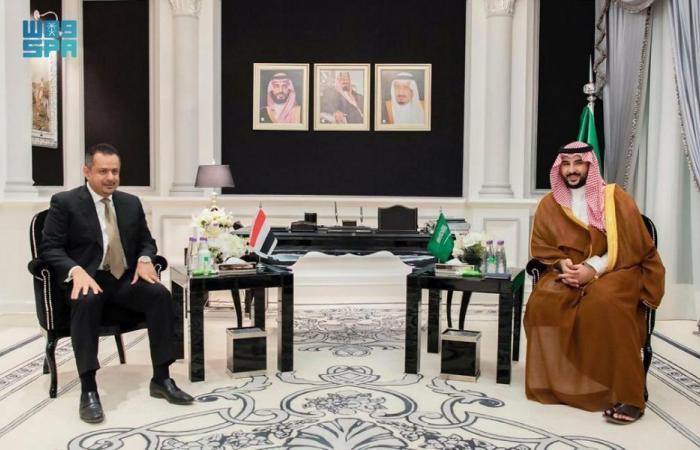 Thank you for reading the news about Saudi Arabia ‘committed to all efforts to end conflict,’ minister tells Yemen PM and now with the details

Jeddah - Yasmine El Tohamy - RIYADH: Saudi Arabia’s Deputy Defense Minister Prince Khalid bin Salman held talks with Yemeni Prime Minister Maeen Abdulmalik Saeed on Thursday to discuss relations.
“Met with the Yemeni prime minister to review our close cooperation, which is based on our common vision for peace and security, and discussed the Kingdom’s assistance to Yemen and its positive implications on the wellbeing and prosperity of the Yemeni people,” he said following the meeting.
During the meeting, the Prince Khalid told the Yemeni minister that the Kingdom is committed to supporting the Yemeni government in all fields.
He also said that his country supported “all efforts to end the conflict, implement a cease-fire, alleviate the humanitarian crisis, and reach a political resolution that guarantees peace and prosperity for the brotherly people of Yemen.”
The prime minister extended his thanks and appreciation to King Salman and the crown prince for the care and attention they give to Yemen, and for the development projects provided by the Kingdom through the Saudi Development and Reconstruction Program for Yemen. He also voiced appreciation for the recently announced Saudi grant to help power electric stations in Yemen.

The Yemeni minister briefed Prince Khalid on the political, military, security, economic and humanitarian situation in Yemen, and on the efforts made by the government since its formation and when it began work in the temporary capital, Aden, to deal with the existing challenges, especially the economic and security ones.
He called on the international community to assume its responsibilities and roles by exerting pressure on the Iran-backed Houthi militia to seize the Saudi peace initiative and not miss the opportunity to end the crisis.
Both sides agreed to continue to complete the implementation of the Riyadh Agreement, build on the positive aspects that have been achieved during the past period, and resolve any differences through dialogue.
Meanwhile, Mohammed bin Saeed Al-Jaber, the Kingdom’s ambassador to Yemen and supervisor of the Saudi Development and Reconstruction Program for Yemen, met with Norwegian ambassador Uvend Stocke, and a delegation from the international peace and reconciliation department at Norway’s Foreign Ministry.
During the meeting, they discussed Saudi efforts in various fields in Yemen, in addition to the Kingdom’s peace initiative to reach a comprehensive political solution that ends the crisis in the war-torn country.

These were the details of the news Saudi Arabia ‘committed to all efforts to end conflict,’ minister tells Yemen PM for this day. We hope that we have succeeded by giving you the full details and information. To follow all our news, you can subscribe to the alerts system or to one of our different systems to provide you with all that is new.