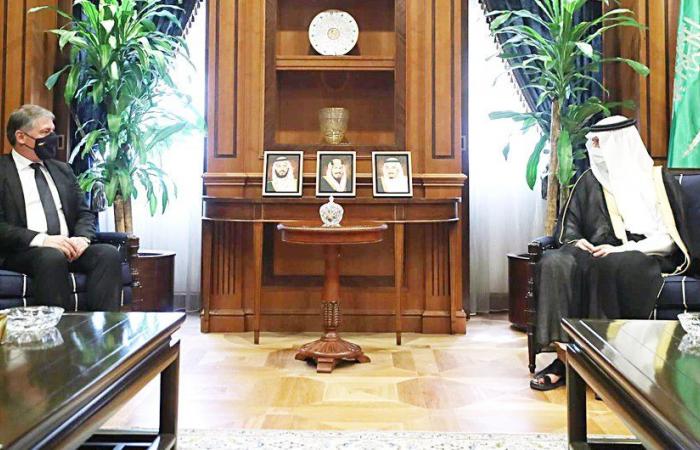 Thank you for reading the news about Saudi Arabia, Cyprus discuss enhance bilateral ties and now with the details

Jeddah - Yasmine El Tohamy - RIYADH: Almost 2,000 young Saudis have advanced their careers thanks to skills developed through an academy designed to diversify the Kingdom’s workforce.

The Misk Academy was set up in 2018 as a collaboration between Crown Prince Mohammed bin Salman’s Misk Foundation and General Assembly, a global education company.

The academy provides young Saudis the resources needed to compete in the global labour market. Using its expertise, General Assembly created digital and in person courses to assist students in learning new skills in the digital world.

The partnership has helped thousands of fresh graduates and seasoned professionals excel in their careers.

General Assembly said 1,993 Saudis had graduated from 74 courses so far. The program has expanded from Riyadh into Jeddah, Madinah and Khobar.

The aim has been to train Saudis with a modern curriculum to keep up with the technological advances in the digital age in line with the Kingdom’s extensive 2030 reform program.

The courses guide students in data analytics, data science, digital marketing, and the use of software engineering tools.

The General Assembly has instructors from many countries with backgrounds in tech giants like Google, Facebook, and Adobe.

“The program was full of new experiences for me,” said Afra Al-Zahrani, a user experience (UX) design graduate who took part in one of the programs. “Besides learning about UX, I got to deal with technology, which was intimidating for me, I got to also learn about myself.

“The instructors were great, and the classmates I just loved the environment and the community, I felt like I belonged right away.”

Al-Zahrani enrolled in the Misk program after struggling to find the perfect fit for her career from her sociology major.

She worked as a kindergarten teacher for more than four years but knew she had to continue her education to find a career path that she was passionate about.

“I started reading more about UX design and I couldn't believe how much it spoke to me, especially the research side, she said. “So I decided to apply, even though it was in another city and I didn’t plan how to move, it felt like the right thing to do, and I was so happy when I got accepted.”

Al-Zahrani was assigned a career coach who guided her in the program and advised her to apply to UXbert Labs, as a UX research executive in Riyadh and soon after she was hired.

“I needed to learn the foundations in structured methods and this helped me a lot, but it started with keeping an open mind and believing that I can learn something new,” she said, reflecting on her time on the course. “Perseverance is another key, controlling the emotional journey and quieting down the voice that tells you to give up, is what will get you across the finish line.”

Fahda Al-Arifi, a language translations graduate, wanted to shift her career into marketing and so completed courses in digital marketing and user experience design.

“General Assembly doesn’t only build the technical skills for me, but also the soft skills and how to be a professional,” she said. “I had an ongoing career coaching session, which helped me polish my career essential skills.”

As she was working full time, Al-Arifi decided to merge her daily work with a 10-week course to advance her skills. She decided to complete the user experience design course that gave her the tools to succeed in her current career as the vice operation officer for Nawafith leading a team and hiring General Assembly graduates just like herself.

After completing the digital marketing accelerator course Al-Arifi attended a conference led by a CEO of a law firm. While he was speaking she searched his name.

“The first thing I did was check his company’s digital image as he speaks,” she said. “I approached him straight after the speech to tell him about all the things that he needs to improve regarding their digital marketing and how I can help with it.”

The courses and guidance gave Al-Arifi the confidence to know exactly how to improve the law firm’s online presence and she was immediately hired by the company.

“General Assembly helped me build a strong network, she said. “I got three job offers before graduation through connections via GA community! Not to mention my former manager at the law firm connected me to a friend who was looking for a UX Designer.”

Almost 60 per cent of the Saudi General Assembly graduates that benefited from the programs were women.

Khaled Al-Rasheed, a math graduate who decided to launch his own E-commerce business, had a passion for data and decided to take the immersive data science course.

“I wanted to work with data. Whether as a data analyst, business analyst or any role that involves data handling,” he said. “Although becoming a data scientist was a goal of mine and it was the reason why I took the course, I was aware of the fact that it takes a lot of experience and knowledge in the field to be an actual data scientist.”

Al-Rasheed said he benefited immensely from the 12 week program. “Everyone at GA, really pushed me everyday and I always found support when I needed it, he said. “I also can’t forget about our instructional associate, Israa, who was there for me when I needed any clarifications or help.”

Al-Rasheed was able to graduate from the three-month data science course and went on to accept a position at a consulting company working alongside the economy ministry on its projects.

“In the course, we learned things like problem solving, how to acquire data, what data do we actually need,” he said. “These things can’t be taken for granted, because in the real world this is the building step to doing the actual work of data Science.”

These were the details of the news Saudi Arabia, Cyprus discuss enhance bilateral ties for this day. We hope that we have succeeded by giving you the full details and information. To follow all our news, you can subscribe to the alerts system or to one of our different systems to provide you with all that is new.