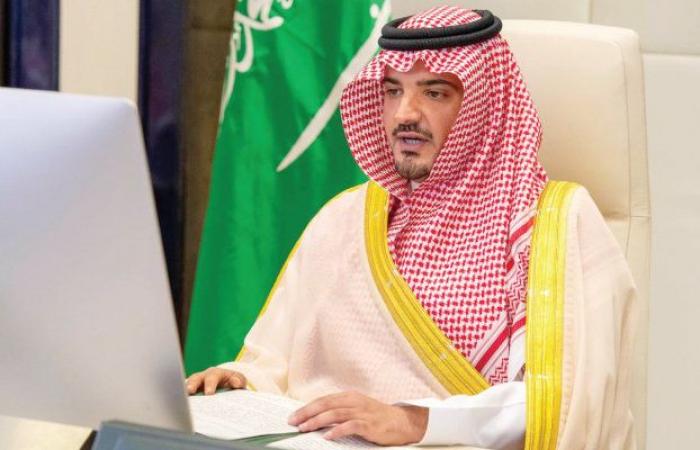 Prince Abdul Aziz gave a speech at the beginning of the meeting, which was held via video conferencing, and conveyed the greetings of King Salman and Crown Prince Mohammed bin Salman to the ministers.

“What has been achieved and what is being achieved by our security institutions in facing the global and local challenges and changes surrounding Arab security has contributed to strengthening the complementary relationship between the security services and citizens, thus raising their awareness and understanding of the role of the security services in their lives and stability and the importance of their cooperation to ensure the success of this role, which is part of the duties of the homeland and the responsibilities of the citizens,” he told the ministers. “We look forward to the growth of this role to enhance citizens’ relationship with the security services, who work to ensure their safety, security, and stability.”

Prince Abdul Aziz said that the complementary relationship between the security institutions in Arab countries, through the council, had contributed to the development of plans and strategies on areas such as crime prevention, drug control, traffic safety, financial control, civil protection, security awareness and the fight against terrorism.

These achievements were appreciated by both officials and the people, Prince Abdul Aziz added.

“I trust that, through joint cooperation, we will overcome every challenge that disturbs security and safety.”

Prince Abdul Aziz concluded by thanking the security sectors in all Arab countries for their efforts during the COVID-19 pandemic.

He also thanked the council’s secretary-general, the secretariat’s staff and its affiliated offices for their efforts in holding meetings and conferences despite the situation brought on by the pandemic.

These were the details of the news Council of Arab Interior Ministers holds 38th session for this day. We hope that we have succeeded by giving you the full details and information. To follow all our news, you can subscribe to the alerts system or to one of our different systems to provide you with all that is new.