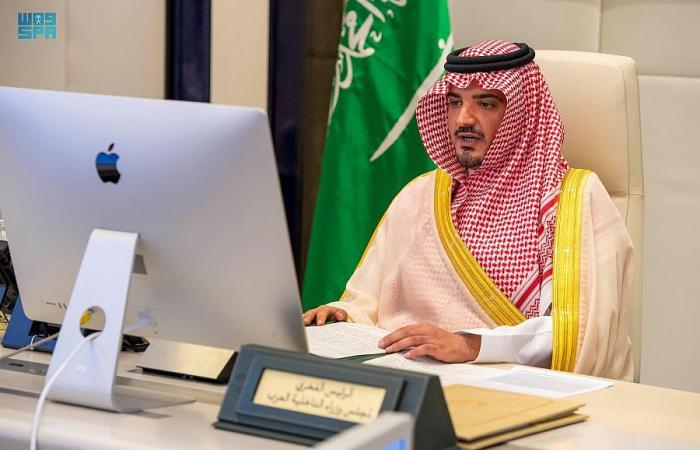 Jeddah - Yasmine El Tohamy - LONDON: Arab interior ministers approved the establishment of a group of experts to monitor, analyze and exchange information on terrorist threats, as tensions in the region continue to pose a security risk.
Interior Minister Prince Abdul Aziz bin Saud bin Naif led the Saudi Arabia delegation at the 38th session of the Council of Arab Interior Ministers, which concluded on Thursday.
During the virtual meeting, the ministers also approved a guiding mechanism to prevent terrorist fighters from moving into conflict areas and flashpoints in the Arab region. They agreed on new measures for dealing with their returnees and also established a permanent committee for criminal statistics within the council’s general secretariat.
Prince Abdul Aziz said despite the slowdown caused by the coronavirus (COVID-19) pandemic, the council has made several other gains, including strengthening cooperation with regional and international organizations to serve the security authorities in Arab countries.
“What is being achieved successfully by our security institutions in facing the global and local challenges and changes surrounding our Arab security, has contributed to strengthening the relationship between the security services and citizens,” he said.
“We are raising their levels of awareness and understanding of the role of the security services in their lives.”
Prince Abdul Aziz said the council looks forward to developing this role, which will enhance the relationship between citizens and the security services “that work for their safety, security and stability.”
He said that the relationship between the Arab security institutions and the Council of Arab Interior Ministers has contributed to building plans and strategies throughout its history, including crime prevention, drug control, counterterrorism, traffic safety, financial control, civil protection and security awareness.
“I am confident that through our joint cooperation, we are able to overcome every challenge that disturbs security and safety,” said Prince Abdul Aziz, who is also the honorary president of the council.
Ahmed Aboul Gheit, secretary-general of the Arab League, praised the efforts made by the council to strengthen security and combat crime in Arab countries.
The Egyptian was reappointed for a second term as secretary-general of the 22-member Arab League earlier this month. He also said the threat of terrorism still tops the challenges facing the region, adding that combating security threats is the highest priority of Arab national action.
Strengthening the victory achieved in combating Daesh requires doubling security vigilance, Aboul Gheit said, as continuous cooperation is needed between Arab agencies working to contain the group, “Before the situation escalates and the cost of confronting it increases.”
During the meeting, Arab interior ministers praised the “valuable” peace initiative proposed by Saudi Arabia to resolve the crisis in Yemen, and “urged all parties to accept it as a suitable way out of the crisis that fulfills the interests of all Yemeni people.”
The ministers also praised the outcomes of the AlULa Summit in January, which established a “new era of brotherly relations and cooperation for the Arabian Gulf States and the entire Arab world,” a statement on Saudi Press Agency said.
The council condemned and denounced the systematic and deliberate hostilities and sabotage acts carried out by the Houthi militia against Yemen and Saudi civilians and vital installations.
The ministers said that attempts to target oil installations affect the Kingdom and its capabilities, but also have an impact on the nucleus of the economy and global energy security. The council stands in full solidarity with Saudi Arabia in the face of these terrorist practices and attacks, and in all the measures it takes to preserve the security and safety of its people and its land.
They also “condemned Iran’s practices aimed at destabilizing security and stability in many Arab countries, and undermining the peaceful coexistence of the components of Arab societies.”
The ministers also affirmed their determination to continue combating terrorism, addressing its causes, mobilizing all efforts and capabilities to eradicate it, and strengthening Arab and international cooperation in this field.

These were the details of the news Arab ministers say expert group set up to monitor terrorism information for this day. We hope that we have succeeded by giving you the full details and information. To follow all our news, you can subscribe to the alerts system or to one of our different systems to provide you with all that is new.