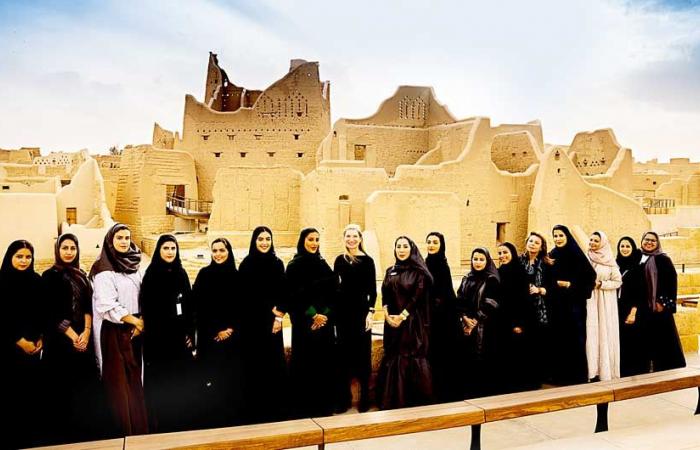 Jeddah - Yasmine El Tohamy - NEW YORK: As part of its celebrations for International Women’s Day, the Saudi mission to the UN in New York on Tuesday highlighted the Kingdom’s recent successes in its efforts to empower women.

Ambassador Abdallah Al-Mouallimi, the permanent Saudi representative to the UN, organized a high-level meeting during which he talked about some of the remarkable reforms and achievements that are ensuring women in Saudi Arabia play an increasingly important role in the decision-making processes in all aspects of daily life.

“Since launching Vision 2030 in 2016, the government of the Kingdom of Saudi Arabia has made qualitative legislative reforms that confirm the strong commitment (to) women’s full and effective participation (in) decision-making, (as) well as the elimination of violence, achieving gender equality and the empowerment of all Saudi women and girls in all fields in public and private sectors,” the Saudi mission said in a statement.

It also reiterated the three pillars of Vision 2030: a vibrant society, a thriving economy, and an ambitious nation in which Saudi women are invited to engage “more than ever” as active partners in society, government and economic decisions.

Organizers of the Saudi event looked for inspiration to the words of Crown Prince Mohammad bin Salman, chairman of the Council of Economic and Development Affairs, who said at the launch of Vision 2030: “We commit ourselves to provide world-class government services which effectively and efficiently meet the needs of our citizens. Together we will continue building a better country, fulfilling our dream of prosperity and unlocking the talent, potential, and dedication of our young men and women.”

In his opening remarks on Tuesday, Al-Mouallimi invoked the words of a hadith by the Prophet Muhammad which teaches that in Islam women are independent of and equal to men: “Assuredly, women are the twin halves of men.”

The ambassador said that the theme of International Women’s Day this year — Women in Leadership: Achieving an Equal Future — has therefore been a familiar idea to Muslims for more than 1400 years. This same, true model of Islam is being restored through Vision 2030, he added.

Al-Mouallimi said that since the launch of Vision 2030, the Saudi government has re-examined civil and labor laws and regulations, and through an ongoing process of reforms and initiatives it has set the stage for the empowerment of women in all spheres of public life, while advocating for gender equality and inclusivity at the highest levels of decision-making.

Al-Mouallimi told the participants that, just five years into the Vision 2030 process, the benefits to women in Saudi Arabia already exceed simple empowerment, with some already achieving success as young leaders.

The envoy added that women have also achieved leadership positions in the Kingdom’s Armed Forces.

Al-Mouallimi thanked the guests for being part of the celebration of “Saudi women flourishing beautifully and admirably.”

He also called on them to take note of the ongoing socioeconomic reforms in the Kingdom and its achievements in female empowerment during a time of “complex and global humanitarian and economic challenges” resulting from the COVID-19 pandemic.

In particular, he highlighted the W20 summit that took place during the Saudi presidency of the G20 last year, and the declaration of Riyadh as the capital of Arab Women for 2020, during the 39th session of Arab Women Committee under the auspices of the Arab League.

International Women’s Day, which is celebrated on March 8 each year, commemorates the social, economic, cultural and political achievements of women around the world.

These were the details of the news New initiatives helping Saudi women achieve their true potential for this day. We hope that we have succeeded by giving you the full details and information. To follow all our news, you can subscribe to the alerts system or to one of our different systems to provide you with all that is new.