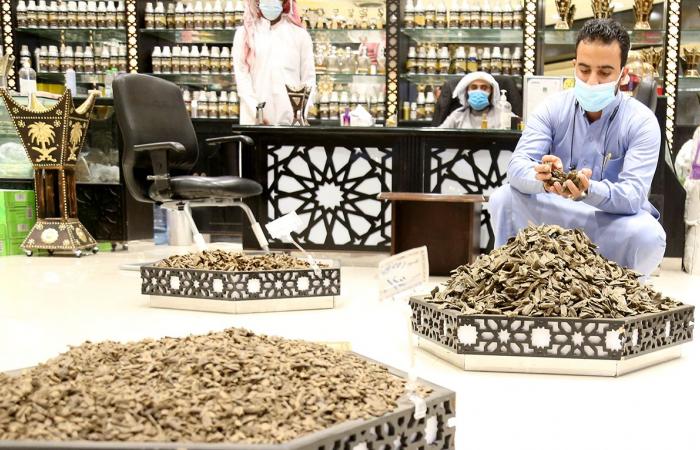 Thank you for reading the news about Forget the cost. Saudi love affair with oud makes perfect scents and now with the details

Jeddah - Yasmine El Tohamy - RIYADH: The traditional scent of oud enjoys an enduring popularity among Saudis, but high prices and uncertainty about quality are making many think twice before buying it.

Oud is extracted during winter from trees aged between 70 and 150 years and growing up to 20 meters in height.

These trees generally grow in tropical areas in Asia, especially on mountains and hillsides in India, Cambodia, Vietnam, Indonesia and Malaysia.

Gulf countries are the major importers of oud.

Wood oud emits an enjoyable fragrance when burned. Made of aromatic plants, wood oud has been increasingly mixed with aromatic oils in recent years. In Saudi Arabia, people often put wood oud in an electronic incense burner to deliver the desired fragrance.

Bader Al-Mansuri, a Saudi consumer, said that oud is an important tradition in Saudi society and is used for special social occasions as well as religious events, such as the Friday prayer.

Cambodian oud is the go-to option for most Saudis when shopping for the traditional fragrance, followed by the Morki and Kalamantan.

“My favorite is Cambodian oud, which I have been using for a long time,” Al-Mansuri told Arab News. “It’s part of our family tradition and culture, and my grandparents used it and passed it down to us. Oud has a positive moral impact, and is a sign of generosity and respect when you have visitors.”

Al-Mansuri that he only buys oud from well-known brands and companies.

“When the coronavirus disease (COVID-19) emerged, I bought oud off websites instead of going to incense shops,” he said, adding that it is difficult to judge the quality of oud bought online since the buyer cannot test the fragrance.

In addition to Cambodian oud, Al-Shouraihi also enjoys the Morki variety as well as other types with mixed substances.

“Vintage Cambodian oud, which is stored for longer periods, is the best. It is an ideal gift for friends or family members,” he said. “I love all perfumes that have oud fragrance or scent. The pandemic has affected oud purchases due to the way it is used and fears that it can transmit the virus.”

However, Ahmed Al-Mutairi believes the pandemic has had little impact on the oud industry.

He buys 100 gm of liquid oud and quarter a kilo of wood oud, paying about SR5,000 for his purchases every year.

“Some oud vendors on streets demand a high price, but they reduce the price to half after one bargains with them,” Al-Mutair told Arab News.

Hassan Al-Rashdi, a sales officer at Nada Oud Store, said that sales reach 5 kg  some days and 10 kg other days.

“Some people prefer different types of oud qualities,” he added, noting that a kilogram of oud can range between SR500-SR5,000, based on its quality and origin.

Al-Rashdi told Arab News that some Saudis prefer the Kalamantan variety. However, he believes Morki oud is the most popular incense for parties, official events and use in mosques.

Khalid Al-Johani, the owner of an online oud store, agrees that Morki oud is the most popular variety among his clients, followed by Kalamantan and Indian in terms of quality.

According to Al-Johani, Indian liquid oud is preferred by the elderly, though Thai oud is fast gaining in popularity.

“To judge the quality of oud, one should check the scent, weight, color and size,” he said.

“Most people buy oud based on the recommendations of others. But experts always check the quality of oud products inside out and ask about the substances inside and the structure.”

Some people are superstitious and believe that oud can cast out devils and genies, he said. However, people say they feel “relieved” and “in good mood” after they smell incense.

Most sales take place before and during Ramadan as well as Eid Al-Adha holidays, he added.

Zaid Al-Qaoud, chairman of Oud Albaraka, said that sales of oud have plummeted in the past year due to the absence of parties and weddings.

“Sales have fallen by 80 percent compared with the previous years,” he told Arab News. “Demand has also decreased because of coronavirus and many people have turned to social media websites to buy oud.”

Most oud stores can be found in central Riyadh, which has about 400 outlets, he added.

“Indonesian oud is very popular in the Gulf region and is the main source of many types of oud in the market that come with different scents.”

He added that old oud gives a better and more beautiful smell than newer products.

It can be difficult for regular consumers to distinguish a high-quality oud from an inferior product. “People have different tastes for oud, but most of them cannot tell original oud from a false one.”

Al-Qaoud, who has been in the business for 20 years, said that many Europeans in Saudi Arabia understand the quality of oud, recalling a regular French customer who said: “I have never smelled a sweet smell like the Taif roses and oud oil.”

Ayed Al-Falih, who is interested in artefacts, said incense burners are made of a type of wood found in Hail farms, with a price ranging between SR100 and SR500.

These were the details of the news Forget the cost. Saudi love affair with oud makes perfect scents for this day. We hope that we have succeeded by giving you the full details and information. To follow all our news, you can subscribe to the alerts system or to one of our different systems to provide you with all that is new.