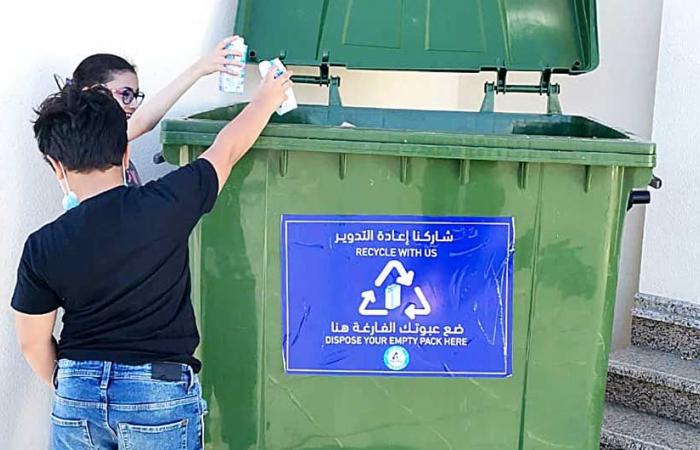 Jeddah - Yasmine El Tohamy - RIYADH: A new initiative by packaging giant Tetra Pak will raise awareness of the importance of recycling and pave the way for Saudi Arabia’s community to make better use of recyclable material.

The Kingdom has witnessed rapid industrialization, high population growth and fast urbanization in recent years, all of which has led to increased levels of pollution and waste.
Sustainability advocacy group EcoMENA estimates that Saudi Arabia generates more than 15 million tons of solid waste per year, while per capita waste generation is projected to be about 1.5 to 1.8 kilograms per person each day.
To that end, a new initiative launched in Jeddah looks to collect used carton packages and recycle them, raising awareness of recycling and encouraging Saudis to commit to sustainable consumption practices.
The initiative was launched in December by Tetra Pak, the world’s leading food processing and packaging solutions company, in partnership with the District Model Center of Muhammadiyah in Jeddah, and with Naqaa, a local provider of environmental sustainability solutions. The initiative also has the support of Al Rabie Saudi Foods Company and the Saudi Dairy and Food Company (SADAFCO).
Hussam Nasser, Tetra Pak sustainability manager for Arabia, told Arab News that the time was ripe for such an initiative to make its way to the Kingdom, especially given the growing focus on the environment.
“In general, a lot has changed in recent years. With Vision 2030, things are starting to shape up on the sustainability front. There’s a lot of work that needs to be done, to increase awareness and achieve the needed consciousness.
“On that front, this needs to be a collaborative work between several entities: Governments, nongovernmental organizations, private sector businesses, and of course, consumers,” he said.
The campaign aims to make recycling an appropriate and effective option for both individuals and businesses in the Kingdom. The Muhammadiyah Center, where the pilot has begun operating, is responsible for spreading awareness in neighborhoods about the initiative, its benefits and importance.

The campaign aims to make recycling an appropriate and effective option for both individuals and businesses in the Kingdom. The Muhammadiyah Center, where the pilot has begun operating, is responsible for spreading awareness in neighborhoods about the initiative, its benefits and importance.

“The pilot is scheduled to run for the next three months, but for our future plans, we hope to run the initiatives as a year-long thing, and to expand in other districts, not just in Jeddah, but across the Kingdom,” said Nasser.
Residents are encouraged to take part by collecting recyclable food and drink cartons and placing them in designated recycling bins, and by attending awareness sessions hosted by Tetra Pak and Naqaa.
Tetra Pak will collect the used carton packages and send them to be recycled in Riyadh, while Al Rabie and SADAFCO will contribute through a range of their products. Nasser also told Arab News that recycling bins would accept not only products from those two companies, but from competitors, too.
Tetra Pak has also worked on recycling on a larger scale. Since 2018, Nasser says that the company has signed agreements with government bodes concerned with sustainability, such as as the Saudi Ministry of Environment, Water, and Agriculture, the Saudi Investment Recycling Company and the National Waste Management Center.
On the private sector front, Nasser told Arab News that Tetra Pak has also teamed up with material providers to raise awareness of the benefits of recycling.
“Milk and juice boxes contain paper, plastic and aluminum, so we approached recyclers and signed partnership agreements with a local paper provider, Obeikan Paper Industries, one of the biggest and most advanced paper recyclers in the Kingdom, as well as Saudi Top Plastic, also a leading and very innovative plastic recycler, both located in Riyadh,” he said.
Since 2018, Nasser says that more than 6,000 tons of used beverage cartons have been collected and recycled by Tetra Pak partners.
“We consider this a very good start. We have been engaging with the government, being proactive and sharing our experience locally. And we intend to do more,” he said.
“Since everything shut down in March of last year due to the coronavirus pandemic, we didn’t manage to hit every target we wanted, but we have amazing things planned for this year.”

These were the details of the news Campaign launched to promote Saudi recycling for this day. We hope that we have succeeded by giving you the full details and information. To follow all our news, you can subscribe to the alerts system or to one of our different systems to provide you with all that is new.