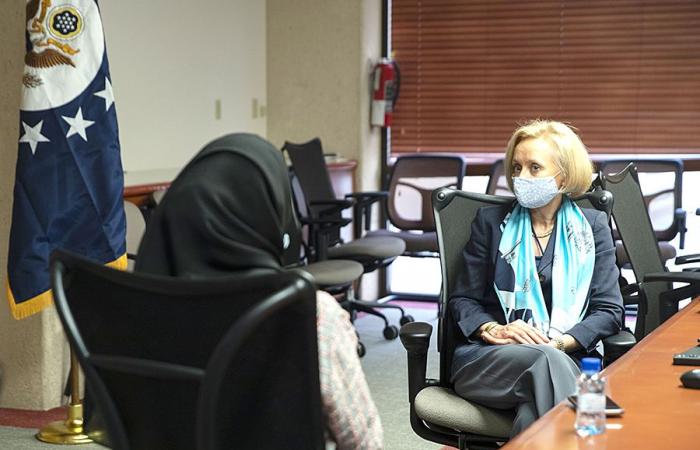 Thank you for reading the news about US commitment to Saudi Arabia remains ‘clear and unshakeable,’ says diplomat and now with the details

“Our commitment to Saudi Arabia just as we have over decades remains unshakeable and remains clear,” she told Arab News. “We are very clear-eyed about the threats that Saudi Arabia faces and not just Saudi Arabia, because obviously there are several countries here that are part of the GCC (Gulf Cooperation Council) that have been facing some of the deteriorating security situations.”

She made the remarks on the day that another ballistic missile was launched toward the Kingdom. More than 400 ballistic missiles have been launched by the Iran-backed Houthi militia toward Saudi Arabia in the past few years.

Strong was looking forward to working with the Saudi leadership to ensure that those “areas of instability were addressed, those threats were addressed, and we continue to work together for the prosperity and security of our citizens.”

More than 70,000 Americans live and work in Saudi Arabia, and one area she focused on a lot was the US nationals who called the Kingdom their home. “I want to make sure, just like your leadership wants to make sure, that our citizens are secure.”

She said that President Joe Biden had made it “very clear” that the US remained committed to the long-standing security partnership that it had enjoyed with Saudi Arabia for decades.

“It is really what’s key here and beyond our longstanding security ties and cooperation. We have been very closely consulting with Saudi Arabia on all of the developments that you have mentioned, our engagement in Yemen which we also hope will lead to a political settlement and stability in the south of Saudi Arabia.”

On Sunday Biden announced the appointment of a new special envoy for Yemen, Timothy Lenderking, who used to have Strong’s job in Riyadh.

Martina Strong made the remarks on the day that another ballistic missile was launched toward the Kingdom. More than 400 ballistic missiles have been launched by the Iran-backed Houthi militia toward Saudi Arabia in the past few years.

“It’s great to see him both be selected for this role, but also have him lead this renewed effort,” she said. “There is a lot of focus on this conflict, it was one of the areas that the president highlighted specifically in his (foreign policy) speech, and we certainly look forward with our Saudi partners to a very quick and speedy resolution to the conflict and hopefully, I would like to say in the months ahead so that we don’t have to look to the conflict continuing much longer.”

“In this regard, I always highlight our counterterrorism cooperation which again has been absolutely critical to both of our countries and to the region.”

She said that, in terms of economic cooperation, the pandemic had not dampened business between the two countries. “Despite the pandemic and despite the economic downturn in the Kingdom, in the US and around the world, the interest from US companies has really not diminished, quite the opposite.”

She explained that US companies were always looking to countries like the Kingdom that were reforming and trying to make the business environment more transparent and easier.

“They (US companies) have been coming to us asking what is happening in Saudi Arabia, how the economic picture is looking.”

She gave an example of the ongoing economic cooperation between the two countries, saying that a number of outreach events had been planned with Saudi Arabia’s ambassador to the US, Princess Reema bint Bandar.

“We had to transform those into virtual events,” said Strong. “There is a great deal of interest, and I think that the interest comes both from the positive experience that our companies have had here over the decades (of) our partnership but also, as I have said, from this new energy and the creative spirit that is encompassed in Vision 2030.”

Strong attended the Future Investment Initiative two weeks ago and described it as “a great opportunity” for her to see what was on the minds of all the leaders the event brought together.

“It illustrated some of the key areas where US companies are engaged in Saudi Arabia. I think this thing of rebirth and renewal is so critical now for all of us as we look ahead toward hopefully a near-term end to the pandemic.”

These were the details of the news US commitment to Saudi Arabia remains ‘clear and unshakeable,’ says diplomat for this day. We hope that we have succeeded by giving you the full details and information. To follow all our news, you can subscribe to the alerts system or to one of our different systems to provide you with all that is new.