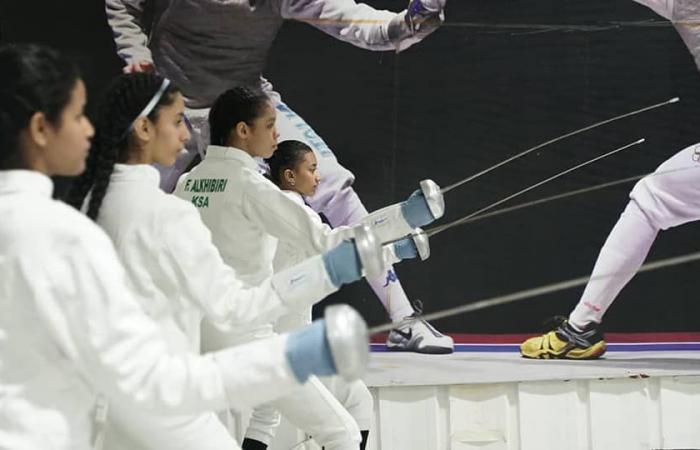 Thank you for reading the news about Saudi women find their calling in ‘elegant, exciting’ fencing and now with the details

Jeddah - Yasmine El Tohamy - JEDDAH: For some young Saudis, the virtues of one particular sport — fencing — have turned out to be nothing short of life-affirming.

In the elegant centuries-old sport, it seems she has, alongside many young Saudi female athletes, found her calling.

Inspired by her father’s athletic career, Al-Masri took up fencing three years ago, and has since claimed silver and gold medals in local and international championships.

“From a young age, I used to see pictures of my father and the medals that he achieved during his career,” Al-Masri told Arab News. “My family were my first supporters to tell me to follow the footsteps of my father and begin my journey.”

Since Saudi women first took part in the 2016 Olympics, the country has witnessed increasing female participation in sports. And fencing has turned out to be the most attractive.

“Until now, the number of Saudi female fencers exceeded 200, and work has been done this year to graduate the first five female referees in the history of Saudi fencing,” President of the Saudi Arabian Fencing Federation Ahmed Al-Sabban told Arab News.

Women’s participation in the sport began as recently as 2015 in the Eastern Province, Al-Sabban said, adding that female fencers from the region traveled to Bahrain to practice the sport. One of those fencers, Lubna Al-Omair, was chosen to take part in the 2016 Olympics.

“After that, about three women’s academies were established, starting from 2017 in Riyadh, Jeddah and Dammam,” he said. “We are working to have female fencing academies in all regions of the Kingdom.”

Fencing has been practiced in the Kingdom since the 1960s, Al-Sabban said, pointing to its origins at the Seven Palaces Schools in Jeddah. Many expatriates who moved to Dhahran after the discovery of oil in the Kingdom also played a role in introducing the sport to Saudis.

According to Al-Sabban, the sport first became popular in the Eastern Province and Tabuk, and then spread to all regions of the country. Today, the Saudi Fencing Federation operates academies in Jeddah, Riyadh, Taif, Madinah, Tabuk and the Eastern Province.

The hard work has paid off.

Al-Masri began fencing in April 2018 when she joined the Summer Olympic Fencing Program launched by the Saudi Fencing Federation.

“Fencing is an exciting, interesting sport,” said Al-Masri “It improves the player personality in terms of commitment and accuracy.”

She added that the sport “requires use of all the senses simultaneously, which improves one’s quick wit and observation.”

Coupled with the benefits of physical activity, fencing can boost general health, she said.

From the outset, Al-Masri was fascinated by the uniqueness of the sport in terms of equipment, outfits and techniques.

“Honestly, one of the most attractive things I found in this sport was the elegance of the fencing outfit, and how it is different from other sports,” she said. “I also find it comfortable because it covers almost the entire body.”

After winning a gold in the first Women’s Fencing Championship in the Kingdom, Al-Masri has gone on to represent Saudi Arabia internationally in Egypt, Tunisia, Kuwait, Jordan and the Philippines.

“I also learned that success does not start only from the first gold medal,” she added. “Instead, it begins with persistence and progress.”

Now Al-Masri has ambitions to participate in the Tokyo Olympics and has set her sights on becoming the first Saudi woman to win a gold medal. She also wants to achieve success in Asian championships and the Fencing World Cup.

“Fencing does not require specific physical criteria, therefore everyone can practice it at any age,” she said. “However, it is preferable to start young if you want to be a champion.”

Al-Sabban agreed, saying that there are no prerequisites for learning fencing. However, he said that there are optimal practices that will help fencers succeed, such as daily training, healthy nutrition, fitness and good sleep.

“The Saudi Fencing Federation continues to be the leader of women’s sports in the Kingdom, outperforming other sports federations,” he said.

“We hope that leadership will continue to support this, that fencing will be the first choice for all women in the Kingdom and that we continue to win gold medals in all tournaments.”

Al-Masri and her colleagues are no doubt dreaming of the same goals.

These were the details of the news Saudi women find their calling in ‘elegant, exciting’ fencing for this day. We hope that we have succeeded by giving you the full details and information. To follow all our news, you can subscribe to the alerts system or to one of our different systems to provide you with all that is new.