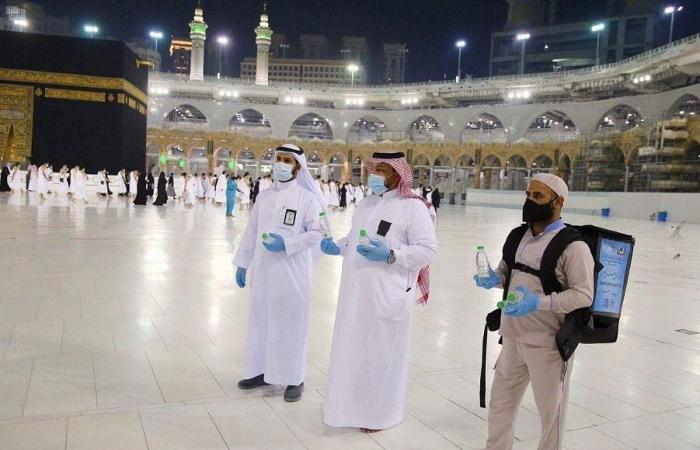 Thank you for reading the news about Grand Mosque in Makkah welcomed 7.5 million worshipers in four months and now with the details

Jeddah - Yasmine El Tohamy - RIYADH: Almost 7.5 million people performed Umrah and prayed at the Grand Mosque in Makkah during the past four months.
The General Presidency for the Affairs of the Two Holy Mosques said 1.9 million people performed Umrah and 5.5 million people prayed at the mosque between Oct. 4, when services that had been suspended because of the COVID-19 pandemic resumed, and Jan. 30.
Osama Al-Hujaili, director of the General Department for Crowds and Promotions at the presidency, said that the authority has “devoted all its energies to serving the pilgrims and providing them with a safe and healthy environment.”
He added that when Umrah pilgrimages returned, in phases, health precautions were in place and lanes were added so that pilgrims and worshipers could maintain the recommended safe social distancing. When the third phase began, on Nov. 1, Al-Hujaili said additional lanes were created near the Kaaba for use by the elderly and people with disabilities.
The first of these lanes is 155 meters long, can accommodate 45 wheelchairs and takes between 10 and 15 minutes to circumambulate. The second lane, the closest to the Kaaba, is 145 meters long, can accommodate 50 people, and is for use by elderly people who do not require a wheelchair.

These were the details of the news Grand Mosque in Makkah welcomed 7.5 million worshipers in four months for this day. We hope that we have succeeded by giving you the full details and information. To follow all our news, you can subscribe to the alerts system or to one of our different systems to provide you with all that is new.