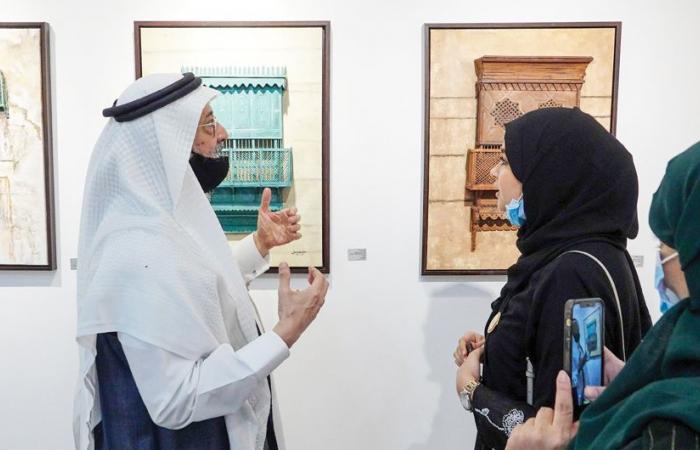 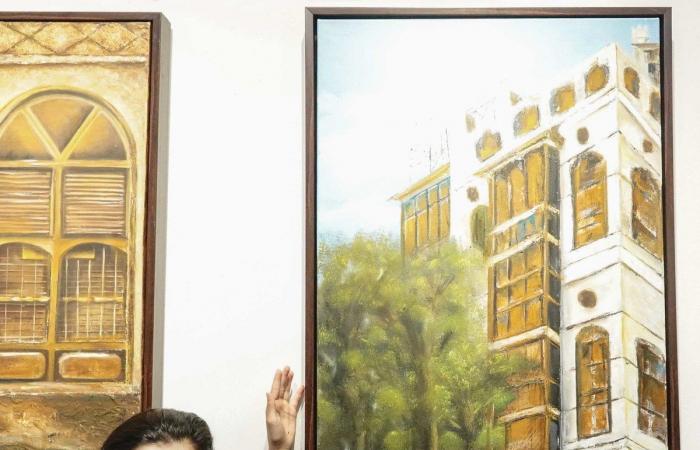 Jeddah - Yasmine El Tohamy - JEDDAH: In an ode to the rowshan, one of the most distinctive Hijazi architectural features, 43 Saudi female artists combined forces in an exhibition in Jeddah’s Fine Art Center. The rowshan is an elaborately patterned wooden window frame on the outside of the old buildings that served to air their interior.

In the display, titled “Rawasheen,” (plural for rowshan), Saudi artist and trainer Ibtihal Bajnaid gathered some of the country’s most prominent and up-and-coming artists under the auspices of the city of Jeddah.
The artists looked to capture the beauty of the rowshan, which was a prominent feature of old buildings in Makkah, Jeddah and Madinah. The use of the rawasheen has died out, and they are found only in a few offices, homes and old buildings in Hijaz today.

With 70 artworks on display, the aim was to preserve and even revive Jeddah’s creative architecture legacy.
Bajnaid has researched the art of the rowshan for years. Looking to revive the architectural feature, she dedicated her first exhibition to its beauty.
She told Arab News: “The rawasheen of Jeddah is only the start. We are planning to cover all historic architecture and traditional legacies of the Kingdom.”
The artworks of the gallery — some of them abstract art inspired by the essence of the old town today — were mostly inspired by photos of the rawasheen by famous photographers.
Najla Abdulshakour, an artist who is the media coordinator of the gallery, said the gallery works as “a documentation for the cultural heritage of Saudi Arabia and its ancient civilization, specifically the famous architectural art of historic Jeddah.”

The youngest participant was Rital Albigami, a nine-year-old with a powerful presence among her older peers in the gallery with her beautiful oil painting of one of Jeddah’s most prominent buildings, Naseef House.

The display that ran over the weekend brought together families, art enthusiasts and prominent artists. Hisham bin Jabi, a Saudi art veteran said: “I am really delighted to see this amount of enthusiasm toward art and heritage among the young artists. There is shade, light, and depth, I am truly amazed by the fine level of the artwork.”
Bajnaid was the driving force in training rising Saudi artists of different ages and her efforts proved very fruitful.
The youngest participant was Rital Albigami, a nine-year-old with a powerful presence among her older peers in the gallery with her beautiful oil painting of one of Jeddah’s most prominent buildings, Naseef House.
She expressed her excitement about art: “I love painting so much. This gallery is a big opportunity for me and I am so happy to be among the participants. My dream is to become the biggest and greatest artist in Saudi Arabia.”

The rawasheen of Jeddah is only the start. We are planning to cover all historic architecture and traditional legacies of the Kingdom.

Her mother said: “Rital is a very creative, talented kid and she’s a fast self-learner. She started to draw cartoon characters through tutorials on YouTube when she was seven. She then became interested in portrait and oil paintings, I tried to enrol her in portrait art courses, but she wasn’t accepted due to her age. Luckily, she met Ibtihal, who welcomed her in her classes and provided her with the support that led her to participate today in a real art gallery with adult artists for the first time even at this very young age.”
Afrah Ahmad, one of the participants from Riyadh, said: “I loved the subject so much, it has to do with the heritage of my country. My painting is built upon the one-point perspective, where you can see everything from one direction.”
Inspired by a 150-year-old building, Khadija Abu Al-Husain, from Makkah, tried to reflect the more vibrant tone of the building to pick up its decorative exterior, as many changes have been applied to the building over the years. Today the building has been turned into an antique art gallery and oriental music cafe.
“The original photo was in black and white so I used aquatic colors to reflect on the style of old Jeddah architecture,” she said.
Eighteen-year-old Jana Gandeel created models of the two most popular rawasheen in Jeddah using various materials such as the very thin Wawa wood, popsicle sticks, wooden dowels, and barbeque sticks, with some carving and other tools.
“I want my artwork and name to be known in the art industry, I want to know all the big artists and hopefully one day I will be one of them,” she said.

These were the details of the news Rawasheen exhibition preserves decorative architecture of Jeddah for this day. We hope that we have succeeded by giving you the full details and information. To follow all our news, you can subscribe to the alerts system or to one of our different systems to provide you with all that is new.