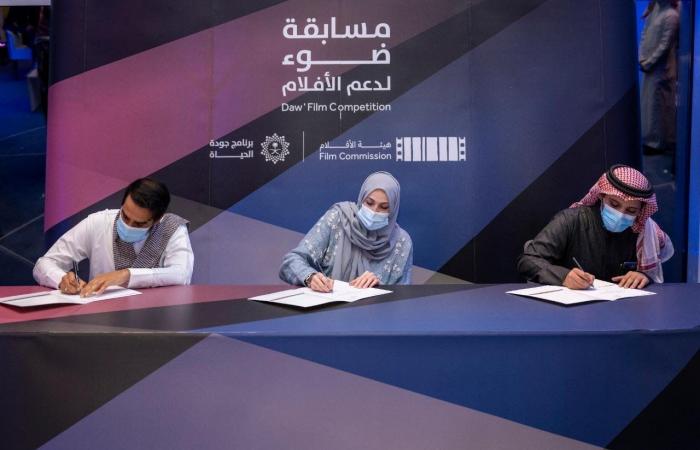 Jeddah - Yasmine El Tohamy - JEDDAH: The Saudi Film Commission signed an SR40 million ($10.7 million) deal on Wednesday for 28 film-related projects based on the winning entries to last year’s Daw competition. They include the development of scripts as well as production of short and feature-length films.

The commission announced in February last year the winners in the four categories of the competition. Eight entrants were rewarded in the category for completed scripts for feature films, 11 in the short films category, six in the script-development category, two in the completed long films category, and three in the student category.

Filmmaker Abdullah Al-Qahtani, CEO of the commission, thanked Prince Badr bin Abdullah bin Farhan, the minister of culture and chairman of the commission’s board of directors, for his support for cultural projects, including the Daw competition.

The commission launched the Daw competition in September 2019 to support Saudi cinema in line with the country’s Quality of Life Program, as part of the efforts to realize the Kingdom’s Vision 2030.

“Applications for Daw went through five stages of qualification, nomination and arbitration, and concluded with the announcement of the winners,” said Al-Qahtani. “But the competition does not end here, for the production phase for these 28 projects has begun, funded by nearly SR40 million.”

In a message to the next generation of Saudi filmmakers who will benefit from new-found support and empowerment, he said: “As a filmmaker, I envy you all. We have found a community, support and supporters who speak the same language” and share the same passion for film.

The commission launched the Daw competition in September 2019 to support Saudi cinema in line with the country’s Quality of Life Program, as part of the efforts to realize the Kingdom’s Vision 2030.

The aim of the contest was to help develop the emerging film industry in the Kingdom, empower Saudi talent, showcase Saudi content on regional and international platforms, and establish a sustainable model for film financing in the country.

These were the details of the news Saudi Film Commission launches 28 projects with Daw competition winners for this day. We hope that we have succeeded by giving you the full details and information. To follow all our news, you can subscribe to the alerts system or to one of our different systems to provide you with all that is new.