From Kufa to Makkah: Reliving the Zubaida Trail 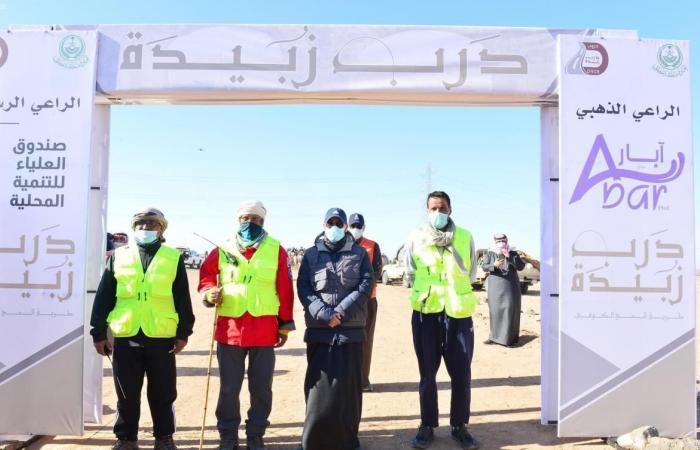 Thank you for reading the news about From Kufa to Makkah: Reliving the Zubaida Trail and now with the details

Jeddah - Yasmine El Tohamy - MAKKAH: Darb Zubaida, or the Zubaida Trail, is one of the most important humanitarian and social projects of Islamic civilization. It stretches from Kufa, in Iraq, to Makkah, covering 420 kilometers inside the Kingdom alone, and was once known as a route for pilgrims and traders.
The trail was named after Zubaydah bin Jafar, wife of Caliph Harun Al-Rashid, who contributed to its construction and revival for convoys and passersby.
Ten days ago, more than 100 men and women took the initiative of reviving the Zubaida Trail, participating in a camel convoy along the historical path.
Turki Al-Muhaifer, one of the initiators, said that the project seeks to revive the heritage of the trail by charting it as it would have been in Zubaydah’s era.
“The road has an important historical dimension, which tells of a rich culture lived by our ancestors,” he told Arab News.
Al-Muhaifer explained that the road is valued for its vital role in connecting Iraq and Saudi Arabia and allowing pilgrims a passageway to Makkah to perform Umrah.
He noted that participants in the initiative started on Jan. 4 and will continue until Jan. 19, after traveling the 420 kilometers.
“We passed through several historical stops and through monuments that are still standing, despite the great passage of time,” he said.
Each day, the team wakes up early before the morning prayer. Following prayer, they have breakfast, get ready and then start off on the journey, stopping every 10 kilometers to rest. This continues until they stop for the night to sleep and repeat the process the next morning.
Thirteen nationalities were supposed to be represented in the convoy. Due to the exceptional circumstances created by the pandemic, however, that number was limited.
So far, the group has completed half the distance, traversing a variety of terrains, including rocky territory and sand.
“The project provides good lessons for youth and history lovers,” Al-Muhaifer said.
Fureih Al-Shamri, another member of the team, said that the main goal of the initiative is not so much to explore the Zubaida Trail as it is to shed light on this civilizational achievement, give the deserved historical and civilizational recognition to the place and encourage walking.
Al-Shamri said the unique experience was sure to delight lovers of history, archaeology, photography and the environment.
“Our goal is to allow them to practice their hobby and protect this historical heritage,” he said.
Another of the initiative’s goals is to show the world the Islamic civilization’s strong identity.
“This trail shows only a small part of the Islamic civilization and its wonderful legacy,” he said. “We are not only cameleers or shepherds, as we are portrayed in some Western media, but we are people with a rich and enduring legacy.
We had a civilization before petrol, and the Zubaida Trail is a testament to this. This road passes through stations, each containing wells and ponds. There were small markets, some of which were buried hundreds of years later, while others still exist.”
Sarah Al-Modaymagh, a businesswoman participating in the initiative, said that this is one of the most important experiences of her life. She described being part of a motivated group and traveling the Zubaida Trail as an enriching experience, encouraging physical fitness and promoting the study of culture and history.
“This initiative tells the story of a great lady who dedicated her life and effort to humanitarian and cultural work and managed to create a trail from Kufa to Makkah, despite the circumstances and hardships, in order to secure trade and Hajj routes,” she said.
She described the Zubaida Trail as a piece of “forgotten heritage” with an untold story and praised the initiative for bringing attention to it.
“It renews hope and sheds light on the story of a woman whose actions and foresightedness will last forever,” she said.

These were the details of the news From Kufa to Makkah: Reliving the Zubaida Trail for this day. We hope that we have succeeded by giving you the full details and information. To follow all our news, you can subscribe to the alerts system or to one of our different systems to provide you with all that is new.

PREV The European Union expects a slow recovery in air traffic in...
NEXT Saudi ambassador to France presents credentials in Paris