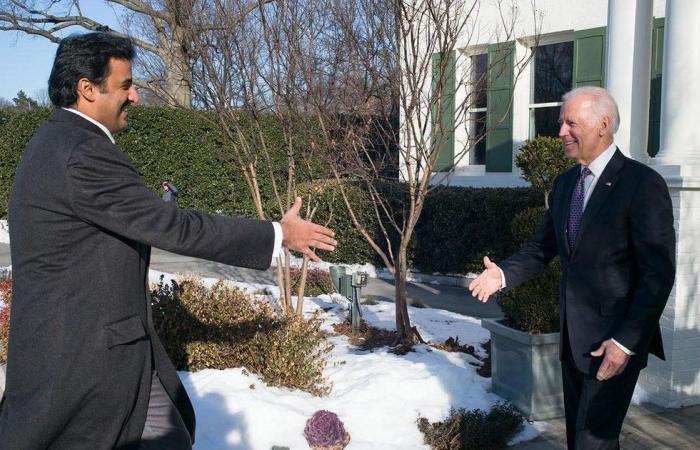 What did the Emir of Qatar say in his tweet to Biden?

He affirmed his aspiration to continue consolidating friendship between the two countries.

How many votes did Biden get against Trump?

290 votes out of 538 from the electoral college delegates so far.

Sheikh Tamim bin Hamad Al Thani said in a tweet in English on his Twitter account, that he is looking forward to joint work with President-elect Joe Biden and his deputy, Kamala Harris.

He affirmed his aspiration to further consolidate friendship between the two countries, wishing success to the people of the United States of America.

Sultan of Oman, Haitham bin Tariq, sent a cable of congratulations to the US President-elect, Joe Biden.

The Omani News Agency reported that Sultan Haitham expressed his “sincere congratulations to Biden for winning the confidence of the American people and for his election as president for the upcoming presidential term.”

For his part, the Emir of Kuwait, Sheikh Nawaf Al-Ahmad Al-Jaber Al-Sabah, sent a cable of congratulations to the US President-elect Joe Biden and his deputy, Kamala Harris.

The congratulatory telegrams included “praising the historical and established relations between Kuwait and the United States,” with permanent and common aspirations to strengthen these ties and develop joint cooperation between them in various fields.

Bin Rashid said, through his Twitter account, that “our relations for five decades have been solid and strategic with the United States,” wishing for this relationship more progress and solidarity with the new elected president.

The King of Bahrain, Hamad bin Isa Al Khalifa, congratulated the US President-elect Joe Biden and the Vice President-elect Kamla Harris, expressing the Kingdom of Bahrain’s pride in the strong and long-standing historical relations with the United States of America for more than a hundred and twenty years, and its keenness to continue constructive cooperation at all levels to enhance these Strategic relationships

Until the end of the day, Saturday, Mecca time, no position had been issued for the Kingdom of Saudi Arabia.

The Jordanian monarch congratulated King Abdullah II and congratulated Biden and Harris, saying he looked forward to working on “strengthening the historic and solid partnership in favor of our common goals of peace, stability and prosperity.”

As for Iraqi President Barham Salih, he stressed that Baghdad aspires to “achieve our common goals and promote peace and stability in the Middle East.”

Congratulations were poured in to the elected president, especially the leaders of the European continent; After the congratulations of the American Chancellor, the British Prime Minister and the French President, as well as the Secretary General of the North Atlantic Treaty Organization (NATO), as well as leaders from all over the world.

Earlier Saturday, US media announced that Joe Biden had won the race to the White House, at the expense of Republican President Donald Trump, who refused to admit defeat, as confirmed by his election campaign.

American channels said that Biden reached 290 in the electoral college after winning the swing states of Pennsylvania and Nevada.

Trump did not acknowledge his defeat to Biden, promising unspecified judicial appeals, seeking to change the outcome of the race to the White House.

He said in a statement: “Our campaign will begin to present our case in court to ensure full compliance with election laws and establish the real winner.”

These were the details of the news 5 Gulf states congratulate Biden … and Saudi Arabia is late for this day. We hope that we have succeeded by giving you the full details and information. To follow all our news, you can subscribe to the alerts system or to one of our different systems to provide you with all that is new.