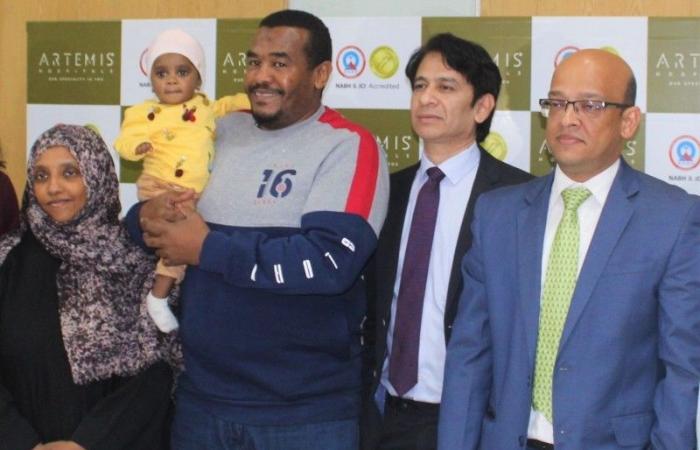 Hind Al Soulia - Riyadh - GURUGRAM — This New Year infused a new life for a one-year-old Saudi child. In a first reported case in the world, a team of proficient doctors at Artemis Hospital, located in Gurugram, India, carried out a rare and complex liver transplant on the baby involving the use of bovine jugular vein.

The vein was used to provide an inflow of blood to the newly transplanted liver as the baby was born with the absence of bile ducts and underdeveloped portal vein. The girl underwent a 14-hour long rare surgery called Monosegment (Segment 3) liver graft transplant wherein only 1 out of 8 portions of the liver was used to provide a new liver to the baby, according to a press release from the hospital.

Born as a third child to parents Ahmed and Sarah, the child had unusually prolonged and deep jaundice months after her birth. Doctors in Saudi Arabia diagnosed her with a rare disease called biliary atresia, which is found in 1:16000 live births.

The developments of bile ducts in such children are absent. The baby underwent biliary bypass surgery at a local hospital in Saudi Arabia before coming to India.

Due to the unsuccessful and unsatisfactory outcome of biliary bypass surgery, she was advised Liver Transplantation by the doctors in Saudi Arabia. However, considering her poor nutritional status and body weight (5.2kg) doctors in Saudi Arabia were reluctant and unwilling to perform such a complex liver transplant and she was referred to India.

Dr. Giriraj Bora, joint chief - Liver Transplant & Sr. Consultant - GI & HPB Surgery at Artemis Hospitals, said, “Transplant in babies weighing less than 6 kg is considered to be extremely complex and even a left lateral lobe from the donor (mother in her case) was big for such a small baby.

“Other major challenges were to get a blood supply for the new Liver as Portal Vein (main blood vessel to supply blood to the liver) was absent in the baby and we had to find a way to overcome this complex problem.”

Dr. Ramdip Rey, joint chief - Liver Transplant & Sr. Consultant - GI & HPB Surgery at Artemis Hospitals, said, “Her mother was the only available donor but big grafts can cause a blood vessel to thrombus (clotting of blood) soon after transplant and the entire graft is lost in many cases.”

He added, “As per the Liver Transplant Team and to the best of our knowledge, this is possibly the first of its kind surgery performed in Delhi NCR.”

Her mother Sarah, liver donor, is perfectly fine and healthy. She is happy seeing her baby doing well after surgery. She said, “We have no words to describe the wonderful experience and care we got at Artemis Hospital. We had lost all hope and during those difficult times we came to know about quality and cost-effective Liver Transplantation being done in India.”

In the past few years, India has emerged as a preferred destination for medical tourism due to cost-effectiveness, focus on advanced medical technology and availability of skilled medical professionals.

According to a report by Ernst and Young and FICCI, India’s medical tourism market is slated to the $9 billion mark by 2020. — SG

These were the details of the news One-year-old Saudi child gets new life in India for this day. We hope that we have succeeded by giving you the full details and information. To follow all our news, you can subscribe to the alerts system or to one of our different systems to provide you with all that is new.