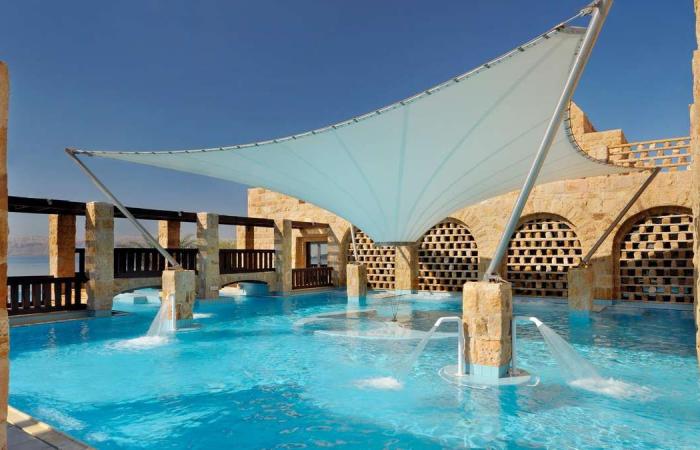 Thank you for your reading and interest in the news Five-star coronavirus quarantine: Jordan’s Dead Sea isolated describe lockdown and now with details

Hind Al Soulia - Riyadh - Jordanians quarantined in Dead Sea hotels have praised “nice and helpful” staff as they enter the second day of 14 days of isolation in the popular holiday resort.

Both citizens and foreigners arriving into Jordan by air and border crossings were taken to quarantine in Amman and the Dead Sea on Monday, regalrdless of being symptomatic or not.

Jordan is responding to the crisis as it announced its 35th case of coronavirus on Tuesday, nine of whom are foreign nationals.

Mohammad Yaghi, 24, is quarantined at the 265-room Dead Sea Spa Resort. He estimates 200 people are staying at the resort, 420 metres below sea level.

He was returning from taking an exam in the UAE via Bahrain when he was quarantined.

“It was like a normal situation till we received our baggage,” he told The National. “Then I saw a lot of people standing around. After this, some medical staff told us that we are going to quarantine.”

At the hotel, Mr Yaghi said he was assigned a room to himself, like others in hotels across the area.

The five-star Movenpick Resort and Spa Dead Sea usually costs upwards of Dh275 per room per night, but hundreds of Jordanians and others are staying for free - in quarantine.

The 6,000 square metre site has swimming pools, nine restaurants and a spa offering luxurious treatments using the famous Dead Sea salt. Unfortunately those in quarantine on site will not be allowed to enjoy the perks of being housed at one of the country’s most exclusive hotels, said Tasneem Irshaid, 21, who was taken into quarantine off her flight into Queen Alia airport from Chicago where she is studying.

“The hotel is filled with gendarmeries, so no one can leave.”

Other measures introduced by the kingdom include halting all non-essential medical procedures, a temporary shutdown of the private sector and most government institutions.

As it moved to isolate returnees in hotels in Amman and the Dead Sea, the government urged Jordanians in other nations to stay put instead of flying home.

So how to occupy your time while quarantined in a hotel room? Mr Yaghi jokes that his routine is unlikely to change. “Browsing the internet, watching TV… also, I have my laptop with me,” he said.

For Ms Irshaid, the quarantine will not be so relaxing. She is due to complete exams for her university course, which now have to be taken online.

“I’m kind of feeling stressed and worried because I have finals to do online,” she said on Tuesday.

Both Mr Yaghi and Ms Irshaid are trying hard to assure their families.

“My family were at first so worried and scared, but when they knew we’re going to a good and a clean place, not to hospitals, they felt better,” Ms Irshaid said

Mr Yaghi said he feels calm about the situation, but “somehow my family are worried”.

Although there are few staff at the hotels, they are providing well for those affected, both said.

“The staff are very nice and helpful. Food arrives to your room. You can call and ask for anything if you need anything,” Ms Irshaid said, adding that Ministry of Health representatives had visited repeatedly to check for symptoms of the virus.

It may be a lonely fortnight ahead, but Mr Yaghi agrees with his government’s course of action.

“Absolutely it is the best thing to do in this situation, especially that all cases are from outside.”

Both the Movenpick and Dead Sea Spa hotels did not respond to requests for comment.

These were the details of the news Five-star coronavirus quarantine: Jordan’s Dead Sea isolated describe lockdown for this day. We hope that we have succeeded by giving you the full details and information. To follow all our news, you can subscribe to the alerts system or to one of our different systems to provide you with all that is new.