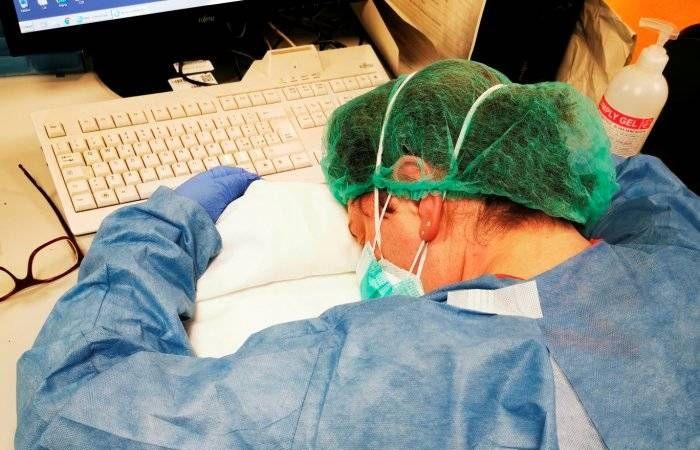 A worn-out nurse slumps over her keyboard in a widely shared image symbolic of the extreme fatigue that Italian healthcare workers are facing as they battle Europe's worst outbreak of the novel coronavirus pandemic.

The picture is of Elena Pagliarini, a nurse in the northern region of Lombardy which has been worst hit by the disease. Nationwide Italy has more than 1,400 deaths from the virus and 21,000 infections, with a quarter of the country's intensive care beds taken up by those with the illness.

In normal times Lombardy is the economic heart of Italy, equipped with one of the world's best health systems. But those who staff it - like Pagliarini - have been put under enormous strain.

"On one hand I was annoyed to see my photo everywhere, I was ashamed of showing my weakness," Pagliarini told the Corriere della Sera newspaper.

"But then I was happy because I got beautiful messages from people who empathised with my story," she said.

"I actually don't feel physically tired, I can work for 24 hours straight if it's necessary but I won't hide the fact that right now I'm anxious because I'm fighting an enemy that I don't know," she added.

She's just one of many healthcare workers who have expressed their concern at the toll that the outbreak is taking, on facilities and personnel alike.

"It's almost two weeks since I've seen my son or my family because I'm worried about infecting them," Daniele Macchini, a hospital doctor in the northern city of Bergamo, (also in Lombardy) wrote in a widely-shared Facebook post.

"I settle for some photos of my son which I look at through my tears, and a few video calls," he says.

Further south in Tuscany, the health system is also starting to feel the pressure.

A nurse in the Tuscan town of Grossetto, Alessia Bonari, posted an image on Instagram of her face bearing marks from a long day of wearing a surgical mask. "I'm worried because the mask might not be fitting right on my face, I might touch myself accidentally with dirty gloves, the glasses might not totally cover my eyes," she wrote in the caption.

She said that the protective gear staff had to wear meant that she couldn't drink or go to the toilet for six hours at a time. To add to the physical fatigue she said she and all her colleagues had been "psychologically tired" for weeks from the workload.

The San Giovanni Bosco hospital in the northern city of Turin this week put a mental health team in place to help its staff counter the stress of the current situation, above all for those working in emergency departments and in intensive care.

"All those who need it can come forward, we're there for everyone," Monica Agnesone, one of the 20 psychologists in the team, told the La Stampa newspaper. She explained that other doctors and hospital staff were suffering from the "fear of making mistakes, of being infected, of not being able to carry on in these conditions".

Six of them had to be admitted to hospital, with one needing intensive care.

Agnesone's strategies for coping with the stress will no doubt be increasingly called on in the weeks to come. She recommends "carving out moments where you can detach, re-centre yourself, lowering the level of tension by using breathing exercises and focusing on other things." Otherwise, she warns, "stress ends up wearing out your energy".

These were the details of the news Italian nurse's photo portrays struggle against coronavirus for this day. We hope that we have succeeded by giving you the full details and information. To follow all our news, you can subscribe to the alerts system or to one of our different systems to provide you with all that is new.