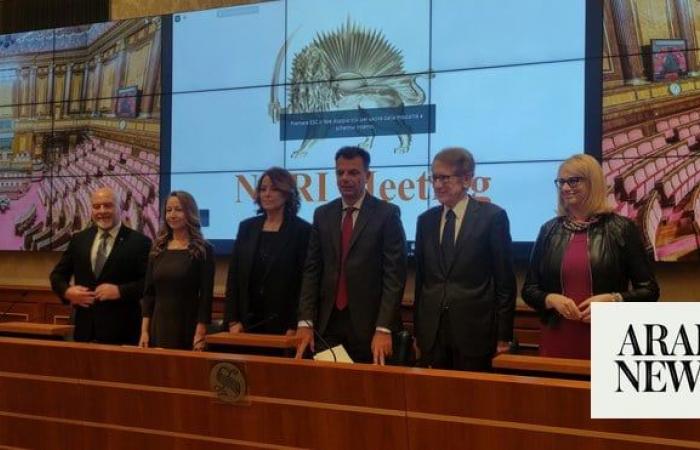 Thank you for reading the news about Italian lawmakers slam Iranian oppression against ‘freedom and democracy,’ calls on EU to act and now with the details

Jeddah - Yasmine El Tohamy - ROME: Italian legislators have strongly condemned repression in Iran and called on the EU to act against “a regime which denies freedom and democracy.”

Members of all political parties from the Chamber of Deputies, along with senators, assembled in the Senate for a conference attended remotely by Maryam Rajavi, president of the National Council of Resistance of Iran.

Sen. Marco Scurria said: “It is a duty of the Italian Parliament to express support to the Iranians who have been courageously demonstrating against the regime which has already killed nearly 700 people, mostly young.

“We do not ask for Iran to become a Western country; we only call for the right of the self-determination of Iranian people.

“They have the right to enjoy their freedom and rights in a state based on the rule of law.”

Scurria added that the Speaker of the Senate Ignazio La Russa “expressed his support for this initiative.”

Sen. Giulio Maria Terzi di Sant’Agata, who chairs the EU Affairs Parliamentary Committee in the Senate, said that the EU and its member states “cannot keep on turning their face away from the tragedy which has been going on in Iran for too long.”

He added: “The EU must act now in a concrete way so that freedom and democracy are guaranteed in Iran.

“We fully support the work of the opposition National Council of Resistance of Iran.

“Nobody must underestimate the regime’s capacity for violent repression.

“The regime that is responsible for infinite atrocities has killed 30,000 political prisoners. Its alliance with Moscow is even more nefarious.

“The revolt which has taken place following the killing of Mahsa Amini confirms how necessary the reaction of the people and the international community is against a regime which has activated a terrorist network in Europe, supported by its embassies.”

MPs Elisabetta Gardini and Luana Zanella expressed their support for Iranian women “who are paying the highest toll in the repression.”

Zanella added: “In Iran, women are excluded from human rights, and dozens of them are executed every year.

“As they are fighting a very difficult battle there, we have no other option but to be on their side.”

Rajavi said that in the past five years poverty in Iran “has increased threefold and so has the unemployment rate.”

She added: “Why does Europe appear unable to do anything to get rid of this regime?

“Apart from nice declarations, so far the European Union has had a condescending attitude toward the regime. The EU must take concrete action now.”

These were the details of the news Italian lawmakers slam Iranian oppression against ‘freedom and democracy,’ calls on EU to act for this day. We hope that we have succeeded by giving you the full details and information. To follow all our news, you can subscribe to the alerts system or to one of our different systems to provide you with all that is new.