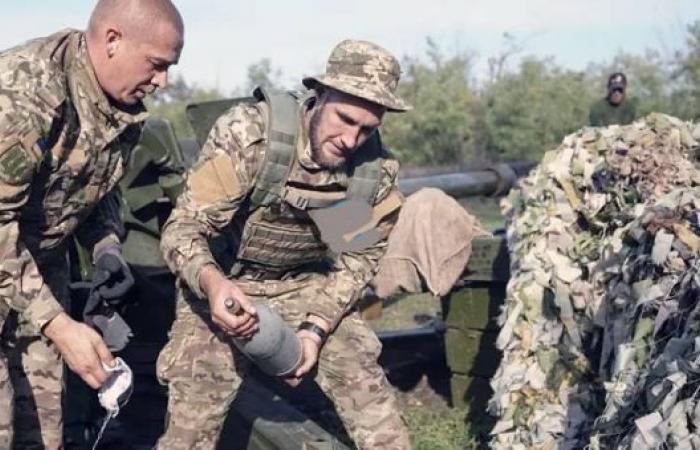 “The Ukrainian flag is already in Lyman,” Zelensky said in his nightly address. “Over the past week, there have been more Ukrainian flags in the Donbas. In a week there will be even more.”

Ukrainian soldiers announced the capture in a video recorded outside the council building in the town center and posted on social media.

“Dear Ukrainians: today the armed forces of Ukraine... liberated and took control of the settlement of Lyman, Donetsk region,” one of the soldiers said. At the end of the video, a group of soldiers cheer and throw Russian flags down from the building’s roof and raise a Ukrainian flag in their place.

Russia’s loss of the eastern town came just a day after Vladimir Putin proclaimed the Donetsk region in which it is situated, along with three other regions, as part of Russia.

The consequences are more than symbolic. Lyman’s role as a transport and logistics hub, is a new blow to the Kremlin as it seeks to escalate the war by illegally annexing four regions of Ukraine.

US Defense Secretary Lloyd Austin described the capture of Lyman as “absolutely... significant”.

“We’re very encouraged by what we’re seeing right now. Lyman sits astride the supply lines of the Russians. And they’ve used those routes to push men and material down to the south and to the west. And without those routes, it’ll be more difficult (for the Russians),” he said on Sunday.

In its daily assessment, the UK Defense Ministry described the Russian withdrawal from the town as a “significant political setback” given that it is located in “a region Russia supposedly aimed to ‘liberate’ and has attempted to illegally annex”.

Moscow claimed the withdrawal was a strategic move to more advantageous positions, and to have inflicted damage on Ukrainian forces in battling to hold Lyman.

But the British intelligence briefing said the town was “likely being defended by undermanned elements” of Russian military units as well as reservists. ”The force probably experienced heavy casualties as it withdrew along the only road out of the town still in Russian hands,” it said.

Russian forces pulled out after being encircled by Ukrainian forces. Taking the city paves the way for Ukrainian troops to potentially push farther into territory Russia has occupied.

Lyman is in the Donetsk region near the border with Luhansk, two regions that Russia annexed Friday after forcing the population to vote in referendums at gunpoint.

Moscow’s withdrawal from Lyman prompted immediate criticism from some Russian officials. The stinging defeat prompted the head of Russia’s Chechnya region, a close ally of President Putin, to call for the possible use of low-grade nuclear weapons.

“Further losses of territory in illegally occupied territories will almost certainly lead to an intensification of this public criticism and increase the pressure on senior commanders,” the British military briefing said.

In southern Ukraine, Krivyi Rih came under Russian attack by a drone that struck a school and destroyed two stories of it, said Valentyn Reznichenko, the governor of Ukraine’s Dnipropetrovsk region. A fire sparked by the drone attack was put out, he added.

Russia in recent weeks has begun using Iranian-made suicide drones to attack targets in Ukraine. The Ukrainian air force said it shot down five Iranian-made drones overnight in southern Ukraine, while two others made it through air defenses.

Meanwhile, Russian attacks also targeted the city of Zaporizhzhia on Sunday, according to Ukrainian authorities. It came amid ongoing concern for the fate of the head of the town’s nuclear power plant, Ihor Murashov, who was detained by Russian forces on Friday.

Ukraine’s military said it carried out a strike on a Russian ammunition depot at Chernihiv in the country’s south, and hitting other Russian command posts, ammunition depots and two S-300 anti-aircraft batteries.

The reports of military activity couldn’t be immediately verified. Ukrainian forces have retaken swaths of territory in a counteroffensive that started in September and has humiliated and angered Russia.

Moscow’s annexations followed hastily-staged referendums, condemned as “sham” votes, in which some people were forced to vote at gunpoint, according to Human Rights Watch.

Vladimir Putin frames the Ukrainian gains as a US-orchestrated effort to destroy Russia and this week heightened threats of nuclear force in some of his toughest, most anti-Western rhetoric to date. — Euronews

These were the details of the news Zelensky hails Lyman capture as US says Russian moves now ‘more difficult’ for this day. We hope that we have succeeded by giving you the full details and information. To follow all our news, you can subscribe to the alerts system or to one of our different systems to provide you with all that is new.