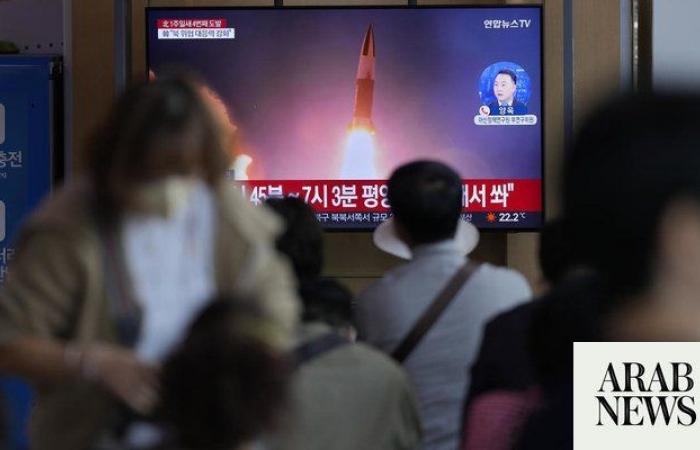 Jeddah - Yasmine El Tohamy - SEOUL: North Korea on Saturday test-fired two short-range ballistic missiles, its neighbors said, the fourth round this week of weapons launches that prompted quick, strong condemnation from its rivals.
In an unusually strong rebuke of North Korea’s weapons programs, South Korean President Yoon Suk Yeol said North Korea’s “obsession” with nuclear weapons is deepening the suffering of its own people, and warned of an “overwhelming response” from South Korean and US militaries should such weapons be used.
“North Korea hasn’t abandoned its obsession with nukes and missiles despite the persistent international objection in the past 30 years,” Yoon said during an Armed Forces Day ceremony at the military headquarters in central South Korea. “The development of nuclear weapons will plunge the lives of North Korean people in further pains.”
“If North Korea attempts to use nukes, it’ll face a resolute, overwhelming response by the South Korea-US alliance and our military,” Yoon said.
Yoon’s comments could enrage North Korean leader Kim Jong Un, who in July alleged that Yoon’s government was led by “confrontation maniacs” and “gangsters.” Kim has also rebuffed Yoon’s offers of massive assistance in return for denuclearization.
The North’s testing spree this week is seen as a response to recent naval drills between South Korea and the United States and their other training that involved Japan. North Korea views such military exercises by the allies as an invasion rehearsal and argues they reveal US and South Korean “double standards” because they brand the North’s weapons tests as provocation.
On Saturday, South Korea, Japanese and US militaries said they detected the two North Korean missile launches. South Korea said the liftoffs occurred from North Korea’s capital region.
According to South Korean and Japanese estimates, the missiles flew about 350-400 kilometers (220-250 miles) at a maximum altitude of 30-50 kilometers (20-30 miles) before they landed in the waters between the Korean Peninsula and Japan. Toshiro Ino, Japan’s vice defense minister, said the missiles showed “irregular” trajectory.
Some observers say the weapons’ reported low and “irregular” trajectory suggest they were likely nuclear-capable, highly maneuverable missiles modeled after Russia’s Iskander missile. They say North Korea has developed the Iskander-like weapon to defeat South Korean and US missile defenses and strike key targets in South Korea, including US military bases there.
The five other ballistic missiles fired by North Korea on three occasions this week show similar trajectories to the ones detected Saturday.
“The repeated ballistic missile firings by North Korea are a grave provocation that undermines peace and security on the Korean Peninsula and in the international community,” South Korea’s Joint Chiefs of Staff said in a statement.
Ino called the launches “absolutely impermissible,” adding that four rounds of missile testing by North Korea in a week is “unprecedented.”
The US Indo-Pacific Command said the launches highlight “the destabilizing impact” of North Korea’s unlawful weapons of mass destruction and ballistic missile programs.
On Friday, South Korea, the United States and Japan held their first trilateral anti-submarine drills in five years off the Korean Peninsula’s east coast. Earlier this week, South Korean and US warships conducted bilateral exercises in the area for four days. Both military drills this week involved the nuclear-powered aircraft carrier USS Ronald Reagan.
The North Korean missile tests this week also bookended US Vice President Kamala Harris’ visit Thursday to South Korea, where she reaffirmed the United States’ “ironclad” commitment to the security of its Asian allies.
Worries about North Korea’s nuclear program have grown since the North last month adopted a new law authorizing the preemptive use of nuclear weapons in certain situations, a move that shows its escalatory nuclear doctrine.
During his speech Saturday, Yoon said the North Korean law threatens South Korea’s national existence and that Seoul will expand military exercises with Washington and bolster South Korea’s own missile strike and surveillance capacities in response.
South Korean officials have typically avoided harsh rhetoric on North Korea to prevent an escalation of animosities. But Yoon’s Defense Ministry has recently warned North Korea would self-destruct if it uses its nuclear weapons
This year, North Korea has carried out a record number of missile tests in what experts call an attempt to expand its weapons arsenal amid stalled nuclear diplomacy with the United States. South Korean and US officials say North Korea has also completed preparations to conduct a nuclear test, which would be the seventh of its kind and the first in five years.
Experts say Kim Jong Un eventually wants to use the enlarged nuclear arsenal to pressure the United States and others accept his country as a legitimate nuclear state, a recognition he views as necessary to win the lifting of international sanctions and other concessions.
Multiple United Nations Security Council resolutions ban North Korea from testing ballistic missiles and nuclear devices. The country’s missile launches this year are seen as exploiting a divide at the UN council over Russia’s invasion of Ukraine and US-China competitions.
“North Korea’s frequent short-range missile tests may strain the isolated state’s resources. But because of deadlock on the UN Security Council, they are a low-cost way for the Kim regime to signal its displeasure with Washington and Seoul’s defense exercises while playing the domestic politics of countering an external threat,” said Leif-Eric Easley, a professor at Ewha University in Seoul.

These were the details of the news North Korea conducts fourth round of missile tests in 1 week for this day. We hope that we have succeeded by giving you the full details and information. To follow all our news, you can subscribe to the alerts system or to one of our different systems to provide you with all that is new.