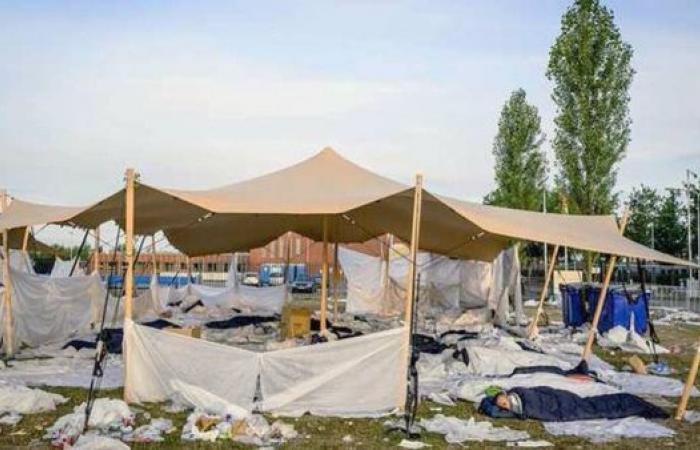 Hind Al Soulia - Riyadh - AMSTERDAM — The backlog of asylum applications in the Netherlands is almost as high as during the 2015 refugee crisis, according to new data.

Figures from Eurostat show that the Dutch immigration service has not yet responded to almost 30,000 asylum seekers.

A total of 29,460 asylum applications to the Immigration and Naturalization Service (IND) are pending, Eurostat noted.

This is only 180 applications fewer than the backlog in 2015, even though the number of new applications in 2022 is much less.

Martijn van der Linden, a spokesperson for the Dutch Council for Refugees, said they were “very concerned” about the impact of the backlog on refugees and asylum seekers.

“On paper, the Netherlands has a lightning-fast, careful, and efficient asylum policy that is admired by other European countries, but due to the lack of structural funding, the IND had to reduce costs and dismiss staff shortly after the refugee crisis in 2015,” van der Linden told Euronews.

“Therefore, in recent years asylum seekers had to wait up to almost two years before their asylum procedure even starts, whereas it should be a few weeks.”

“Since 2018, we have warned the Dutch government that waiting times are too long and that action needs to be taken. Unfortunately, not much has changed.”

The influx of asylum seekers in the Netherlands has resulted in unprecedented action from NGOs and humanitarian groups.

For the first time ever, Doctors Without Borders (MSF) sent a team of medical workers to the Netherlands after a build-up of migrants at the Ter Apel asylum center.

Around 700 asylum seekers were living in “increasingly inhumane and unacceptable,” sleeping outside the asylum center for days while awaiting registration. A three-month-old baby died at the overcrowded facility.

The two-week project by MSF provided shelter and “basic healthcare” to hundreds of people.

“Patients came from Syria, Iraq, Iran, Turkey, Somalia, Eritrea and West Africa. There were many people suffering from skin infections due to unhygienic living conditions, and neglected wounds that had been caused by walking for weeks on end,” MSF said in a press release.

“Others were in need of mental healthcare for symptoms including anxiety, panic attacks, depression and psychosis — conditions exacerbated by the uncertainty of the situation in Ter Apel and the lack of information about what was going to happen to them.”

“We call on the Dutch government to ensure that people seeking asylum in the Netherlands have access to medical care and humane reception conditions.”

The situation at Ter Apel has “significantly improved” and numbers outside the center have decreased but criticism is still mounting.

Dutch Prime Minister Mark Rutte has said he was “ashamed” of the situation, while King Willem-Alexander also discussed the matter during his annual speech last week.

One of the reasons for the refugee accommodation crisis is a nationwide housing shortage. Once asylum-seekers are granted refugee status, many are unable to find a place to live and have to stay in the refugee centers, which were intended only as temporary homes for people awaiting decisions on their asylum application.

Officials in Amsterdam recently approved a plan to temporarily accommodate at least 1,000 migrants on a moored cruise ship for at least six months.

However, within Rutte’s ruling People’s Party for Freedom and Democracy, several local politicians have called on the government to scrap a new asylum policy that forces municipalities to accept applicants.

Residents of the small eastern town of Albergen protested earlier this year against plans to house up to 300 migrants at a local hotel, arguing the town is too small to house hundreds of asylum seekers.

The Council of Europe’s human rights commissioner, Dunja Mijatović, said the current crisis “warrants a reconsideration of some more general and longer-term aspects of the system for asylum reception in the Netherlands.”

Noting the challenge the Netherlands faces, Mijatović, however, said she was concerned by the double standards applied in the treatment of asylum applicants from Ukraine compared to other countries.

“I am concerned about the stark differences in the treatment accorded to Ukrainians and to those of other nationalities, and join the call of other ... to prevent discriminatory treatment in access to reception and other services,” she said.

In response, Dutch Migration Minister Eric van der Burg said the government has already agreed on a package of measures and a budget of €730 million to build additional emergency shelters and additional housing for beneficiaries of international protection.

But NGOs say more “unorthodox” action is needed to end the “vicious circle” for asylum seekers. “The longer asylum seekers must wait for their procedure, the more reception places are needed,” van der Linden told Euronews.

“The IND’s backlog is reaching a new record while reception places and shelters are already full, hence creating a crisis on top of a crisis.”

“Recruiting, training, and onboarding IND staff takes time that we do not have. So, the backlog increases further, and you end up in a vicious circle.”

“We urge the Dutch Government to come up with unorthodox solutions and to implement a new funding system. Only then, the lives of refugees seeking protection in the Netherlands will be no longer on pause mode for an incredibly long time.” — Euronews

These were the details of the news Backlog for Dutch asylum applicants as high as during the 2015 migrant crisis for this day. We hope that we have succeeded by giving you the full details and information. To follow all our news, you can subscribe to the alerts system or to one of our different systems to provide you with all that is new.