UN and US have failed to deliver promised support for Syrian refugees, says expert 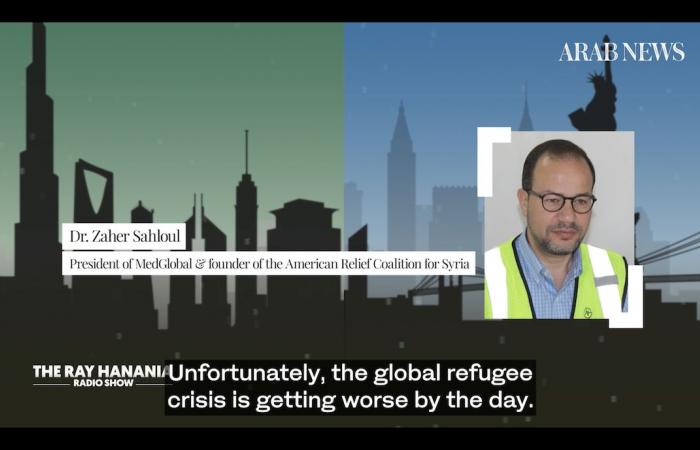 Thank you for reading the news about UN and US have failed to deliver promised support for Syrian refugees, says expert and now with the details

Jeddah - Yasmine El Tohamy - Promises by the UN and US to take action to help ease the worsening global refugee crisis have not be fulfilled, according to an expert playing a leading role in efforts to provide healthcare services to displaced people.

Zaher Sahloul, president of humanitarian organization MedGlobal and founder of the American Relief Coalition for Syria, told Arab News there are more than 26 million refugees in the world who were forced to leave their home nations, and about a quarter of them are Syrians who fled the 11-year civil war in their country.

He said UN Secretary-General Antonio Guterres has personally visited Ukrainian refugees since the conflict in their country began seven months ago but has never visited Syrian refugees during a conflict that has lasted more than a decade.

Meanwhile, he added, despite promises by President Joe Biden that his administration would help Syrian refugees, only a small number have actually made it to the US.

“We’ve seen the secretary-general of the UN recently in Kiev,” Sahloul said on Wednesday during an appearance on The Ray Hanania Radio Show. “He was pictured greeting the president of Ukraine.

“He never went to the Syrian border. He never met with (Syrian) refugees and made this big deal of this issue. It is his responsibility to respond to crises and he is not doing his job when it comes to Syria.

“Unfortunately, the global refugee crisis is getting worse by the day. Every day you have thousands of refugees fleeing oppression, fleeing the brutalities of war, fleeing climate change, floods and natural disasters and, of course, economic and governance deterioration in countries in Africa, the Middle East and Southeast Asia — and now in Europe, with the Russian invasion of Ukraine, where you suddenly, within a few months, have 6 million Ukrainian refugees.

“Right now there are about 26 (to) 29 million refugees in the world. Many of them came from countries that are going through wars, whether it is wars with other countries or civil wars, including in Syria. There are still 6.5 million Syrian refugees. One out of four refugees in the world are from Syria, still, after 11 years of crisis.”

When Biden took over in 2021 he promised to address the problem but this has not yet happened. Approval to enter the US has been granted to as many as 25,000 refugees, Sahloul said, but in many cases their arrival has been delayed by politics.

“Let’s just put things into perspective,” he said. “President Biden, after one week of war in Ukraine, he said we would be welcoming 100,000 Ukrainian refugees to the United States. It took five years for the Obama administration to welcome the first Syrian refugees.”

Sahloul said that Obama had “humanized” the perception of refugees and added: “The Trump administration had their refugee ban, or ‘Muslim ban’ or whatever you want to call it, where they prevented any resettlement of Syrian refugees and other refugees from the Middle East.

“And then the Biden administration, in spite of their pledges to rectify the policies of the Trump administration, they were slow, still are very slow, in resettling Syrian refugees. So far (the US has) settled 3,500 (refugees).”

During 11 years of war in Syria, 1 million refugees have been killed and 100,000 have “disappeared,” Sahloul said.

“When it comes to the Middle East, we treat them a different way than any other country in the world,” he added.

“It took 70 years of war with Israel to have 6.5 million Palestinian refugees. It took six years to have 6.5 million Syrian refugees. That will give you the scale of brutality between Arab regimes and Israel, which is considered the eternal enemy of everyone in the Middle East,” Sahloul said, by way of highlighting the sheer intensity of the Syrian conflict and its refugee crisis.

In total about 89 million people in the world are “displaced” after being forced to leave their homes, he added. Some are able to remain in their own countries while others become refugees in other nations.

“In this UN General Assembly week, there are some strong voices in support of the Syrian refugees in general, including the president of Turkey, Recep Tayyip Erdogan, although there are question marks about his politics and policies and things like that,” said Sahloul.

“One of the best speeches about refugees came from the emir of Qatar; he talked about the moral responsibility of the UN and the fact that we forgot about Syria and we forgot about the Syrian Refugees. It was a very inspiring speech.

“Unfortunately, the United Nations and other countries are not treating the root cause of the problems, they are treating the symptoms with Band-Aids.”

Hosted on the US Arab Radio Network and sponsored by Arab News, The Ray Hanania Radio Show is broadcast live every Wednesday at 5 p.m. EST in Detroit on WNZK AM 690 and Washington D.C. on WDMV AM 700, and rebroadcast in Chicago on Thursday at 12 noon CST on WNWI AM 1080.

These were the details of the news UN and US have failed to deliver promised support for Syrian refugees, says expert for this day. We hope that we have succeeded by giving you the full details and information. To follow all our news, you can subscribe to the alerts system or to one of our different systems to provide you with all that is new.