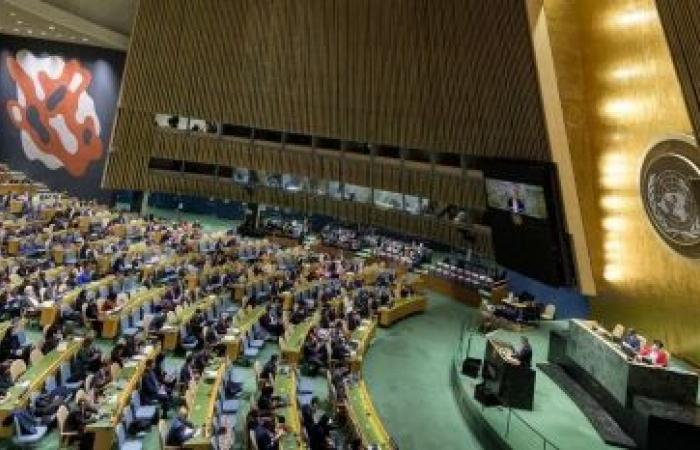 We show you our most important and recent visitors news details UNGA77: 5 key things to know about the upcoming General Assembly session in the following article

Hind Al Soulia - Riyadh - NEW YORK — With just a few weeks to go until the opening of the 77th session of the UN General Assembly, the UN diplomatic community, as well as residents of New York City, are bracing for the annual arrival of Heads of State and Government from around the world, after two years of disruption wrought by COVID-19. Many details are still to be confirmed, but here are five things to look out for between 12 and 27 September.

A new session means a new President of the General Assembly. The current PGA – as the UN acronym goes — Abdulla Shahid of the Maldives, will bow out, and Csaba Kőrösi of Hungary will take on the mantle for the next twelve months.

The handover will take place on Monday, 12 September; Shahid will close the 76th session of the GA in the morning, and the 77th session will be officially opened at 3pm the same day (site goes live at that time).

Kőrösi’s has held several roles within his country’s Ministry of Foreign Affairs, his most recent post being Director of Environmental Sustainability at the Office of the President of Hungary. He has been involved with the UN for several years, and the Presidency probably won’t involve too much of a learning curve: Kőrösi served as Vice-President of the General Assembly during the 67th session in 2011-2012.

As usual, international attention (as well as large numbers of police, and complaints about traffic jams from New York residents) will be centered around the High-Level Debate week, which begins on Tuesday 20 September.

However, the Transforming Education Summit, which takes place the week before at UN Headquarters – on Friday 16, Saturday 17 and Monday 19 September – is billed as a major event by the organization.

Friday is “Mobilization Day”, which will be youth-led and youth-organized, bringing young people’s concerns over their education to decision and policymakers, and will focus on mobilizing the global public, youth, teachers, civil society and others, to support the transformation of education across the world.

The second day is all about solutions, and is designed to be a platform for initiatives that will contribute to transforming education. The day is grouped around five themes (“Thematic Action Tracks”): inclusive, equitable, safe and healthy schools; learning and skills for life; work and sustainable development; teachers, teaching and the teaching profession; digital learning and transformation; and financing of education.

The third day, on Monday 19 September, is Leaders Day, capitalizing on the fact that so many Heads of State and Government will be descending on New York that week. Expect a host of National Statements of Commitment from these leaders.

The day will also feature the presentation of the Summit Youth Declaration and the Secretary-General’s Vision Statement for Transforming Education.

This year’s SDG Moment, which will take place between 08:30 and 10:00 on Monday 19 September, immediately before Leader’s Day of the Transforming Education Summit, will be an opportunity to refocus attention on the Sustainable Development Goals of the UN’s 2030 Agenda, a blueprint for a fairer future for people and the planet.

Speaking at the High-Level Political Forum – a key annual development forum – in July, Amina Mohammed, the Deputy Secretary-General, said that transitions in renewable energy, food systems and digital connectivity along with “investments in human capital, financing the opportunities”, are needed in order to turn multiple crises into opportunities.

Ms. Mohammed said that this year’s Moment will be “an opportunity to focus on these deep transitions, and on the work needed to get us back on track. It will also be an important milestone on the way to the 2023 SDG Summit.”

Last year’s Moment was notable for the involvement of Korean megastars BTS, who reflected on the huge disruption caused by the COVID-19 pandemic, and challenged the notion that they are part of a “lost COVID generation”.

On 18 December 1992, UN Member States adopted the Declaration on the Rights of Persons Belonging to National or Ethnic, Religious, and Linguistic Minorities (UN Declaration on Minority Rights for short), described by the UN as a key instrument to address the political and civil, economic, social, and cultural rights of persons belonging to minorities.

On Wednesday 21 September, in the Trusteeship Council Chamber, a High-Level Meeting will take place, as part of the year-long commemoration of the 30th anniversary of the Declaration.

Speaking in June, Paolo David, Head of UN Human Rights’ Indigenous Peoples and Minorities Section, said that, while the adoption of the Declaration brought hope three decades ago, this feeling was quickly lost due to the armed conflict in the former Yugoslavia. David noted that minorities continue to be instrumentalized in many conflicts, including in Ukraine, Ethiopia, Myanmar, South Sudan, Syria, and Yemen.

Today, minorities face unprecedented barriers and challenges, according to the UN. In many countries they deal with modern threats such as online hate speech and are being stripped of citizenship rights.

The event is billed as a chance to take stock of constraints and achievements, share examples of best practice, and set priorities for the future.

The General Debate will overlap with Global Goals Week which, despite the name, is actually a nine-day program of virtual and in-person events taking place between 16 and 25 September, involving more than 170 partners across civil society, business, academia, and the UN system, to accelerate action on the Sustainable Development Goals (SDGs).

There are too many events to list in full here, but they include NYC Climate Week, covering a wide range of climate-related challenges; the UN Private Sector Forum, run by UN Global Compact, which brings together business, the UN and civil society, to address global crises; and the launch of the 2002 Climate Action Project from Take Action Global, which brings classrooms from over 140 countries together, for a series of live interviews, school visits and social media takeovers.

There will be plenty of SDG Media Zone videos to watch during Global Goals Week, with dozens of interesting speakers, including content creators, influencers, activists and media partners, taking part in panel discussions that will highlight actions and solutions in support of the Sustainable Development Goals. — UN News

These were the details of the news UNGA77: 5 key things to know about the upcoming General Assembly session for this day. We hope that we have succeeded by giving you the full details and information. To follow all our news, you can subscribe to the alerts system or to one of our different systems to provide you with all that is new.