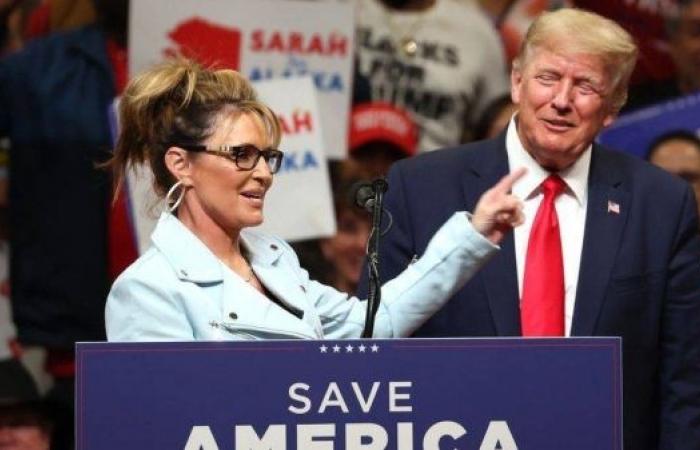 We show you our most important and recent visitors news details Alaska primary: Sarah Palin seeks comeback backed by Trump in the following article

Hind Al Soulia - Riyadh - WASHINGTON — Republican Sarah Palin is facing voters for the first time in more than a decade as she fights to be Alaska's congresswoman in Washington.

Ms Palin rose to prominence as a vice-presidential candidate in 2008. On Tuesday, voters will decide whether she joins the US House of Representatives.

She largely left the spotlight before the 2016 election of Donald Trump, who has become her key ally and supporter.

The former president has also backed a candidate in the Senate race.

Ms Palin served as vice-presidential running mate to Arizona Senator John McCain, who went on to become a vocal Republican critic of Trump.

Her brand of combative conservatism and anti-establishment appeal led many to consider her as the political precursor to Trump.

Ms Palin is running in a special election to be Alaska's only member of the House of Representatives, the lower chamber of the US Congress. She would replace Republican Don Young, who died in March after serving for 49 years.

She is up against Republican Nick Begich III and Democrat Mary Peltola, in Alaska's first test of its new ranked choice voting system — which was approved by voters in 2020.

The winner will only serve for five months — finishing Young's term — before facing their next race.

Begich is a tech entrepreneur and a member of a prominent Democratic family. According to the Anchorage Daily News, the family of Ms Palin's ex-husband - whom she divorced in 2020 after 31 years together - held a fundraiser last weekend for Begich.

Ms Peltola is a former state lawmaker and advocate for increased protections for Alaska's salmon populations. If she wins she will be the first Native Alaskan to represent the state in Washington.

It could take until the end of August for votes to be calculated in America's geographically largest state.

Alaska Republican Senator Lisa Murkowski, who in 2021 voted to convict Trump in his second impeachment trial, is facing opposition from Trump's selected candidate in the primary race to become the state's Republican candidate in November's general election.

Out of the seven Republican senators who voted to convict Trump, she is the only one who is facing re-election this year.

Trump has thrown his weight behind former Alaska commissioner of administration Kelly Tshibaka. He travelled to Alaska last month to hold a campaign rally for her and Ms Palin.

Wyoming Republican Congresswoman Liz Cheney, who is the senior-most Republican on the committee investigating Trump's role in the 6 January Capitol riot, is also facing a Trump-endorsed rival on Tuesday. — BBC

These were the details of the news Alaska primary: Sarah Palin seeks comeback backed by Trump for this day. We hope that we have succeeded by giving you the full details and information. To follow all our news, you can subscribe to the alerts system or to one of our different systems to provide you with all that is new.