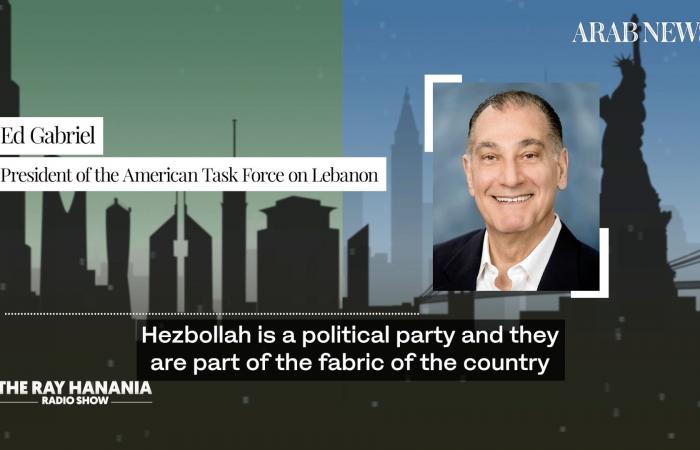 Thank you for reading the news about Lebanon on precipice of positive change: US task force head and now with the details

Jeddah - Yasmine El Tohamy - CHICAGO: Lebanon will be on the precipice of change if its people end government corruption, and Israelis and Palestinians reach a peace agreement, the head of the American Task Force on Lebanon said Wednesday.

Ambassador Edward M. Gabriel, president and CEO of the ATFL, who was recently appointed to the board of the US Institute of Peace, told Arab News there are many issues that need resolution to change regional dynamics and significantly reduce tensions. But that positive change is possible.

Gabriel, who just returned from an ATFL mission to Lebanon, said that if the Israelis and Palestinians find peace, Hezbollah would lay down its arms and become more of a political party rather than remain as one of the toughest militias to successfully stand up to Israel’s regional military presence.

“Hezbollah is a political party and they are part of the fabric of the country whether some people like it or not. The question is, they need to put down their arms and make sure they operate as a political entity in Lebanon and not continue their terrorism across the region,” Gabriel explained, saying that if this happens the group could be a positive force in the country.

“Hezbollah has said that when there is peace between Israel and the Palestinians, there is no need for them to have arms. I met with the Shia mufti recently and he actually reiterated that belief. And I asked him, at what point do you see them putting down their arms, and he said exactly those words you seem to indicate.”

During an appearance on The Ray Hanania Show, Gabriel said there are other factors at play besides Hezbollah’s military strength and engagement in terrorism. They include Lebanon resolving its maritime disputes with Israel and ending the corruption of the Lebanese government in order to qualify for financial support from the International Monetary Fund.

“One thing has come up is a negotiation between Lebanon and Israel, two enemies that are trying to settle their maritime border dispute. We were encouraged that they were moving in the right direction there, and if they do it will send a great new signal that Lebanon can work with some of the tough characters in the region and find simple solutions,” Gabriel said.

Resolving the maritime issues between Israel and Lebanon can open access to huge pockets of oil and gas that lie underneath the Mediterranean Sea, he said.

“What this comes down to is a parliament that will tell the corrupt leaders enough is enough, you are out. We are going to vote for reforms and change and we are going to implement those through a good governance structure to make change. Those are two issues causing the problem today. The IMF program, the International Monetary Fund program, is a possible solution out if they react to it and pass the needed legislation in the next two months just before a presidential election. The parliament will have something to say about that. Will they elect a president that is reform oriented or will the same old guys elect the same old guys.”

Gabriel said the election results from May 2022 which weakened Hezbollah’s hold on parliament, offers a path to achieving greater reforms and rebuilding the nation’s shattered economy.

“Recent statistics put Lebanon in the bottom four of the worst (performing on the) economic (front of) countries in the world. Just a couple of decades ago — a decade ago — it was in the upper third of countries on the income scale. The World Bank says it is one of the worst economic disasters since 1850, possibly one of the worst three disasters. We have a lot to be concerned about,” Gabriel said.

“We met with the top leadership of the country, with a tough message. And that was you are in charge of a country that right now is going off the cliff. It is going to be a beggar state by next year and you will be responsible for this unless you can do something in the coming months to stave off the impending disaster.”

But he said that the reformers must find a way to come together in strength to bring change in the November presidential elections.

“Reform candidates, the opposition candidates, the change candidates took away the majority, away from Hezbollah and its allies. So there seems to be a movement there by a progressive group of parliamentarians that want to make change. Now, that is a long way to go but these phenomenal people who care about their country are doing their best under the circumstances. There is regional pressure on Lebanon,” Gabriel said, noting increased tensions and rhetoric between Israel and Hezbollah recently.

“But that’s making an excuse. Quite frankly, the reason why Lebanon is what it is, is because of corruption. There is massive amount of corruption in the country and it really has to come to a halt if there is ever to be any progress. The International Monetary Fund is come in with a proposal accepted by the government so far. But the government has to implement a number of reforms that will reduce corruption and address the needs of the people, so we will see how that happens.”

But Israel has to realize that it has major decisions to make regarding regional peace and find another alternative to violence against Palestinians, he said.

“And right now the one-state solution would have the Palestinian people over 50 percent of the population. So, it really is in Israel’s best interests to think how they are operating in the Palestinian arena. Having said that, terrorism by Hamas doesn’t help the situation. Right now, they need quiet in the region and now that Israel has a partner to talk to. Both of them have to come to grips with this for a win-win solution.”

Gabriel said he believes that despite some challenges, President Joe Biden offers the best route toward building up the Middle East, noting the US leader has spent much time addressing the region.

These were the details of the news Lebanon on precipice of positive change: US task force head for this day. We hope that we have succeeded by giving you the full details and information. To follow all our news, you can subscribe to the alerts system or to one of our different systems to provide you with all that is new.