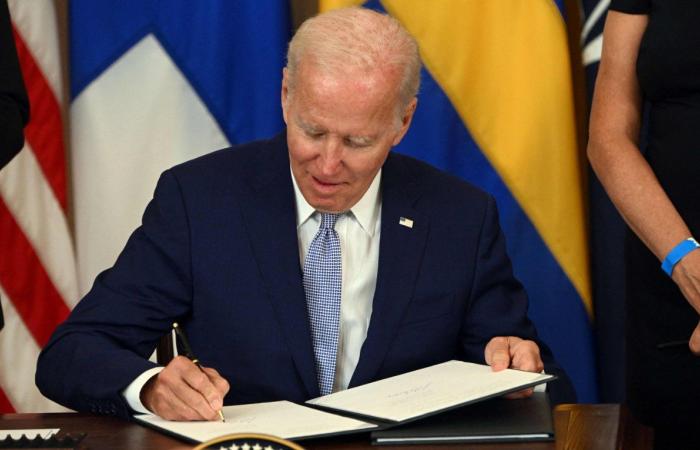 Thank you for reading the news about Biden formalizes US support for Finland, Sweden joining NATO and now with the details

ISLAMABAD: Pakistan’s electronic media regulator has issued a show-cause notice to a major private news channel, ARY News, for airing “hateful and seditious” content that the authority said amounted to inciting revolt within the armed forces, a copy of the document shows.

The show-cause notice released late on Monday came hours after officials at ARY News, and an association of internet service providers, said the channel had been taken off air by the Pakistan Electronic Media Regulatory Authority shortly after the channel aired a segment considered critical of the government of Prime Minister Shehbaz Sharif as well as the top command of the Pakistan army.

On Monday, the channel aired a segment in which two hosts and chief of staff to Khan, Shahbaz Gill, alleged that Sharif’s ruling Pakistan Muslim League Nawaz party had activated a “strategic media cell” to malign the PTI and its chairman, and build a public narrative that the party was against Pakistan’s all-powerful army. The outlet had previously also made the accusations in June.

In the segment, Gill advised army officers not to follow orders issued by the top command if they were “against the sentiments of the masses.”

“A beeper of Shahbaz Gill of Pakistan Tehreek-e-Insaf was included who uttered highly hateful and seditious comments which tantamount to incite rank and file of armed forces toward revolt,” PEMRA said in the notice issued to the channel.

“Airing of such content on your news channel shows either weak editorial control on the content or the licensee is intentionally indulged in providing its platform to such individual who intent to spread malice and hatred against the state institutions for their vested interests,” the notice read, saying this was against the country’s constitution.

The notice said the channel had also maligned the government by “egregiously, baselessly and categorically” claiming that it was running a malicious campaign over the crash of an army aviation helicopter last week.

The regulator directed the CEO of the channel to show cause in writing within three days explaining why legal action should not be initiated against the outlet for violating the law and the constitution.

Earlier on Monday evening, ARY News officials said that the channel had been taken off air in a number of cities.

“Just cause we reported a true story #ARYNews gets shut down,” CEO Salman Iqbal said in a Twitter post.

ARY News was reported to still be off air in several cities of Pakistan on Tuesday.

The Internet Service Providers Association of Pakistan confirmed to Arab News that the channel’s transmission had been suspended across Pakistan, saying it was done on the instructions of PEMRA.

“We have received verbal instructions from PEMRA about an hour ago to off air ARY News,” Wahaj Siraj, convener ISPAK and co-founder of Nayatel, a major internet service provider, told Arab News. “No reason is given to us to off air the channel, and this is being done almost across Pakistan now.

Information Minister Marriyum Aurangzeb did not respond to calls and text messages seeking comment on whether the government was behind the blockade of ARY.

The development comes in the wake of an online smear campaign against the military and its officers after any army aviation helicopter carrying a senior commander and five others crashed on a mountain during a flood relief operation last Monday, killing all on board.

Following the incident, a social media campaign targeted the victims and included hashtags against the military.

The prime minister called the campaign “horrifying” and said it showed that the minds of young Pakistanis were being poisoned.

The army’s media wing has also condemned the “regretful” social media trends, saying they had caused anguish among families of the victims and sought to tarnish the army’s reputation.

On Sunday, the Federal Investigation Agency said that it was setting up a joint inquiry into the campaign.

Members of the PTI have alleged that Twitter trends and anti-army posts are being pushed by the ruling PMLN, a claim the party denies.

The army has not yet commented on ARY being taken off air.

These were the details of the news Biden formalizes US support for Finland, Sweden joining NATO for this day. We hope that we have succeeded by giving you the full details and information. To follow all our news, you can subscribe to the alerts system or to one of our different systems to provide you with all that is new.