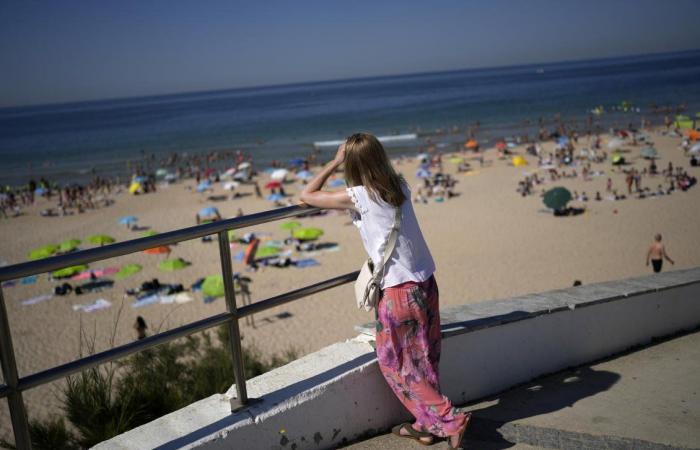 Thank you for reading the news about Portugal sets new July heat record, worsening severe drought and now with the details

Jeddah - Yasmine El Tohamy - DHAKA: When Abdul Alim moved to Dhaka five years ago, after floodwaters swept away his farmland in southern Bangladesh, he hoped to find a livelihood, like tens of thousands of others who arrive in the city every month, displaced by the impacts of climate change.

Alim, a 68-year-old farmer, arrived in Dhaka with his family from Bhola, an island in the estuary of the Meghna River, just a few kilometers from the Bay of Bengal. It was the seventh time he had to abandon his home due to river erosion, which this time destroyed everything he owned.

“We’ve lost all ancestral lands,” Alim told Arab News in the Karail slum area, where he now lives with his wife and youngest son, working as a rickshaw driver. “I don’t have any permanent address now.”

Alim’s two other sons have found work at garment factories outside Dhaka, and he only gets to meet them a few times a year.

“My family fell apart due to river erosion,” he said. “All our hopes and dreams have gone under the waters of the Meghna River.”

Mansurul Haider, who arrived in Dhaka four years ago from Satkhira, a southwestern coastal district, did not lose his land but is no longer able to cultivate it after tidal waters poisoned the soil.

Like farming, finding drinking water also became difficult in his village as the rising sea level has been compounded by heatwaves that have lately intensified across the whole Indian subcontinent.

“People sometimes used to walk several kilometers to refill their drinking water pots from the reserve ponds, a dedicated drinking water source. But things became worse during summer when these little ponds are dried up,” he said.

“I was compelled to migrate to the capital in search of livelihood.”

He now works at a garment factory in Dhaka, like many other climate migrants who find employment in the city’s sprawling industrial areas.

The Dhaka North City Corp., which governs about 80 percent of the Bangladeshi capital’s 22 million population, estimates that about 2,000 people move from rural areas to the city’s overcrowded slums every day.

“Most inhabitants of the slums were displaced by the rise in sea level, water salinity, river erosion, floods and droughts in rural areas of Bangladesh.”

While the influx of migrants creates an opportunity for Dhaka’s future economic growth, it also poses challenges in responding to the population shift as the city is already considered to be one of the world’s most crowded and most polluted.

“Many industries have developed within the town. That has a very negative impact on biodiversity,” Hasan said.

“It also creates extra pressure on the land of the city, its green spaces and water bodies.”

Migration to the country’s urban centers has been on the rise since the early 2000s, as accelerated coastal and river erosion have been claiming about 10,000 hectares of land every year, according to data from the Disaster Management Bureau.

Syed Aminul Haque, director of COAST Foundation, an NGO working in the country’s coastal areas, estimates that now hundreds of thousands of Bangladeshis are forcibly displaced every year from the country’s disappearing river lands.

“There should be a budget allocation every year for the river protection of the country, which will reduce incidents of river erosion,” he said. “Only then we can bring down the number of the internally displaced.”

But it may be easier said than done.

According to Prof. Atiq Rahman, one of Bangladesh’s most renowned climate scientists, erosion, which has always been a natural phenomenon in riverine Bangladesh, has now been accelerated and made more visible by climate change.

One solution to address it, he told Arab News, would be adapting to the new circumstances by introducing, for example, varieties of crops that grow well on saline soil.

“For people in the coastal areas, where increased salinity has become a growing concern, we need to be prepared to adapt to the changes,” he said.

“We can’t resist it. We need to adjust to the changed situation of the climate at this moment.”

These were the details of the news Portugal sets new July heat record, worsening severe drought for this day. We hope that we have succeeded by giving you the full details and information. To follow all our news, you can subscribe to the alerts system or to one of our different systems to provide you with all that is new.