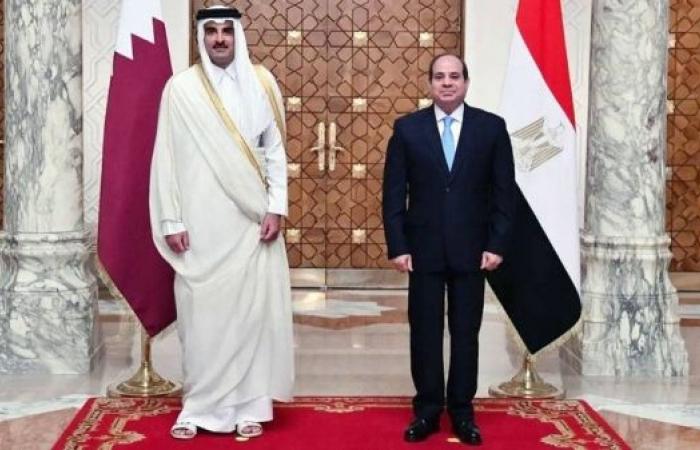 We show you our most important and recent visitors news details Egypt, Qatar eye more cooperation to resolve regional crises in the following article

The Qatari Emir's visit to the Arab world's most populous nation is a testament to the "progress" bilateral relations have made, according El-Sisi's spokesman Bassam Radhi, saying he expected ties to improve even more in the near future.

Acknowledging Cairo's "integral role" in the wider Arab region, including its contributions towards the reconstruction of the wartorn Palestinian enclave of Gaza, the Qatari Emir said his talks with the Egyptian leader also focused on the repercussions of the Russia-Ukraine conflict on the global economy.

Doha plans to ratchet up investment in Egypt given the bountiful opportunities that Cairo has to offer, the spokesman cited the Qatari ruler as saying, adding that the two sides agreed to cooperate further on a number of vital sectors including energy and agriculture.

Sheikh Tamim, who is visiting Cairo for the first time in years, held talks with El-Sisi at the Itihadiya presidential palace. Both leaders inspected an honor guard and bands played the national anthems of Egypt and Qatar, a livestream of the welcoming ceremony posted by the Egyptian presidency showed.

Egypt’s state-run Al-Ahram daily reported the talks aimed at ensuring the “full normalization” of ties between the two nations after resuming their relations early in 2021.

During the visit, an Egyptian-Qatari business council will meet with the aim of improving trade and investments between the countries. Qatar announced in March an investment of $5 billion in Egypt’s economy, which was hit badly by the repercussions of Russia’s invasion of Ukraine.

The visit also comes ahead of US President Joe Biden’s anticipated trip to the Middle East next month. Both El-Sisi and Sheikh Tamim will attend a Saudi Arabia-hosted summit with the US president. The summit will include the leaders of the Gulf Cooperation Council, Iraq and Egypt.

Egyptian Trade and Industry Minister Nevine Gamea was in Doha last week for talks with Qatari officials on promoting trade and investment between the two nations. She met with Mansour Bin Ibrahim Al-Mahmoud, head of the Qatar Investment Authority, to discuss its financing projects in Egypt, according to an Egyptian statement.

Qatar is a major source of investment in Egypt, focusing on the real state and oil sectors, including the building of a $1.3 billion luxury hotel on Cairo’s Nile Corniche. Qatar Petroleum also held a major stake in a $4.4 billion refining firm. — Agencies

These were the details of the news Egypt, Qatar eye more cooperation to resolve regional crises for this day. We hope that we have succeeded by giving you the full details and information. To follow all our news, you can subscribe to the alerts system or to one of our different systems to provide you with all that is new.