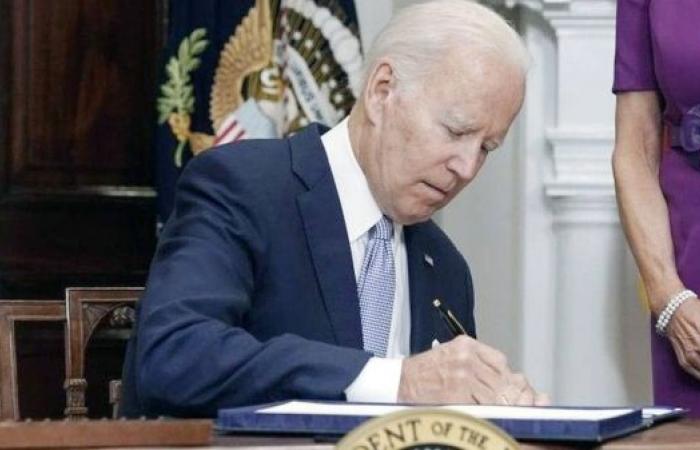 Hind Al Soulia - Riyadh - WASHINGTON — The most significant US gun control bill in nearly 30 years has been signed into law by President Joe Biden.

It imposes tougher checks on young buyers and encourages states to remove guns from people considered a threat.

Congress approved the legislation with bipartisan support this week, following a spate of mass shootings.

"While this bill doesn't do everything I want, it does include actions I've long called for that are going to save lives," Biden admitted.

In May shootings at a supermarket in Buffalo, New York, and a primary school in Uvalde, Texas, left a total of 31 people dead.

As he signed the legislation on Saturday, Biden said relatives of the victims expected the US government to do something. "Well today, we did," he added.

• Closing the so-called "boyfriend loophole" by banning all those convicted of domestic abuse from owning a gun — not just those who are married to their victims or live with them.

President Biden, as well as gun safety groups, had pushed for bigger reforms - including banning assault weapons, which were used in the Texas and Buffalo shootings - or at least an increase in the age at which they can be purchased.

The gunman in the Texas shooting is believed to have bought two semi-automatic rifles days after turning 18.

The new legislation is also significant because it is the first time in decades that the reforms have received support from both Democrats and Republicans.

Historically, efforts to strengthen US gun laws have been blocked by the Republican party.

The National Rifle Association (NRA) opposed the bill, arguing that it would not stop the violence.

It has the highest rate of firearms deaths among the world's wealthy nations — more than 20,900 people have been killed in gun violence in the US this year, according to Gun Violence Archive, a non-profit research group.

But it is also a country where many cherish gun rights that are protected by the Constitution's Second Amendment.

The last significant federal gun control legislation was passed in 1994, banning the manufacture for civilian use of assault rifles and large capacity magazines — but it expired a decade later.

On Thursday, the Supreme Court struck down a New York law restricting who can legally carry a gun — effectively expanding gun rights.

And Republican voters whose support they need to win primary elections — the selection process within each party — are even more opposed to reform. — BBC

These were the details of the news Biden signs into law landmark gun control bill for this day. We hope that we have succeeded by giving you the full details and information. To follow all our news, you can subscribe to the alerts system or to one of our different systems to provide you with all that is new.