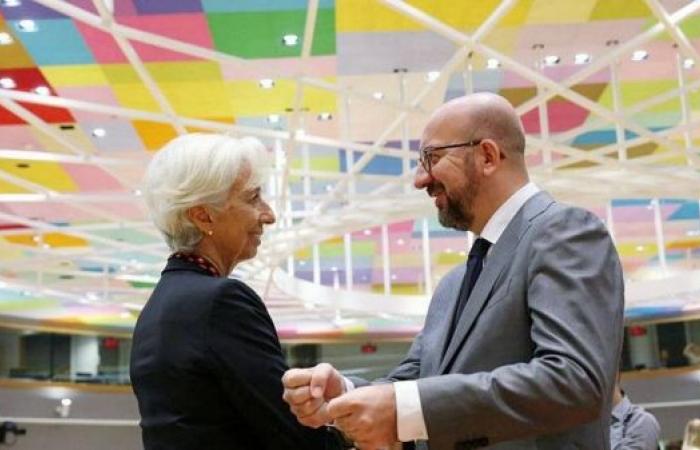 Hind Al Soulia - Riyadh - BRUSSELS — European leaders, who worried that winter will be a tough one for their citizens, pledged deeper cooperation and coordination on Friday to tackle the energy crisis.

The two-day European Council summit in Brussels ended with the 27 heads of state tasking the Commission to continue its work to identify ways to curb rising energy prices - including through possible price caps — or to secure alternative sources of supply at affordable prices.

The Council meanwhile, was called upon to take any appropriate measures to ensure closer energy coordination between member states.

This comes after several leaders warned that a difficult winter might be ahead as Russia has totally or partially cut deliveries of fossil fuels to 12 member states.

On a lighter note, leaders voted to allow Croatia to become the twentieth member of the eurozone with the single currency to officially come into circulation in the country of 4 million on Jan. 1 2023.

Finally, the EU vowed to do everything possible in the next few days to ensure that progress in the membership application of North Macedonia and Albania can take place after lawmakers in Sofia backed a French proposal to lift Bulgaria's veto over Skopje accession.

The next regular meeting is planned for Oct. 20 but there'll be plenty of geopolitical action to get you by in the coming weeks.

As a reminder, G7 leaders meet from June 26 to 28. This will be immediately followed by a blockbuster NATO summit in Madrid from 28 June 28 to 30.

The French President Emmanuel Macron affirmed that the fact he lost his absolute parliamentary majority and will have to rely on lawmakers from other political formations to further his domestic agenda is "terribly banal at the European level."

"It's about building understanding to convince everyone" and "get constructive majorities," he said. "That's what we will do", he continued, "either through coalition or agreements on texts to move forward on a clear agenda".

"It gives us more work to do because we have to reconcile convergence in our countries and the ability to build compromises," he went on, assuring that "France knows how to compromise, including yours truly".

He also dismissed that although France is now in a similar position to Germany and Italy, where coalitions are already in place, could weaken leadership in Western Europe, he said instead that this "reflects the democratic vitality of our countries".

A major file the French presidency was not able to conclude yet has been the global corporate tax which is being blocked by Hungary.

The tax reform is part of a global deal achieved last year at the Organization for Economic Co-operation and Development (OECD). It has been endorsed by 136 countries representing more than 90% of global GDP.

Hungary had agreed with the plan but is now arguing such a tax would be damaging as the world grapples with the economic impacts of the war in Ukraine.

But others suggest the Hungarian veto may be in the hope of securing further concessions from the European Union, which has yet to approve the country's recovery plan over concerns related to corruption, cronyism and fraud. A similar tactic was seemingly, successfully, deployed by Poland.

"We will do everything both Europeans and non-Europeans involved in these efforts", Macron said, "to deblock this Hungarian veto."

Macron also defended his EU presidency and said "very humbly that the Europe of June 2022 is very different from the one of January 2022".

He thanked the three European institutions, which he said, acted in unison during these past six months to advance the French agenda while at the same time deal with the repercussions of Russia's invasion of Ukraine.

"We have advanced our agenda," he said, flagging the work that had been done to regulate large tech companies and online content, the agreement on an EU minimum salary law and on gender quota to boost female participation at the board level of large European companies — the latter of which had been stuck for a decade.

He also hailed the leaders' backing of the Strategic Compass, which for the first time outlines a common vision for the 27 member states on the EU's place in the role, the threats it faces and how it should tackle them.

"We have advanced our agenda," he said, noting that "this agenda has also been very coherent with this geopolitical change" as war returned to Europe.

"It has only reinforced, accredited, validated the conviction at the heart of our work of the need for more sovereignty" for Europe, he said.

The Czech Republic will lead the bloc's agenda, with its rotating six-month presidency kicking off on July 1. "I would like to wish Prime Minister Petr Fiala much courage," Macron offered.

Macron gave more details about what leaders agreed on regarding the construction of a new entity that would allow for closer relations with European non-member states.

"We will do things very simply," he said, adding that it will be the reverse of what the EU has typically done which is to build a new institution before clear objectives have been laid out.

It is for now tabled as a series of meetings at the leaders' level with the aim to "ritualize and progressively structure it", which he said is a "very pragmatic way to move forward."

"We will invite from Iceland to Ukraine," he continued, and its "border will go to the east of the EU including if I may say Ukraine and Moldova".

The President of the European Commission Ursula von der Leyen. Meanwhile, said that her institution is said that working on a Common European Emergency Demand Plan. She said she would present it to the leaders in July.

"We've learnt our lesson from COVID-19," she said, in that when EU member states work together, "we are strong and we have an enormous impact."

Russia, the EU's main supplier, has partially or totally cut deliveries to 12 member states so far, she noted.

Asked about the contracts the EU has struck with alternative sources of gas supply, she said that Liquified Natural Gas (LNG) deliveries from the US have risen 75% this year compared to last year while Norweigian pipeline gas is up 15% and deliveries from Azerbaijan are up by 90%. She also flagged contracts recently signed with Israel and Egypt.

Overall, Russia provided 150 billion cubic meters (bcm) of gas annually before the war that would have to be replaced given the EU has pledged to reduce by two-thirds its imports from Russia by the end of the year.

US deliveries should total 15 bcm this year and rise by a further 50 bcm in the following years. The EU has also committed to cutting its imports of Russian oil by 90% by the end of the year.

For von der Leyen, the EU's shift away from Russian fossil fuels represents "a perfect business opportunity to gain a new, very important client over time and to go into the vacuum that Russia is leaving" for other countries.

The Commission chief also emphasized that it is important for the EU to ensure that "the overall network of interconnectors and pipelines in the EU is fit for purpose so you can have flows in all directions."

The Commission's plans will also "look into potential curtailment or smart energy-saving measures", she said.

Finally, she reiterated that "the euro area is forecast to continue growing in 2022 and 2023 although less than anticipated before the war."

"The war in Ukraine is having a heavy impact both on growth and on inflation," she stressed.

Also, German Chancellor Olaf Scholz said that the EU had not made as much progress as they'd like on enlargement.

"We need to be capable to absorb new members. We need institutional reforms that are urgently necessary," the German Chancellor said at a briefing following the summit, including majority voting (instead of unanimity) to "make sure that the rules of democracy and the rule of law are applied."

And, Italy is in favor of splitting North Macedonia and Albania's EU candidate dossiers in the event of further delay to beginning accession negotiations, Prime Minister Mario Draghi said after the EU Council summit.

Bulgaria has vetoed launching accession talks for North Macedonia, which has also put on hold negotiations for Albania whose candidatures are being considered together. — Euronews

These were the details of the news Croatia to officially join eurozone as EU summit wraps up for this day. We hope that we have succeeded by giving you the full details and information. To follow all our news, you can subscribe to the alerts system or to one of our different systems to provide you with all that is new.