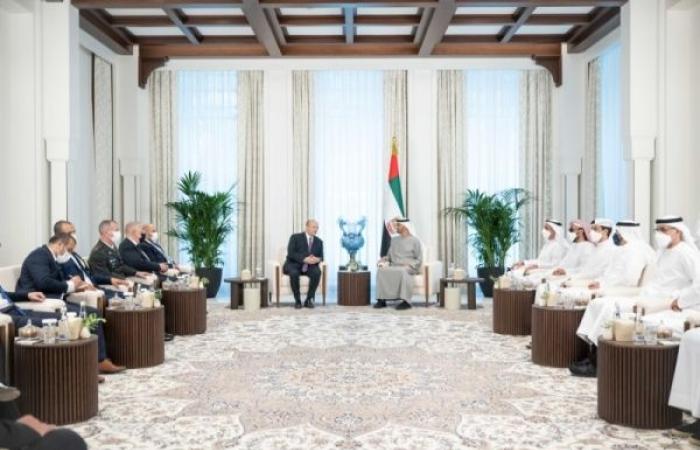 At the start of the meeting, Sheikh Mohamed welcomed Bennett who offered his condolences to him and the Emirati people on passing of Sheikh Khalifa bin Zayed Al Nahyan. He also lauded the role played by the late Khalifa bin Zayed to extend bridges of communication and peace globally.

The Israeli Prime Minister also congratulated Sheikh Mohamed bin Zayed on assuming the presidency of the UAE and wished him good luck to achieve prosperity and development for Emiratis.

He said that his country looks forward to working jointly with the UAE to expand cooperation horizons in the coming period for the benefit and prosperity of their peoples and the peoples of the region.

In turn, the UAE President extended thanks for the warm feelings of the Israeli Prime Minister towards the UAE and wished stability and prosperity for the Israeli people.

During the meeting, the UAE President and Israeli Prime Minister discussed cooperation paths and development opportunities in various investment, economic, and development sectors as well as food security and health fields, and other vital sectors to achieve the future aspirations of the two countries.

Bennett departed the UAE. The Israeli Prime Minister was received and seen off by Sheikh Abdullah bin Zayed. — WAM

These were the details of the news UAE president receives Israeli PM in Abu dhabi for this day. We hope that we have succeeded by giving you the full details and information. To follow all our news, you can subscribe to the alerts system or to one of our different systems to provide you with all that is new.