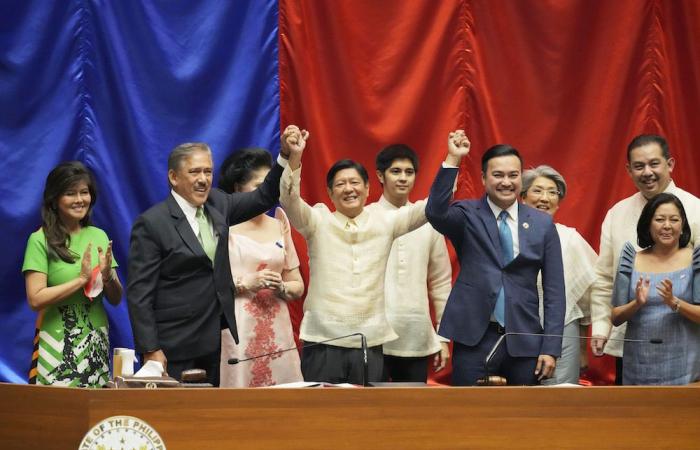 Jeddah - Yasmine El Tohamy - MANILA: Ferdinand Marcos Jr. was proclaimed the next president of the Philippines by a joint session of Congress on Wednesday following a landslide election triumph 36 years after his dictator father was ousted in a pro-democracy uprising.
The Senate and House of Representatives also declared that his separately elected vice presidential running mate, Sara Duterte, had won by a wide margin. She is the daughter of outgoing President Rodrigo Duterte, whose turbulent six-year term ends on June 30.
They will lead a nation battered by COVID-19 lockdowns, crushing poverty, gaping inequality, Muslim and communist insurgencies, crime and political divisions further inflamed by the May 9 election.
Marcos Jr., a 64-year-old former governor, congressman and senator, has refused to acknowledge or apologize for massive human rights violations and plunder under his father’s strongman rule and has defended his legacy.
When they take office, Marcos Jr. and Sara Duterte will likely face demands to prosecute her father over thousands of killings of mostly poor suspects under his yearslong crackdown on illegal drugs. The deaths are currently under investigation by the International Criminal Court.
Marcos Jr. received more than 31 million votes and Sara Duterte more than 32 million out of more than 55 million votes cast in the election. It was the first majority presidential victory in the Asian democracy in decades.
During the campaign, they avoided controversial issues and focused on a call for national unity, although their fathers’ presidencies opened some of the most volatile divisions in the country’s history. Marcos Jr. appealed to be judged “not by my ancestors, but by my actions.”
Sen. Imee Marcos, the president-elect’s sister, thanked those who voted for her brother after what she described as years of humiliation.
“We’re very grateful for a second chance,” she told reporters before the proclamation. “Our family went through a lot,” she said, citing “all sorts of cases and ridicule” against them.
In Marcos Jr.’s campaign headquarters, supporters waved Philippine flags, flashed the victory sign and held a streamer congratulating him and Sara Duterte.
Still, both have been hounded by their fathers’ reputations.
Riot police used a water cannon and shields to prevent a few hundred activists from marching to Congress to oppose Wednesday’s proclamations, injuring at least 14 protesters, the left-wing group Bayan said. It said the forceful dispersal “could be a portent of things to come.”
Last week, human rights activists submitted a petition to the Supreme Court against Marcos Jr.’s eligibility, citing his past tax conviction. They asked the court to block his proclamation, but no such order was issued. The complaint was earlier dismissed by the Commission on Elections.

These were the details of the news Marcos Jr proclaimed next Philippine president with huge win for this day. We hope that we have succeeded by giving you the full details and information. To follow all our news, you can subscribe to the alerts system or to one of our different systems to provide you with all that is new.