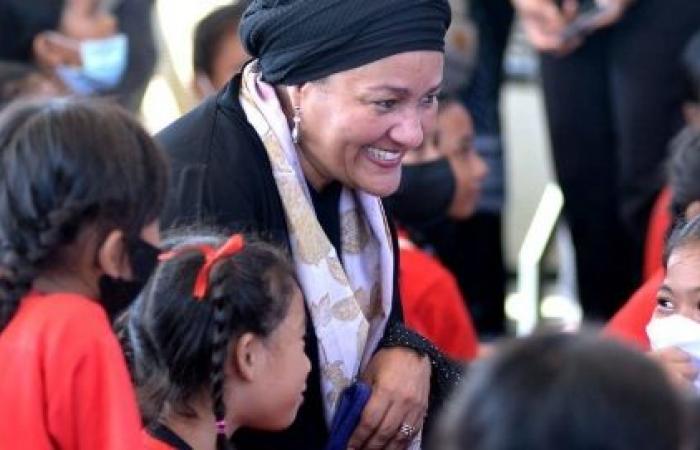 Hind Al Soulia - Riyadh - JAKARTA — In their red school uniforms, with backpacks on their heads to protect them from falling debris, More than 200 students and teachers from Tanjong Benoa Elementary School on the Indonesian island of Bali, filed calmly up three flights of stairs to the rooftop of a hotel, close to their classrooms.

Thankfully, the alarm that prompted them to evacuate was just a practice drill, but by following the planned evacuation route, students said they felt confident they could respond quickly and calmly in any real emergency.

“I will tell my parents, my family, and I will try my best to keep them safe,” fourth-grade student, Ni Putu Anika Desintha Pradnyan Dewi, told UN Secretary-General Amina Mohammed after the earthquake and tsunami drill.

The Deputy Secretary-General, who is in Bali ahead of the Stakeholder Forum of the seventh Global Platform for Disaster Risk Reduction (GPDRR) on Wednesday, in turn promised that when she got back to UN Headquarters, she would “tell students in New York City, about the leadership Balinese students demonstrated, during the drill”, and how resilient students are overall in Bali.

Building the resilience of communities and nations is a central focus of the GPDRR, the world's foremost gathering on reducing disaster risk.

For host nation Indonesia, which straddles the volatile Pacific Rim of Fire with its shifting tectonic plates, resilience is a national imperative.

Indonesia recorded more than 3,000 disasters across its 17,000 islands in 2021, the equivalent of eight disasters per day. Earthquake and tsunamis pose a particularly grave threat to Indonesia.

In 2004, the Indian Ocean tsunami killed some 230,000 people, most of them in the country’s western Aceh province. And as recently as 2018, the Palu earthquake and tsunami killed more than 4,300 in Sulawesi.

But the COVID-19 crisis has dwarfed those disasters. Its socioeconomic fallout disproportionally disadvantages young people, women and girls; as well as indigenous people and other vulnerable populations most of risk of being left behind.

That is especially evident on Bali, where the pandemic-driven downturn in tourism led to widespread loss of livelihoods and food insecurity.

“The pandemic’s impacts serve as a reminder of how disasters touch every aspect of life, from health to education, to work and livelihoods, to gender equality, to nutrition, to peace and security,” the UN deputy chief told an audience of local officials and community leaders in Bali.

“Indeed, disasters pose a major threat to the achievement of the Sustainable Development Goals. They have the potential, in minutes and hours, to wipe away the results of years and decades of development work.”

Although tsunamis and earthquakes can be devastating, most of the disasters that caused 665 fatalities in Indonesia in 2021 and displaced more than eight million, were floods and other extreme weather events, such as landslides, and forest and land fires.

The increasing frequency and severity of such events is just one consequence of the global climate emergency.

Shrinking mangrove forests, are one of the less reported drivers - and results - of climate change. Mangroves can sequester four times the amount of carbon as rainforests. But they also serve as a last line of defense against tsunamis.

In the wake of the 2004 Indian Ocean tsunami, field studies in several affected countries indicated that mangrove forests had played a crucial role in saving human lives and property.

But around the world, mangroves are under threat. Areas of mangrove coverage decreased by just over a million hectares, between 1990 and 2020, according to the UN’s food agency, FAO.

In Bali, the UN Deputy Secretary-General joined scores of students to plant mangrove trees near the provincial capital Denparsar, as part of a broader UNDRR-backed Indonesian Government initiative that aims to plant 10 million mangrove trees across all 34 of the country’s provinces.

“You are already leaders,” she told the Indonesian students leading the local tree-planting initiative near Denpasar, “so teach those coming behind you, teach those ahead of you, especially leaders who have not quite done what they should do with the environment, so they can meet the Paris Agreement, so that they can meet the Sustainable Development Goals (SDGs).” — UN News

These were the details of the news Deputy UN chief praises resilience of Bali students in face of disaster threats for this day. We hope that we have succeeded by giving you the full details and information. To follow all our news, you can subscribe to the alerts system or to one of our different systems to provide you with all that is new.