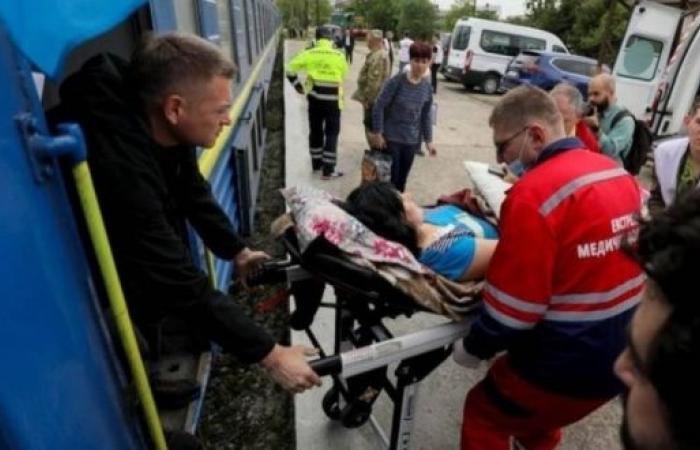 Hind Al Soulia - Riyadh - KYIV — Russian forces in eastern Ukraine are intensifying attacks on a key city as they seek to seize the Donbas region.

Severodonetsk, the largest city under Ukrainian control in Luhansk province, has come under intense artillery and missile fire from Moscow's forces.

On Sunday, local officials said Russian troops were repelled after trying to enter the city from four directions.

It comes as the UN said the global number of displaced people has risen above 100 million for the first time.

Officials said Russia's invasion of Ukraine has contributed to the grim milestone. More than 14 million people are thought to have fled their homes since the war began on 24 February.

The UN's High Commissioner for Refugees, Filippo Grandi, said the announcement should serve as a wake up call for world leaders.

"The international response to people fleeing war in Ukraine has been overwhelmingly positive," Grandi said. "But ultimately humanitarian aid is a palliative, not a cure.

"To reverse this trend the only answer is peace and stability so that innocent people are not forced to gamble between acute danger at home or precarious flight or exile."

Meanwhile, Luhansk Governor Serhiy Gaidai accused Moscow of adopting a "scorched-earth approach" in its efforts to capture the city of Severodonetsk.

"Every day they are trying to break the line of defence," Gaidai said. "They are simply systematically destroying the city. Everywhere is being shelled constantly."

The city of 100,000 people sits on a strategic position on the Donets River, with UK defence officials saying it has likely become one of Russia's "immediate tactical priorities".

Gaidai warned that Russian forces have destroyed all but one bridge across the Donets river and said that the city is at risk of being cut off.

He also accused Russian tanks of firing on residential buildings during fighting in the city and of seeking to erase Severodonetsk "from the face of the earth".

"The enemy threw all his forces to storm Severodonetsk, on the outskirts of which there are constant battles," Ms Denisova wrote.

Elsewhere, at least seven civilians were killed and eight others were wounded in Sunday's bombardment of the Donetsk region, according to the Ukrainian army's Facebook page.

Shelling and missile strikes continued to pound Kharkiv in the north, as well as Mykolaiv and Zaporizhzhia in the south, officials said.

Meanwhile, the UK's Ministry of Defence has said that Russia has likely suffered a similar number of casualties in Ukraine as it did during the entirety of the Soviet war in Afghanistan.

It said "a combination of poor low-level tactics, limited air cover, a lack of flexibility, and a command approach which is prepared to reinforce failure and repeat mistakes officials" had contributed to the high figures.

It is unclear exactly how many casualties Russia has suffered in its invasion.

Moscow, which says it launched a "special operation" to demilitarise its neighbour, has not updated its official figures since March, when defence officials said some 1,351 troops had been killed. — BBC

These were the details of the news Russian assault on key Donbas city intensifies for this day. We hope that we have succeeded by giving you the full details and information. To follow all our news, you can subscribe to the alerts system or to one of our different systems to provide you with all that is new.