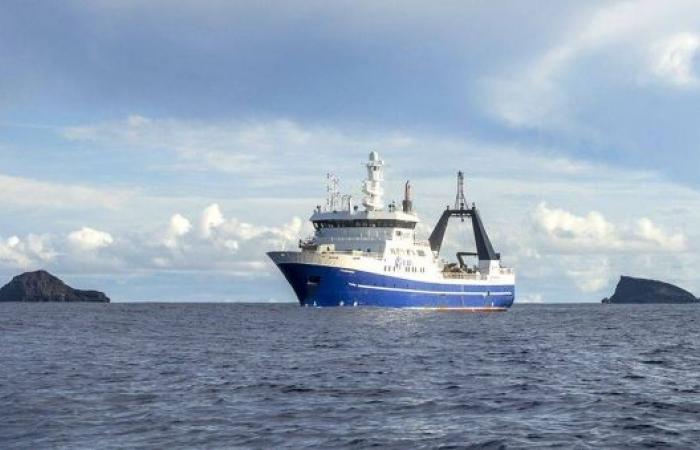 A New Zealand-led team has just finished mapping the flanks of the seamount, which many people thought might have been torn apart in the ferocity of the event.

The Tonga eruption produced the biggest atmospheric explosion recorded on Earth in more than a century.

It generated tsunamis across the Pacific and in other ocean basins around the world. It even lifted the clouds over the UK, 16,500km away. Mercifully, only a handful of people lost their lives in the kingdom of Tonga.

New Zealand's National Institute for Water and Atmospheric (NIWA) Research has now managed to get in close with a ship to map the post-eruption shape of Hunga-Tonga Hunga-Ha'apai (HTHH) and of the surrounding seafloor.

Although there's clearly been a lot of ash deposition and movement of sediment, the volcano continues to stand tall.

"Given the violence of the eruption on 15 January, I'd expected the edifice to either have collapsed or been blown apart, and this is not the case," he explained.

"While the volcano appeared intact, the seafloor showed some dramatic effects of the eruption. There is fine sandy mud and deep ash ripples as far as 50km away from the volcano, with gouged valleys and huge piles of sediment."

From its 22,000-sq-km survey, the Tangaroa team calculates that about 6 to 7 cubic km of material have been added to the seafloor.

This is ash and rock that was initially ejected by the volcano into the air but which then fell back down into the water and descended the flanks of the submarine mountain to run out over the ocean bottom.

These density, or pyroclastic, flows were the major factor in generating the tsunami waves that inundated local islands, Mr Mackay told BBC News.

The 1.8km-high HTHH was last surveyed in 2016. Combining the previous data with Tangaroa's new information has allowed scientists to make a "difference map".

The deposition of all the new material is marked in red (see top image). Blue indicates where material has been lost. This is mostly from around the neck of the volcano. The researchers say 2 to 3 cubic km has come away from the upper portions of HTHH.

In addition to the sonar survey, the Tangaroa's crew also studied the local ocean ecosystem.

Unsurprisingly, the flanks of the volcano are now devoid of biology, but the team only had to travel about 15km to find fish and mussels thriving on other seamounts.

"Both of these examples imply a resilience of animal populations in the region," said NIWA fisheries expert Dr Malcolm Clark. "And this is important because it can give insights into how the eruption can affect the surrounding sealife and what the possible chances of recovery might be."

The researchers also tested the water column for physical and chemical characteristics, including temperature, nutrients and oxygen concentration. In places, the ash-fall has had a fertilisation effect and triggered plankton blooms. But the flip side is that researchers could identify, too, zones where oxygen in the water has become depleted.

The team took thousands of pictures and collected hundreds of samples during the cruise, including 115 sediment cores and 250kg of rock, some of which was newly formed in the eruption.

The RV Tangaroa did not survey directly over Hunga-Tonga's opening, or caldera.

This will be left to a robot boat developed by the UK company Sea-Kit International. The 12m uncrewed surface vessel, called Maxlimer, is currently in Singapore en route to Tongatapu, the main island in the Tongan archipelago.

Because the boat can be controlled at a distance, it will be permitted to operate for extended periods over the caldera. The caution is warranted because the volcano appears still to be active.

NIWA marine ecologist Dr Sarah Seabrook said this was evident from a persistent ash layer near the volcano at a depth of about 200m.

"Our initial analyses on the origin of the ash layer suggest that it is not a remnant of the January eruption, but may instead show the volcano is still venting. That is, it's actively releasing volcanic ash, albeit on a far smaller scale," she explained.

The information from Maxlimer's multi-beam sonar equipment is expected to be particularly instructive. A naval ship that sailed across the caldera recently found the depth of water over the caldera had increased dramatically.

"Maxlimer definitely has the ability to measure that deep," said Mackay. "And what we're really hoping is that once we get a really accurate map of the caldera, we can confirm those volumes of material that we've already initially indicated."

The RV Tangaroa's month-long mapping project was funded by the Nippon Foundation of Japan and organised by NIWA, together with Seabed2030, which is an international effort to properly chart Earth's ocean floor. — BBC

These were the details of the news Explosive Tonga volcano 'surprisingly intact' for this day. We hope that we have succeeded by giving you the full details and information. To follow all our news, you can subscribe to the alerts system or to one of our different systems to provide you with all that is new.