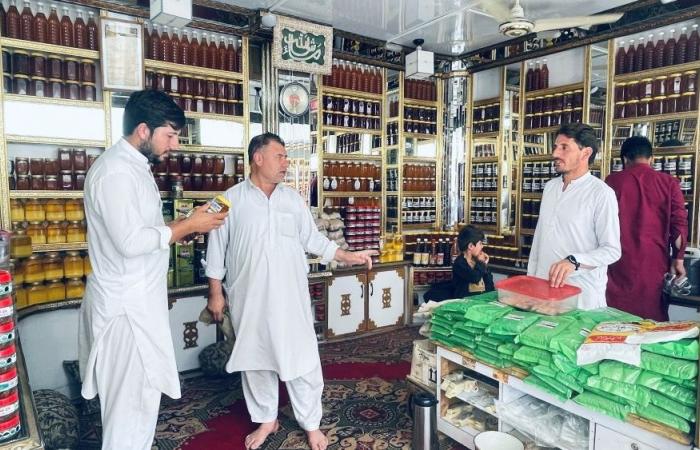 Jeddah - Yasmine El Tohamy - PESHAWAR: Four decades ago, when war broke out in Afghanistan, Nazak Mir and his family left their home to seek safety in neighboring Pakistan and soon began a new life as refugees.

When they crossed the border from Gardez in Paktia province to Pakistan’s northwestern Khyber Pakhtunkhwa in 1981, Mir arrived empty handed, but with a skill that in exile unexpectedly gave him a chance to follow in the footsteps of his ancestors as a beekeeper.

“Among other things, we left behind 54 beehive boxes that my elder uncle had kept for years. It was a family business before migration,” he told Arab News.

When the UNHCR, the UN refugee agency, offered beekeeping training in the refugee camp where his family had taken shelter, he knew it would be lifechanging.

Besides setting in motion his own career as a businessman, Mir also became a mentor to thousands of other refugees in Khyber Pakhtunkhwa. The hilly province bordering Afghanistan hosts nearly 800,000 Afghans who fled armed conflict in their country. They are now the main force behind beekeeping in Pakistan, a major exporter of honey.

The South Asian nation currently produces an estimated 30,000 to 35,000 tons of honey annually, and exports more than a fifth of it to Gulf countries, after the industry rebounded from the fallout of the coronavirus pandemic, according to All Pakistan Beekeepers, Exporters, and Honey Traders Association secretary-general, Sher Zaman Mohmand.

He told Arab News that the number of people involved in the sector, including other production activities than beekeeping, was around 1.6 million, and 95 percent of them lived in Khyber Pakhtunkhwa, where the climate and terrain are conducive to honey production.

“Of them, more than 60 percent are Afghan refugees,” he said.

Some of them, similar to Mir, have already introduced their children to the profession.

“Now, my son has started his own beekeeping business,” he said. But he expressed worries as to whether it would remain lucrative in the future.

Pakistan is one the nations most affected by disasters driven by the changing climate, and for the past few years has endured heightened heatwaves that have upended its natural ecosystems.

With challenges related to climate change and deforestation depriving bees of food, their populations have been decimated in recent years.

“Lack of food causes the bees to fight amongst each other,” Mir’s son, Farhadullah, said. “Hot and cold weather also affects their health and honey production.”

“Honey producing seasons are defined by different flowering seasons. Timely and enough rains often result in four or five honey producing seasons while drought years reduce the honey seasons to just two,” Mohmand said, adding that he felt the situation could be mitigated if the government introduced strict measures to curb deforestation.

Pakistan has been trying to reforest the country and launched an ambitious five-year tree-planting program, the 10-Billion Tree Tsunami, to counter the rising temperatures, flooding, droughts, and other extreme weather in the country that scientists link to climate change.

While more than 330 million trees have already been planted under the initiative, mostly in Khyber Pakhtunkhwa, Mohmand said the push should extend to other provinces as well, especially around the sites of the $65 billion Beijing-funded China-Pakistan Economic Corridor, the largest infrastructure investment project in the country.

“The government could promote forestry, particularly along the China-Pakistan Economic Corridor routes,” Mohmand said. “Plants like the Indian rosewood, acacia, and jujube can be grown in many areas, including on barren lands across the country.”

These were the details of the news Afghan refugees in Pakistan help keep honey business abuzz for this day. We hope that we have succeeded by giving you the full details and information. To follow all our news, you can subscribe to the alerts system or to one of our different systems to provide you with all that is new.