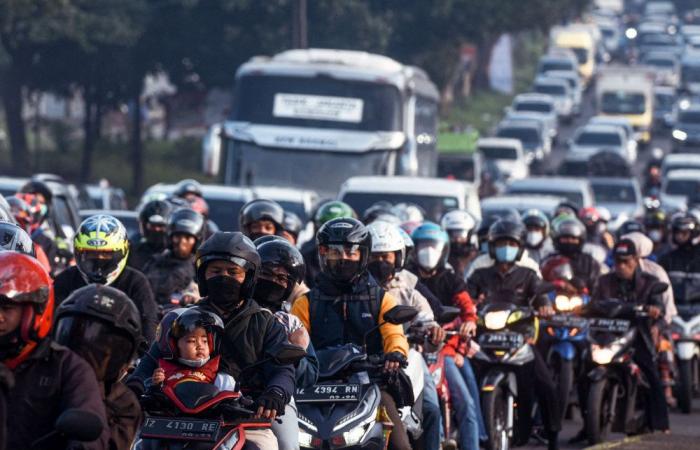 Jeddah - Yasmine El Tohamy - JAKARTA: Millions of Indonesians were stuck for up to 15 hours in traffic jams on Saturday as they traveled back to their hometowns to spend the Muslim holiday season of Eid Al-Fitr with their families.

Indonesia, home to the world’s largest Muslim population, has allowed the annual homecoming tradition known as “mudik” for the first time since it was banned for two years to curb the spread of coronavirus.

More than 85 million Indonesians, about 31 percent of the total population, are expected to travel at the end of Ramadan this year, according to a survey from the Transportation Ministry, after the government eased travel restrictions, including scrapping testing requirements for those who have received COVID-19 booster shots.

“I am so happy. I can go on mudik once again, just like the years before the pandemic. I can spend Eid Al-Fitr this year with my family and relatives,” Iwan Patoni, a 33-year-old hairstylist from Surakarta, Central Java, told Arab News.

Patoni said the trip from Banten province, where he works, to his hometown had taken him 15 hours.

“The enthusiasm was high this year, just like before the pandemic. It was crowded, congested, and pretty tiring,” Patoni said.

Dheamyra Aysha, a 21-year-old college student heading to the capital Jakarta from Bandung, West Java, said she was stuck on the road for 10 hours, a trip that would normally take about three hours.

“This is the first time I experienced such a long trip from Bandung to Jakarta. It’s really memorable because I’ve never had to endure a complete stop during a car journey and witnessed others protesting on the road,” Aysha told Arab News.

Aerial footage taken this week showed long lines of cars crawling along on either side of toll booths on some of the main routes out of Jakarta, with the Transportation Ministry reporting nearly 1.4 million vehicles leaving the Greater Jakarta Area since April 22.

Travelers also crowded airports, train stations, and bus terminals throughout the week, brimming with excitement as they left big cities to reach their hometowns to celebrate the religious holiday.

Indonesia grappled with one of the highest rates of COVID-19 infections in Asia, but the country has been easing many pandemic restrictions as the public health situation improves. However, health experts remain concerned that increased mobility and interaction might lead to another spike in coronavirus cases.

“The risk of the current situation is lower than before, but that doesn’t mean there’s no potential of an increase,” Dicky Budiman, an epidemiologist at Griffith University in Australia, told Arab News.

Indonesia’s Health Ministry spokesperson, Siti Nadia Tarmizi, said the government had sped up vaccination efforts in popular mudik destinations and points of origin as part of its COVID-19 mitigation strategy during the Eid holiday season.

These were the details of the news Millions of Indonesians stuck in huge traffic jams as annual Eid exodus returns for this day. We hope that we have succeeded by giving you the full details and information. To follow all our news, you can subscribe to the alerts system or to one of our different systems to provide you with all that is new.