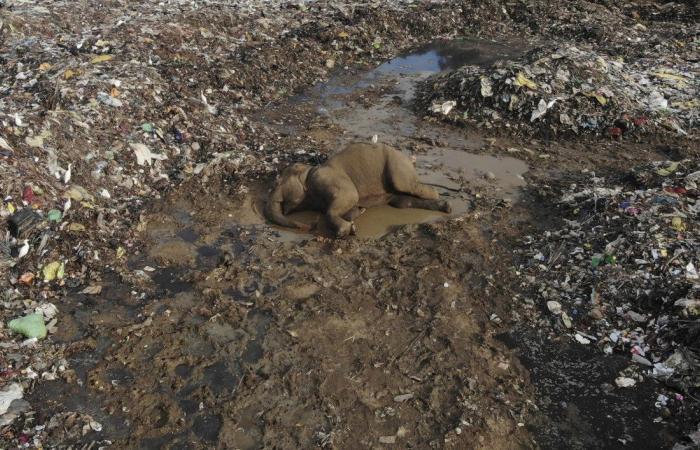 Jeddah - Yasmine El Tohamy - COLOMBO: Disturbing images of a herd of elephants grazing in a garbage pit in Ampara, in Sri Lanka’s Eastern Province, have been making the rounds ever since media reports suggested that many had died after ingesting plastic waste.

The reports estimate at least 20 of the elephants that fed on the open dump had died in the past eight years.

While conservationists question the findings, saying ingestion of plastic is not directly linked to the animals’ deaths, the issue reveals a broader problem: Sri Lanka’s poorly regulated garbage disposal.

The island generates about 7,000 tons of solid waste a day, most of which lands in unchecked open dumps. Landfill sites, banned in many countries, are often close to forest cover or water sources, and wild animals have begun to see them as sources of food.

“About 75 percent of the garbage dumps in the country are open dumps,” Pubudu Weerarathne, director of the Species Conservation Center at the University of Colombo, told Arab News.

“Animals get used to the taste of human food and begin to look for it more.”

He added: “In the case of elephants, this leads to raids and more conflict with humans. And then, of course, there is the more direct impact on their health as a result of ingesting waste.”

But it is not plastic waste that proves lethal for elephants, which are protected by their simple digestive systems. Cattle and deer often die a painful death as polythene stays in their bodies, leading to bowel obstruction.

“Elephants are what we call ‘hindgut fermenters,’” Prof. Prithiviraj Fernando, an expert in research relating to elephants and human-elephant conflict, told Arab News.

“Their digestive systems are less complex than that of ruminants like cattle. As a result, plastics and polythene don’t get stuck in the digestive system, but pass through.”

Even though plastic waste is not the immediate cause of elephant deaths, landfills are no less hazardous for the animals. Some die from poisoning after eating fermented organic matter.

Dr. Tharaka Prasad, wildlife health director at the Department of Wildlife Conservation, said the process through which bacteria break down food refuse makes it dangerous for animals.

“Anaerobic digestion causes excretion of toxins into the food environment, which in turn can lead to a collapse of bowel movement, consequently causing partial paralysis of the gut, ending in death,” he said.

But the greatest danger for the animals comes as they encroach human settlements while feeding on landfills.

“More elephants die as a result of gunshot wounds, or hakka patas,” U.L. Taufeek, deputy director for elephants at the wildlife department, said, referring to small, improvised explosive devices in the shape of firecrackers that people use to scare animals away from villages.

There are about 5,000 elephants in the country, and the animals are a symbol of national and cultural pride. The Sri Lankan elephant, a subspecies of the Asian elephant, is classified as endangered.

Killing elephants is prohibited, but their deaths due to human-elephant conflict are commonplace. In 2019, 407 such deaths were reported in Sri Lanka — the highest rate in the world.

Elephants are not the only victims of ineffective waste management policies. In 2017, a landslide at the Meethotamulla dump in the capital Colombo killed 19 people.

Toxic landfill fires and pollution from the same dump, as well as in other parts of the country, have for years troubled local communities, with residents complaining of health complications.

“We have a huge waste management issue in this country,” Dr. Ajantha Perera, an environmentalist and campaigner for recycling, told Arab News.

The activist and academic, who contested the 2019 presidential election on the promise of addressing the country’s mounting garbage issue, said that national action plans and waste management policies have been in place for years.

“But until there is political will, there will be no change.”

These were the details of the news Elephant deaths lift lid on Sri Lanka waste problem for this day. We hope that we have succeeded by giving you the full details and information. To follow all our news, you can subscribe to the alerts system or to one of our different systems to provide you with all that is new.