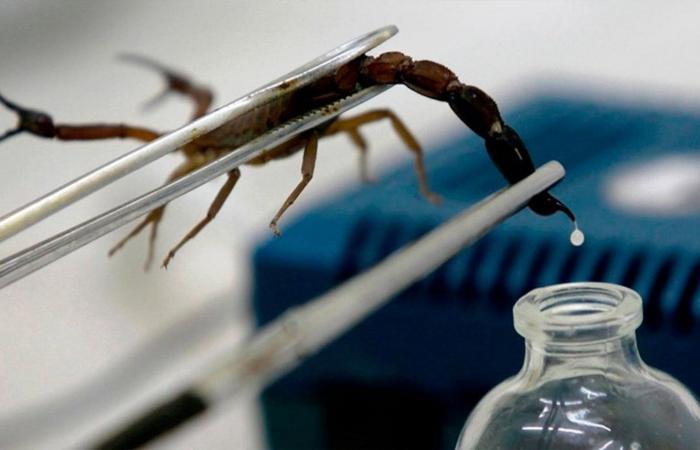 A team of Moroccan researchers from Hassan II University in Casablanca succeeded in developing a robotic device that safely extracts scorpion venom.

The researchers obtained, according to Sky News Arabia, a patent for this innovation, which relies on a modern method instead of mechanical stimulation or manual electrical stimulation.

This invention represents scientific value in the pharmaceutical industry, because it contains chlorotoxin, which is likely to be used in the treatment of cancer.

The idea of ​​using the device is to install the scorpion’s tail and send an electric charge that stimulates it to produce drops of poison.

This device, which consists of a pneumatic and vibrating system, can emulsify the poison from a distance, without the need to resort to traditional methods that are not without risks, as it rapidly collects droplets of poison through a network of automated carriers and then stores them.

Anas El Kettani, the director of the thesis for this innovation, confirmed that the invention came after conducting a number of experiments in the Biology and Health Laboratory at the Faculty of Sciences Ben M’sik affiliated to Hassan II University in Casablanca..

El Kettani explained that Morocco is considered a home for scorpions par excellence, but extracting poison from them remains a risky process, and is considered a challenge in view of the danger this process poses to this creature and to humans alike..

He noted that the device enabled this process to be performed in a very safe and high quality manner that preserves the extracted material, noting that this innovation is the only device in the world capable of carrying out this process and extracting poison from more than 32 scorpions at once, before assembling it in a biological box that preserves all its properties..

The creators of this robot hope to spread its use and disseminate it on a larger scale by marketing it at the global level, in order to use it in the process of extracting poison, ensuring speed and safety, and maintaining the safety of the scorpion and the user of the device..

Al-Katati pointed out that the research team has issued a new book under the title “The Guide to Scorpions in Morocco”, which includes all the accurate information about scorpions inside the Kingdom..

These were the details of the news Moroccan invention..a robotic device that safely extracts scorpion venom for this day. We hope that we have succeeded by giving you the full details and information. To follow all our news, you can subscribe to the alerts system or to one of our different systems to provide you with all that is new.