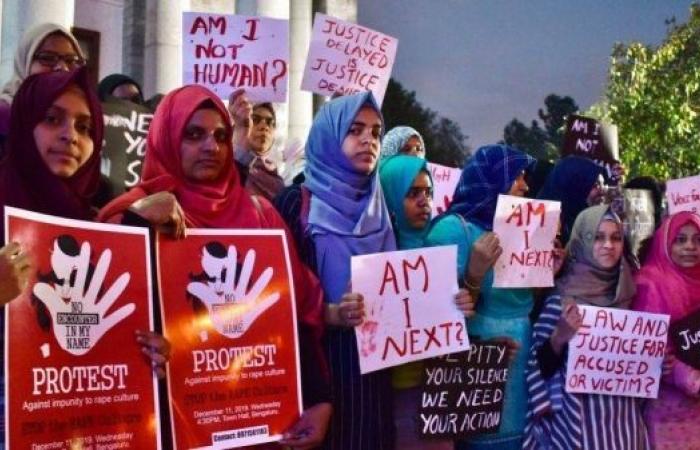 Hind Al Soulia - Riyadh - NEW DELHI — In November Bhavini received screen recordings from her friends in a Clubhouse room with a title that mentioned her underwear.

The live-audio app allows users to start a virtual room or join one in which other people are speaking.

In these recordings, men were auctioning off parts of women's bodies, including hers.

But Bhavini, who lives in India and whose name has been changed to protect her identity, was not surprised.

"Men have been harassing me on the app for months, making rooms using my name at least once a week and calling me worse things. This is the price you pay for being a vocal woman," the 33-year-old policy researcher said.

She is one of at least four women from India's Hindu majority who were offered in a mock auction on Clubhouse that day for around two hours, with over 200 users watching at one point, according to witnesses.

Clubhouse told the BBC later that day, it suspended the accounts of those who made the room and warned, suspended or permanently removed other connected accounts.

The women say that Hindu nationalist trolls on the app have been targeting them for months, branding them as traitors because they have been critical of Indian Prime Minister Narendra Modi and his Bharatiya Janata Party (BJP).

They are not alone in facing harassment. Muslim women living in India, many of them vocal critics of the government, have also been put up for auction online twice in the past six months, resulting in a number of arrests.

In all of these cases, there was no actual sale - the purpose was to harass and silence the women who were targeted.

Critics say the trolling of women, especially Muslims, has worsened in recent years under the BJP. They accuse the party of using its considerable resources to deploy a virtual right-wing army against anyone who takes issue with Mr Modi or his policies.

While the BJP denies the accusation, its leaders rarely condemn the trolling, despite the fact that it's consistently traced back to users who identify as supporters or party workers. In fact, Mr Modi himself has been asked why he follows trolls on Twitter.

While the problem was - and still is - rampant on Twitter, it has also cropped up on other, less public apps, where it's often harder to track such trolls.

When Bhavini and another woman Rekha (whose name has also been changed for this article) joined Clubhouse in 2021, they hoped to talk safely about politics on the app.

The invite-only app became incredibly popular, not just for personal chat rooms and lively discussions, but also as a platform for hearing some of the world's most famous people speak - Drake, Oprah and Elon Musk have all made an appearance.

But the two women discovered that talking about Indian politics was tough - whether it was their support for farmers, who for more than a year had been holding a strike against Mr Modi's government over controversial reforms; their criticism of what they saw as the BJP's divisive Hindu nationalist agenda; or their opinions on the oppressive Hindu caste system.

"The abuse started the day I expressed my political opinion," said Rekha, an IT professional who is also 33.

She and Bhavini say trolls on the app have created accounts using their photos and made rape threats.

"At one point, every time I entered a room someone would verbally abuse me and then leave," Bhavini said. "Right now, there are four fake accounts pretending to be me."

Bhavini and Rekha say they have reported the rooms and the users multiple times but their abusers manage to remain active.

"It feels like a free hand is given to people to issue violent threats," Rekha said.

An official statement from Clubhouse said that the app has "conducted an internal investigation and found that both users have previously filed support requests with Clubhouse on other rooms and subjects, for which they received written responses".

But the auction, the targeted women said, was unlike anything they had experienced before.

Bhavini said the men who participated talked about her breasts and referred to close-up images of her cleavage. These were taken from her Instagram account - from photos where she is wearing a v-neck top or swimwear.

In one recording, a man laughed and bid for her breast milk.

Rekha entered the same room for a few minutes and heard men laughing as they bid on her genitals.

She heard users talk about performing sexual acts as they bid on the women and speak derogatorily about Pakistanis and Sikhs.

"Whoever gives the cheapest rate, I'll give him the vagina. One paisa... half a penny... give her for free," they said.

"I felt violated. This is the filthiest thing I've ever heard about myself, my vagina being auctioned."

Rekha, who knows one of the Muslim women who was targeted, said: "Not long ago, I was consoling her for being auctioned on an app but now it's happening to me.

"Women are treated as commodities in India, to be either glorified or sold when convenient."

Bhavini and Rekha immediately reported the room, but it continued for at least two hours.

The BBC also found that at least one user who was reported to Clubhouse in connection with the auction room is still active on the app under a different account, which was created on the day the auction happened.

"No matter how many times I report a user, nothing changes," Rekha said.

There have been concerns about how to hold people to account on the app since users cannot access old conversations - they are not recorded or made available to play back later.

Clubhouse said it keeps recordings of rooms users complain about for investigative purposes.

It also said that it takes "steps to make it difficult for users who have been indefinitely suspended to return", and it has therefore been able to "remove multiple accounts associated with the creators of the room in question".

But it also pointed out that "as with any online platform, it is an ongoing challenge to keep users who are absolutely determined to create a new account from doing so, but we work to make it very difficult and expensive for them".

Anti-cyberbullying platform TeamSAATH reported the Clubhouse room to the police in November.

"This sort of abuse is not taken as seriously as it should be. We need the relevant authorities to do their job," it said in a statement. — BBC

These were the details of the news Women facing rape threats and abuses on Clubhouse for this day. We hope that we have succeeded by giving you the full details and information. To follow all our news, you can subscribe to the alerts system or to one of our different systems to provide you with all that is new.