What is the relationship of the jewel of Real Madrid to... 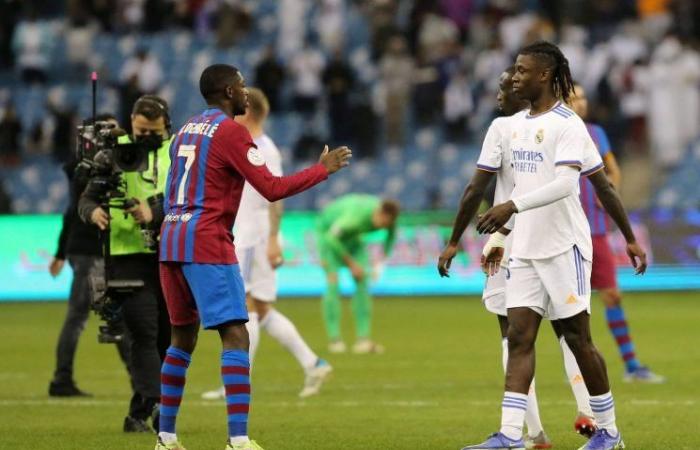 London – “Al-Quds Al-Arabi”: Spanish press sources revealed, the main reason behind the complexity of negotiations to renew the contract of Barcelona wing Othman Dembele, that the language of conversation between the decision-makers in the “Camp Nou” and his agent, Mr. Moussa Sissoko, reached a dead end, as the latter admitted in his appearance The last media.

The French agent abandoned the usual diplomatic method in front of journalists, emphasizing unequivocally that the Blue Grana administration is deliberately losing his client, by refusing most of his conditions for renewal, including the proposed amount of his annual salary, which is estimated at 20 million euros annually, equivalent to 200 million. The same currency over the five years, including taxes, other than the agent’s commission, which will not be less than 40 million in the currency of the old continent.

For its part, the newspaper “Mundo Deportivo” considered the statements of the agent to Radio Monte Carlo “an arrogant and dangerous tone”, as it revealed Sissoko’s intentions and excessive greed for his commission for renewal, and at the same time, he wanted to direct preemptive strikes to President Joan Laporta and his Auxiliary Council. , claiming that the club threatened to freeze his client until the end of his contract, if he did not comply with the terms and policies of Barca.

And many sources in the newspaper quoted “AS” and “ESBN”, that the agent exaggerates his greed in the negotiations to renew Dembele’s contract, to compensate for the heavy loss, which he incurred in late 2020, by losing his commission from the transfer of his former client, Eduardo Camavigna from His former club, Rennes, moved to Manchester United, and this happened after the teenager rebelled against him, by dissolving the agency between them, due to the owner’s desire to wear the Real Madrid shirt.

In the same context, the famous Catalan newspapers indicated that if Dembele believed his promise with Xavi, to remain in the Catalan region until after 2022, it may be a new slap to the latest greedy guests in the world of players’ agents, by the end of his relationship with Othman, as happened with the raw jewel Camavigna, who was favored by British agent Jonathan Barnett, for his good relationship with President Florentino Perez and most elite club presidents in Europe.

It is known that the Barcelona administration has been seeking for a long time to persuade Dembele to secure his future in the club, but until this moment, there has been no tangible breakthrough at the negotiating table, which doubles the doubts about the possibility of his continuation with his club, amid rumors and updated reports at the top of the hour, racing to link his name to clubs The size of Bayern Munich, Chelsea and Paris Saint-Germain.

These were the details of the news What is the relationship of the jewel of Real Madrid to... for this day. We hope that we have succeeded by giving you the full details and information. To follow all our news, you can subscribe to the alerts system or to one of our different systems to provide you with all that is new.