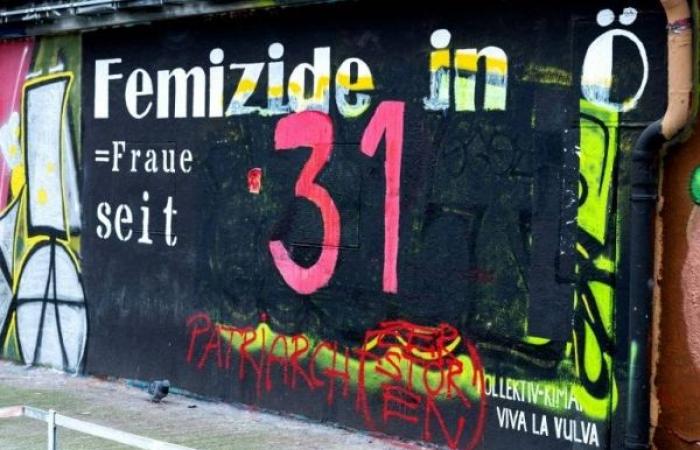 Hind Al Soulia - Riyadh - VIENNA — More women than men were murdered in Austria last year, a rare occurrence in European Union member states, as the country begins to grapple with its femicide problem.

Thirty-one women were killed across the small Alpine country of 8.9 million people — a number inscribed in blood-red at a makeshift memorial listing the femicides committed in 2021.

The figures fluctuate over the years, but between 2010 and 2020, 319 women were killed, mainly by their spouses or ex-spouses, according to a study commissioned by the government. This is one of the highest rates in the EU, according to Eurostat data.

Far from the rallies against this scourge organised in France or Mexico, the subject is barely addressed in Austria. It only came to the fore in the public debate after some particularly sordid crimes.

On 5 March 2021, a 35-year-old woman identified as Nadine W. was strangled with a cable in her tobacconist's shop by her ex-partner and then burned alive. She died a month later in hospital from her injuries.

Then in April, the owner of a beer shop was arrested for killing his former partner, a mother of two children. The 43-year-old man, who has since been sentenced to life imprisonment for these offences, was already known to the public after an elected environmentalist published obscene messages he had allegedly sent her on Facebook in 2018.

Since then, an awareness campaign has been launched and the government has stepped up its efforts, allocating a new budget of almost €25 million in 2022 to combat violence against women.

To ensure that those who have died are not forgotten, Ana Badhofer has begun to list the names of the victims on a wall in the capital.

"Few are outraged" by these crimes "of unprecedented brutality", the activist deplored.

She cites the example of a young woman who was left dying at the foot of an administration building in November after being beaten to death with a baseball bat.

Karin Pfolz, who herself went through hell during the ten years of her marriage, still remembers her extreme loneliness.

"You have no one to talk to. So many of us keep quiet out of shame, out of fear of society's reaction," Pfolz, who now visits schools to share her experience, said.

From the outside, the violence was invisible, the welts hidden. "The black eye is a cliché," she said.

Proportionally, women die far less than in Russia or Brazil, the most dangerous countries, but in such a prosperous and calm country, where laws and a support network exist, the "situation is incomprehensible", Maria Rösselhumer, head of AÖF, the main association running reception centres, said.

There is little explanation for this: many mothers stay at home or work part-time in this Catholic country, and women often cannot afford to leave an abusive partner.

They earn 20% less than men, a pay gap unmatched in the EU except for Estonia and Lithuania.

Under these conditions, few dare to take the plunge because "when you leave, you find yourself on the street with a plastic bag in one hand and your child in the other," Pfolz explained.

When she fled, she felt "like a refugee in her own country".

The AOF's Rösselhumer also mentioned "a real lack of respect and disdain for women" in the political landscape, a machismo that has increased under the coalition that united the conservatives and the far-right between 2017 and 2019.

And while she welcomes the awakening of the authorities, she considers them still "negligent" behind the promises.

Austria was also criticised in December by the Council of Europe's Human Rights Commissioner Dunja Mijatovic, who called for "sufficient resources" and an "ambitious and comprehensive approach".

"It is true that there is a lot of talk about the subject at the moment," Pfolz commented. But even now, "hardly anyone" is concerned about the abuse of women, she said. "Until there is a murder".

The year 2022 had barely begun when the scourge claimed another victim: a 42-year-old woman shot in the head by her husband at the dinner table. — Euronews

These were the details of the news Ultra-safe Austria grapples with femicides as 31 women killed in 2021 for this day. We hope that we have succeeded by giving you the full details and information. To follow all our news, you can subscribe to the alerts system or to one of our different systems to provide you with all that is new.