The goals of the Al-Ahly and Ismaili match in the League... 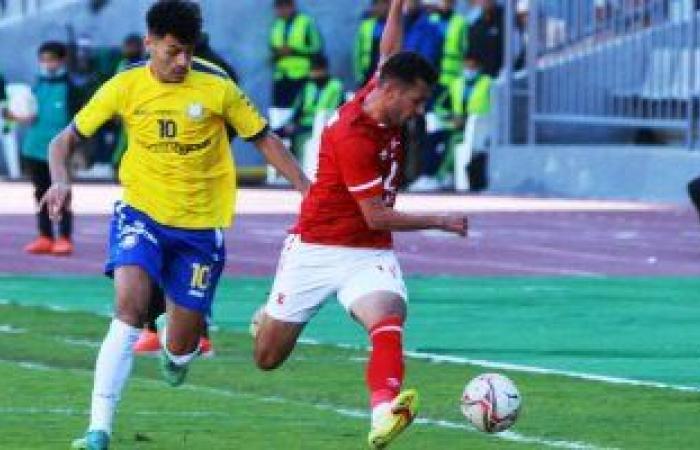 Substitute Ahmed Sayed Gharib, Al-Ahly’s rising player, scored the equalizer for his team in stoppage time against Ismaili in the match that brought them together this afternoon, Monday, at Borg El Arab Stadium in the second round of the second group of the League of Professional Clubs Cup.

The goals of the Al-Ahly and Ismaili match

Al-Ahly played the match with a formation of the youth, as happened in the last El-Gouna meeting in the first round, in which Al-Ahly drew negatively.

Ismaili advanced with a goal by Carmelo in the 16th minute from a perfect header, while Ahmed Sayed Gharib scored the equalizer for Al-Ahly in the third minute of stoppage time after he followed a penalty kick by Jassam Hassan, which was blocked by Ahmed Adel Abdel Aghlamim, the Ismaili goalkeeper.

This brings Ismaili’s balance to 4 points, and Al-Ahly’s balance increases to 2 points.

The match began with enthusiasm from the two teams, and Baher Al-Mohammadi, the Ismaili player, received a yellow card for the roughness with Hossam Hassan, the Al-Ahly striker, and Al-Ahly imposed its control over the first 15 minutes.

Reversing the course of the match, Al-Ismaili scored the goal of progress through Carmelo Algazanza from a header, and after the goal Al-Ahly tried to visit the Dervish net, but to no avail due to the lack of understanding between Al-Ahly players.

The match witnessed an objection from Al-Ahly players to the referee, Muhammad Al-Sabahi, for not expelling Baher Al-Muhammadi, who played coarsely with Hossam Hassan.

Al-Ahly tried to put pressure on Ismaili goalkeeper Ahmed Adel, but the Dervish defense responded to the attacks of Al-Ahmar, and after the first half ended, the Ismaili advanced with a goal.

The start of the second half was enthusiastic on both sides, and despite Al-Ahly’s control, Al-Ismaili’s counterattacks still represent a clear danger to Al-Ahly’s goal.

And the technical staff of Al-Ahly made two changes, with the participation of Raafat Khalil and Ahmed Sayed Abdel Nabi, instead of Ziad Tariq and Muhammad Mahmoud.

The last minutes of the match witnessed Al-Ahly attempts to equalize through Hossam Hassan and Ammar Hamdi, and Al-Ismaili pressed to score a second goal.

The first minute of overtime witnessed the Ismaili goalkeeper block Al-Ahly striker Hossam Hassan in the Dervish penalty area. A thrilling tie between the two teams.

These were the details of the news The goals of the Al-Ahly and Ismaili match in the League... for this day. We hope that we have succeeded by giving you the full details and information. To follow all our news, you can subscribe to the alerts system or to one of our different systems to provide you with all that is new.