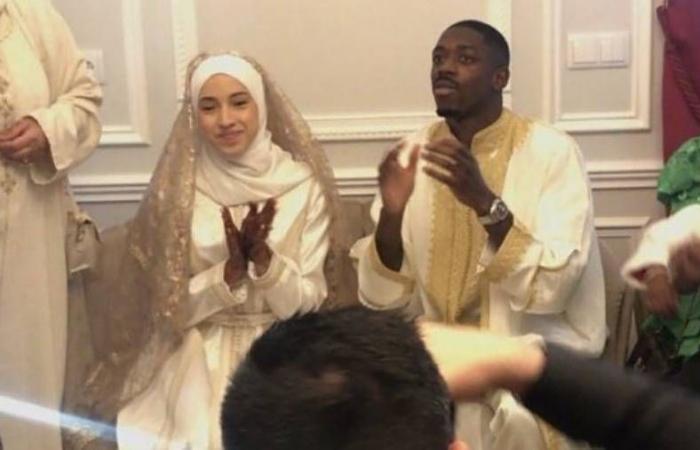 The Gulf – Translations
Frenchman Othmane Dembele, the star of the Barcelona attack, celebrated his wedding to a girl of Moroccan origin.

Media and social networking sites said that Dembele celebrated the wedding in a traditional Moroccan ceremony, and that the ceremony took place in Barcelona.

Dembele appeared in videos on social media, dancing to the rhythm of Moroccan music.

The identity of Dembele’s wife was not revealed, but pages for fans of the French international confirmed that she is of Moroccan origin, as she was wearing the traditional Moroccan dress for women.

The ceremony included the presence of a Moroccan orchestra, which played Moroccan pieces, using drums and musical instruments known in Morocco.

Dembele is 24 years old, and has previously played for French clubs Rennes and Borussia Dortmund, before moving to Barcelona in the summer of 2017.

The French international has suffered injuries since wearing the Barcelona shirt in 2017, as he moved to Barca in a deal worth 135 million euros.

Dembele played only 8 games with Barcelona this season, and did not score any goals, and only made two goals, and criticism is chasing him greatly, because he is not influential with the Blaugrana, in addition to his frequent absence as a result of injuries.

However, Spanish media reports indicated that Dembele is close to renewing his contract with Barcelona, ​​and the official announcement could take place next week.

These were the details of the news Ousmane Dembele celebrates his wedding the Moroccan way for this day. We hope that we have succeeded by giving you the full details and information. To follow all our news, you can subscribe to the alerts system or to one of our different systems to provide you with all that is new.