Watch Dembele’s wedding to a Moroccan girl… and a strange comment... 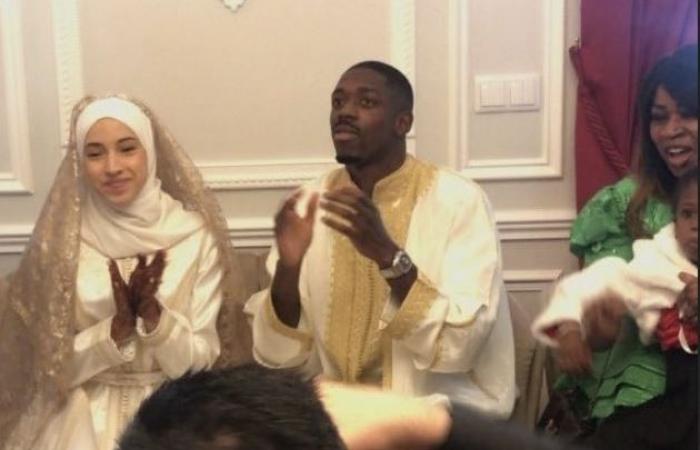 The star of the Barcelona team and the French national team, Othman Dembele, tied the knot with a Moroccan girl, as he shared with his followers on the social networking site, part of the wedding ceremony, which took place in the traditional Moroccan way. Many websites close to Dembele and FC Barcelona published and circulated many photos and videos from the ceremony.

Dembele appeared in a traditional Moroccan dress, next to his wife, as he took advantage of the current football pause on the occasion of the end of the year, to marry him, by holding a party that was limited to their relatives and friends. Dembele did not mention any details related to the location of the wedding ceremony, or the name of the wife and her family. Dembele is originally from Mauritania and Senegal, and has a strong relationship with Morocco for a long time, as he often travels frequently to Morocco.

On the other hand, the Spanish newspaper “AS” commented in a strange way on Dembele’s white suit, hinting that he chose to wear a dress in a color that distinguishes Barcelona’s traditional rival, Real Madrid, while the color of the dress is usual in Moroccan weddings, which is often white, whether For a suit or for any other traditional dress, such as a wedding gown.

Dembele (24 years) recently regained some of his level after a long series of absences as a result of repeated injuries, and Spanish media indicated that he is heading to renew his contract with Barcelona, ​​which expires next June.

These were the details of the news Watch Dembele’s wedding to a Moroccan girl… and a strange comment... for this day. We hope that we have succeeded by giving you the full details and information. To follow all our news, you can subscribe to the alerts system or to one of our different systems to provide you with all that is new.