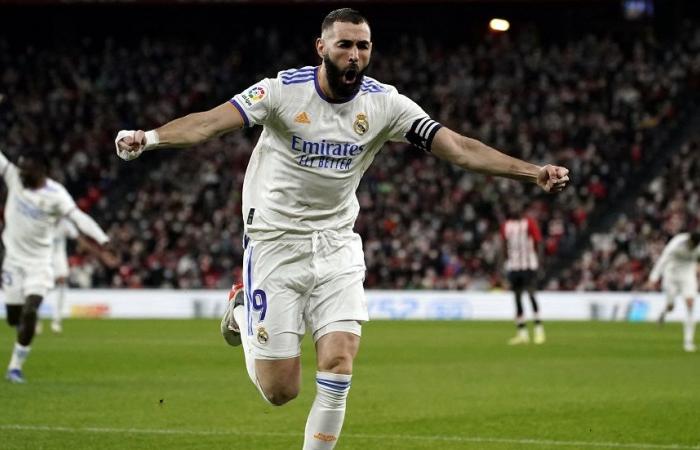 French Karim Benzema repeated a nearly quarter-century-old achievement, after leading Real Madrid to victory over its host Athletic Bilbao, yesterday, Wednesday, in the 21st stage of the Spanish Football League.

Benzema scored two early goals in the 4th and 7th minutes, to contribute to the Royal Club’s 2-1 victory over the Basque team.

And the “Opta” network of sports statistics reported that Benzema became the first player to score two goals for Real in the first seven minutes in a Spanish league match, since September 1994, when Chilean striker Ivan Zamorano scored a double for the royal in the first 4 minutes during the confrontation with Seville in the Andalusian stronghold “Ramon”. Sanchez Pizjuan.”

Benzema is making an impressive performance this season, as he is the top scorer in the Spanish League with 15 goals, and is three goals ahead of his closest competitor.

With its victory over Bilbao, Real Madrid strengthened its lead in the La Liga standings with 46 points, while Athletic Bilbao occupies tenth place with 24 points.

These were the details of the news Benzema repeats a quarter-century-old achievement for this day. We hope that we have succeeded by giving you the full details and information. To follow all our news, you can subscribe to the alerts system or to one of our different systems to provide you with all that is new.