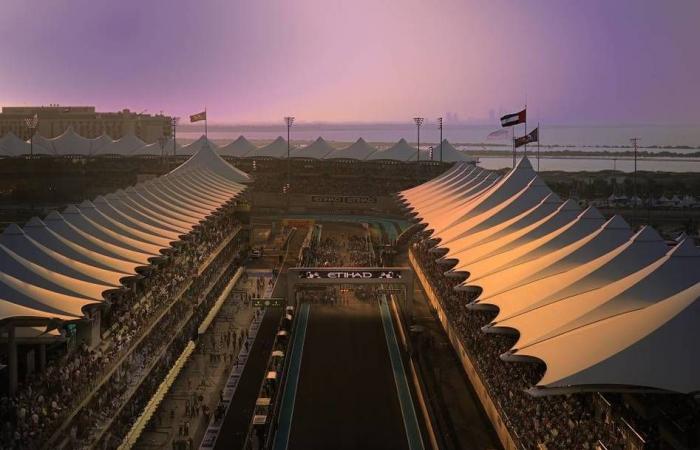 The 2021 Formula 1 Etihad Airways Abu Dhabi Grand Prix is ​​witnessing a decisive confrontation, crowning the winner of the Formula 1 World Drivers Championship this season; Dutchman Max Verstappen and Briton Lewis Hamilton arrive at the Yas Marina Circuit with equal points after a season full of excitement and excitement, for a decisive final match.

This is the second time in the history of Formula 1 that the two contenders for the championship are equal in the number of points before the final race, after the first time in 1974. The Flying Dutchman lands with the champion crowned last season in Abu Dhabi with 369.5 points each in the drivers’ championship.

Verstappen leads the drivers’ standings after scoring 9 victories in the 2021 season, ahead of Hamilton, who scored 8 victories this season and returned strongly during the last three races, recording three consecutive victories in Brazil, Qatar and Saudi Arabia.

With the new modifications to the track of the Yas Marina Circuit, which is expected to add more excitement and provide more overtaking opportunities on its 5.28 km track, the Abu Dhabi Grand Prix is ​​expected to remain in the memory of the Formula 1 fans for many years.

After a dramatic season for the Mercedes team and its 44th veteran, the Briton’s strong performance allowed Max Verstappen to hold the title with Max Verstappen, and if Hamilton scores in Abu Dhabi, he beats Michael Schumacher, one of the greatest F1 drivers, with eight title victories. Formula 1 Drivers’ Championship with the largest number of championship titles in its 70-year career.

In the event that Hamilton wins in Abu Dhabi, he will raise his tally of victories to 104, enhancing his position with the number of victories in Formula 1 races, and registering in his name the fifth consecutive title in the World Drivers’ Championship, and the eighth consecutive title for the constructors for the Mercedes team, confirming the team’s absolute dominance over the competitions of this generation of Formula 1 cars since its adoption in 2014.

Verstappen’s rise to the top of the drivers’ standings this season was expected, and after the Dutchman scored his first victory in the Abu Dhabi Formula 1 Grand Prix in 2020, he aspires to record his tenth victory this season and his first Formula 1 title in his unique career in the world of Formula 1, which I started with Toro Rosso in 2015 when he was 17 years old, the youngest driver to ever compete in the championship in its long history.

After the Red Bull team dominated the Formula 1 championship between 2010 and 2013, during which the team under Christian Horner won the Constructors’ World Championship four times in a row, while the team’s driver, German Sebastian Vettel, dominated the drivers’ title during this period, and Horner seeks to Returning to the top of Formula 1 after an absence of eight years.

After an exciting season that witnessed several controversial moments between the two arch-rivals, including the collisions between them at Monza and Silverstone, in addition to the events that took place in recent races, including the derailment and the collision that brought them together at the Grand Prix in Saudi Arabia, The final race at Yas Marina Circuit promises an unmissable competition.

The redesigned Yas Marina Circuit is expected to present an exciting new challenge for drivers and teams in the crucial final race of the championship. The modifications at the northern sharp bend, the marina turn and the hotel area will open the door to competition and allow more opportunities for overtaking and pursuit. The turn is expected to witness The north and the marina turn in particular is a continuation of this intense competition between the competing drivers.

These were the details of the news Hamilton sets a record and Verstappen seeks first title for this day. We hope that we have succeeded by giving you the full details and information. To follow all our news, you can subscribe to the alerts system or to one of our different systems to provide you with all that is new.