Minsk and Warsaw throwing migrants at each other: makeshift camps and... 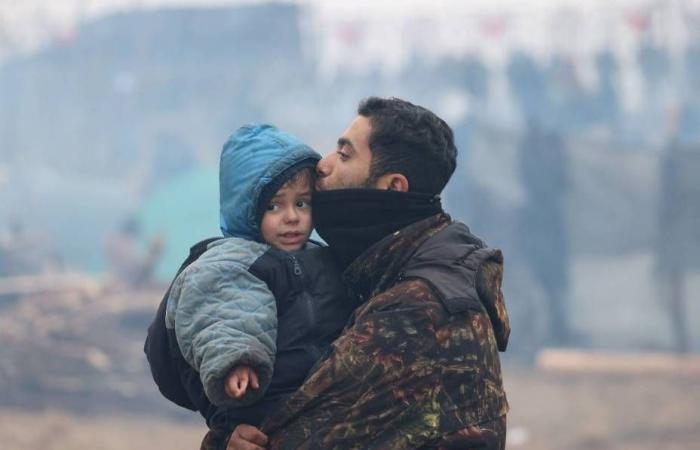 Poland warned on Wednesday that a migrant crisis on its eastern border with Belarus would continue for months or even years, a day after its forces used tear gas and water cannons to deter crowds trying to cross the border. While the two countries continue to toss the crisis without reaching a solution, Belarus has announced the establishment of logistics centers and temporary camps to house asylum seekers and provide them with food and drink. There are fears that these centers will turn into permanent camps.

With the complexity of the situation, German Chancellor Angela Merkel made two phone calls with Belarusian President Alexander Lukashenko, whose regime is not recognized by Berlin.

After clashes yesterday, Polish Defense Minister Mariusz Blaszczak said that further attempts to cross the border took place overnight, in the latest escalation of the months-long standoff on the eastern border of the European Union.

“We must prepare for the fact that the situation on the Polish-Belarus border will not be resolved quickly,” Blaszczak told Polish radio “Jedinka”. We have to prepare for months or even years.”

He added that attempts to cross the border are continuing, and that the migrants used the same method of attacking the Polish border, as happened on Tuesday at the Brozje-Koznica crossing. “Public attention focused on what happened in Koznica, while smaller groups of migrants tried to break through the Polish border in other sections, also during the night,” he said.

Thousands of migrants, mostly from the Middle East, are staying at the border in the hope of entering the European Union, and the West claims it is a crisis orchestrated by Belarus in an attempt to pressure the European Union and respond to sanctions. But Belarusian President Alexander Lukashenko rejected the accusations and criticized the European Union for not accepting migrants.

Yesterday, Lukashenko instructed the governor of the Grodno region bordering Poland to open a “temporary” shelter center tasked with providing mattresses, clothes and meals for those stranded at the border.

Official sources indicated that the center houses about 1,000 people, including women and children, and portable toilets were installed inside it, along with waste containers, in cooperation with the Red Cross.

Lukashenko had his second phone call since the weekend with German Chancellor Angela Merkel about the migrant crisis.

The Belarusian presidency said, in a statement issued yesterday, Wednesday, that Lukashenko and Merkel discussed in detail the issue of migrants wishing to enter the European Union, and reached a certain understanding on how to act to continue moving forward in settling the outstanding issues.

According to the statement, Lukashenko and Merkel agreed to raise the issue of migrants to a level between Belarus and the European Union, and to appoint officials from both parties who will immediately launch talks to resolve outstanding issues. “In this context, a decision will be made on the refugees’ desire to go to Germany,” the statement said.

The statement indicated that the German Chancellor conveyed to the Belarusian President, during the call, the appeal of European Commission President Ursula von der Leyen, regarding the necessity of the participation in this process of international organizations concerned with asylum and migration, which have begun their active cooperation with the Belarusian side.

Lukashenko and Merkel agreed, according to the statement, to make new contacts in the future.

The German side did not immediately comment on the new call between Merkel and Lukashenko.

German government spokesman Steffen Seibert said, earlier yesterday, that Seibert confirmed that the first call between Merkel and Lukashenko took place in close coordination between Berlin and the European Commission.

These were the details of the news Minsk and Warsaw throwing migrants at each other: makeshift camps and... for this day. We hope that we have succeeded by giving you the full details and information. To follow all our news, you can subscribe to the alerts system or to one of our different systems to provide you with all that is new.